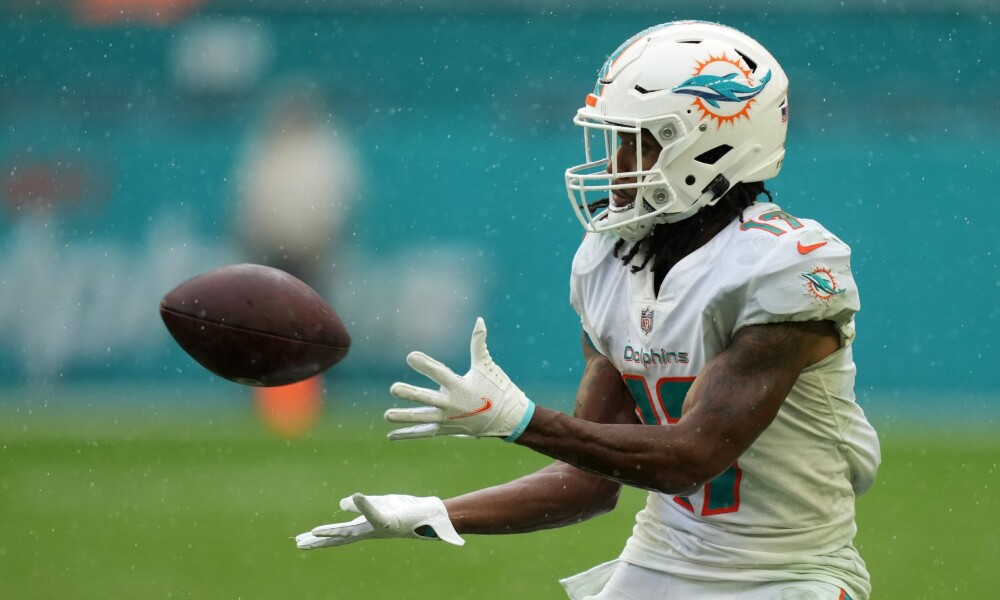 What are Air Yards? And why you should pay attention.

Air yards are simply the distance a ball travels in the air past the line of scrimmage.

What are air yards, and how can we use the stat to our advantage?

Air yards have become an increasingly used and popular stat to track in the NFL and have gained more attention of late as analytics has become a bigger part of the game. While air yards sounds like a broad and sometimes complicated term, it’s actually quite a simple stat when we break it down.

Air yards is a stat that was created by Josh Hersmeyer and has become a popular stat in the NFL, especially in season-long fantasy football and daily fantasy football formats. Air yards and other similar stats, like aDot (average depth of target), give us a basic picture of a receiver's opportunity, and which players on a team’s roster a QB/Head Coach is most intent on targeting downfield. In this sense, air yards are a good indicator of a player’s usage, but also what his actual fantasy upside might be for future games.

How are air yards measured?

Air yards are measured from the point that the football crosses the line of scrimmage, in the air, to its landing spot on the field. Whether the pass was completed or not is irrelevant when calculating general air yards, although there are metrics that track Completed Air Yards (CAY) and Unrealized (incomplete) Air Yards (UAY or IAY).

What are completed air yards?

Hence, if there is a large discrepancy between a WR’s completed air yards and his actual receiving yardage, you know that the player has compiled a lot of yards after catch (YAC) that season. In some cases, players with high YAC metrics can be good fades as those yardage numbers are often inflated by one or two broken or lucky plays.

What are incomplete air yards?

Completed yardage totals only give us a basic picture of how a game went and can be skewed by short catch-and-run touchdowns or other broken plays. Looking at incomplete air yards gives us a better idea of who is receiving the downfield opportunities and, for that reason, can also be a good predictor of future fantasy breakouts.

Why do air yards matter?

Air yards act as good upside predictors in fantasy football. They give us insight into how a player is being used. If a player has compiled high after-the-catch yardage totals through a couple of games but is showing only moderate or below-average air yard totals, we know that player could be in for some regression, as after-the-catch yards tend to be more unreliable and can be built up through broken or fluke plays.

Running backs with very low air yard totals, who have piled up a couple of big games receiving, tend to be popular regression candidates in PPR formats, although many (like Christian McCaffrey) remain some of the strongest after-the-catch producers in the league as well.

On the flip side, if there is a player who is trending with below-average actual receiving yards through a couple of games, but has above-average to elite air yard stats, then we know that player could be in for bigger games down the road (a.k.a positive regression).

As alluded to here by the creator of air yards himself, a player with high air yards is earning those yards both by gaining the trust of the coaching staff with his performance (in practice or in-game) and by catching the attention of their quarterback, in-game, by getting separation from the opposition downfield. Since the receiver is gaining those kinds of downfield targets consistently (and we can identify this to be true through his air yards) the idea is that eventually, those opportunities will translate to bigger fantasy plays and, potentially, some long touchdowns down the road.

While many receivers and quarterbacks who are producing big air yards are often already up among the league leaders in fantasy points, there are many whose actual fantasy performances tend to lag behind. In many instances, we can use air yards (and a player’s team air yards market share) to try and predict if a specific receiver is worth betting on for a breakout.

For example, if receiver A is seeing fewer targets than his teammate, receiver B, but is also outproducing receiver B in air yards, we know that, eventually, the production between the two players is likely to even out.

Even if receiver A isn’t getting the same number of targets as receiver B, and has a worse conversion rate on his targets, the chances that he’ll eventually break out for a big game are still high due to his larger team share of air yards, which tell us he’s seeing better targets, downfield.

For daily fantasy football purposes, air yards can also often be key in helping us unearth lower-owned wide receivers with upside for our large field GPP lineups. In 2021, Tyler Lockett emerged as just such a player. Lockett made multiple appearances in the winning millionaire-maker lineups on DraftKings, landing in the winning lineup in both Week 2 and Week 18. 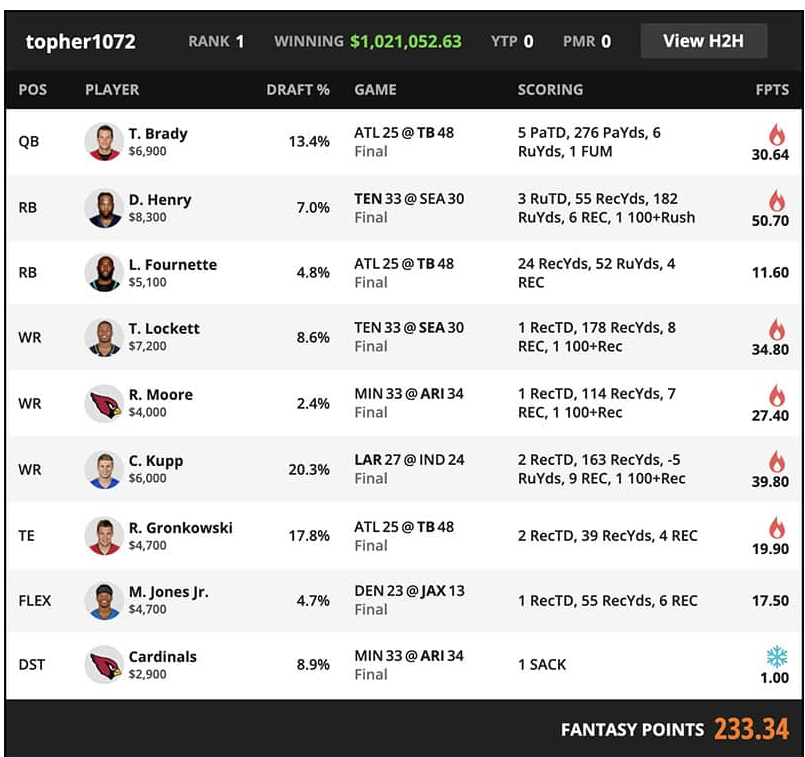 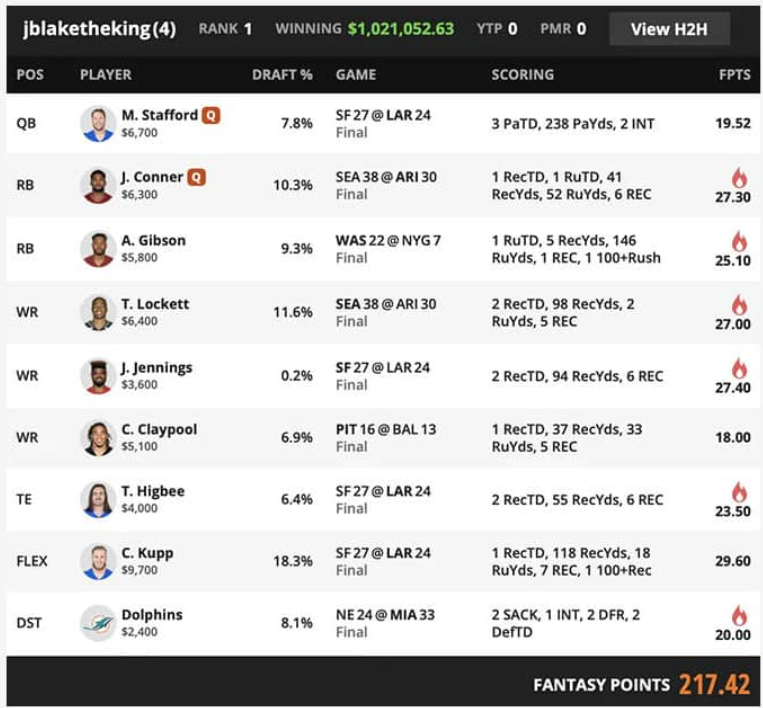 While a lot of research would have led you off the Seahawks receivers (due to their offense being tilted toward the run, and the fact they dealt with QB injuries in 2021) Lockett’s air yards suggested he was a player you should have been using. He not only ended the year in the top 10 in air yards among all WRs, but was also top 10 in team air yards market share. Lockett was also efficient with his air yards as he led the league with 20 receptions of 20 or more air yards in 2021.

Using air yards then can not only help you look for true upside plays in daily fantasy, but will also help you identify potentially undervalued players in your season-long redraft leagues as well. Identifying players like Lockett, who may be viewed negatively (despite having great air yard indicators), can help give you an edge in trade discussions or waiver decisions throughout the year.

For betting purposes, air yards can also be useful, especially when looking at player props. Receivers with solid air yards, coming off a few slow games, can often have suppressed yardage or long reception props. On the flip side, running backs who have compiled a couple of big receiving games (in terms of yardage), but have low air yard totals, could be good under targets in the future if their prop totals get too inflated.

Using air yards to identify players who might be on the verge of a big game – or on the verge of yardage regression – and look undervalued in the player prop market, is an effective way to put the stat to use.

What do QB air yards tell us?

Last year, Tom Brady led the league in air yards and ranked third in fantasy points on the season.  In fact, of the top eight fantasy quarterbacks from 2021, only one (Aaron Rodgers) ranked outside of the top 10 in QB air yards. 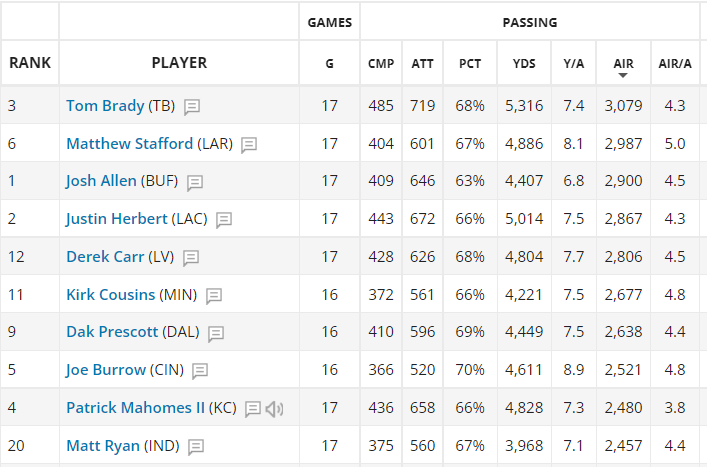 While efficiency stats like completion percentage and interception rate can be useful to track, air yards are simply a better predictor for most QBs, and their overall fantasy prospects. Even if a player is near perfect in every other aspect (as Rodgers nearly was in 2021) his upside will ultimately be limited by his lack of big-play opportunities.

A receiver’s air yards market share is important in understanding his role on the team. A receiver who commands a huge portion of his team’s air yards is obviously not just getting occasional downfield targets but is likely getting targeted all across the field and at a high rate as well.

The bigger a player’s market share of air yards on his team is, the more likely it is that he’ll continue to produce big games. Players with smaller market shares, or who have teammates with similar air yard market shares, will simply be at a bigger risk of regression from week to week. Those players will always be at risk of seeing their teammate convert on a significantly larger number of big plays, than they do, for at least a game or two during the year.

Thus, players with larger air yards market share tend to be in more dominant positions for fantasy purposes and are often ultra-valuable as a result.

What are intended air yards per attempt?

Intended air yards per attempt (IAY) are simply the air yards a quarterback gained on all of his pass attempts, regardless of whether the ball was complete or not. Intended air yards for QBs are just another way to state general air yards, which include completed and incomplete passes.

What are unrealized air yards?

In 2020, both Calvin Ridley and Jerry Juedy ranked highly in unrealized air yards but Ridley had far more completed air yards than Jeudy, thanks mainly to being attached to a more accurate QB in Matt Ryan. This situation from 2020 is also why it’s important to recognize receivers who are going to new offenses or teams, and potentially getting a quarterback upgrade (or downgrade).

Wopr stands for Weighted Opportunity Rating. It is another stat that stems off of the air yards tree and was also created by Josh Hermsmeyer. Wopr is a weighted average that incorporates a player's total target share from his team (a.k.a the percentage of targets a player sees on his team) AND his team air yards market share.

The stat is calculated as such:

Wopr is used to help identify potential breakout candidates but is also meant to be viewed alongside a player’s actual PPR production in fantasy. While players with solid air yards could be breakout candidates, players with higher Wopr are those who will likely give you elite, sustainable production throughout the year. Since it accounts for target share and air yards, it’s often also a good stat to use to help identify a team’s true number one receiver. Elite WRs tend to push for a Wopr of 70.0 or better.

Racr gives us a glimpse into how efficient a player is with the air yards he’s targeted with. Players with higher Racr’s will often have solid conversion rates on their targets and also tend to create more yardage after the catch. This stat uses air yards to give us a glimpse into receivers who don’t just get targeted a lot downfield but are also good at converting on their targets and at creating yardage, after the catch.

In many ways, Racr can identify players who may be studs in waiting. A player who doesn’t have high targeting (or a big team target share), but is still producing a high Racr, is an efficient producer and player who may turn into a higher end fantasy player if his opportunity increases.

For more on aDOT, check out our Advanced Receiving Table.