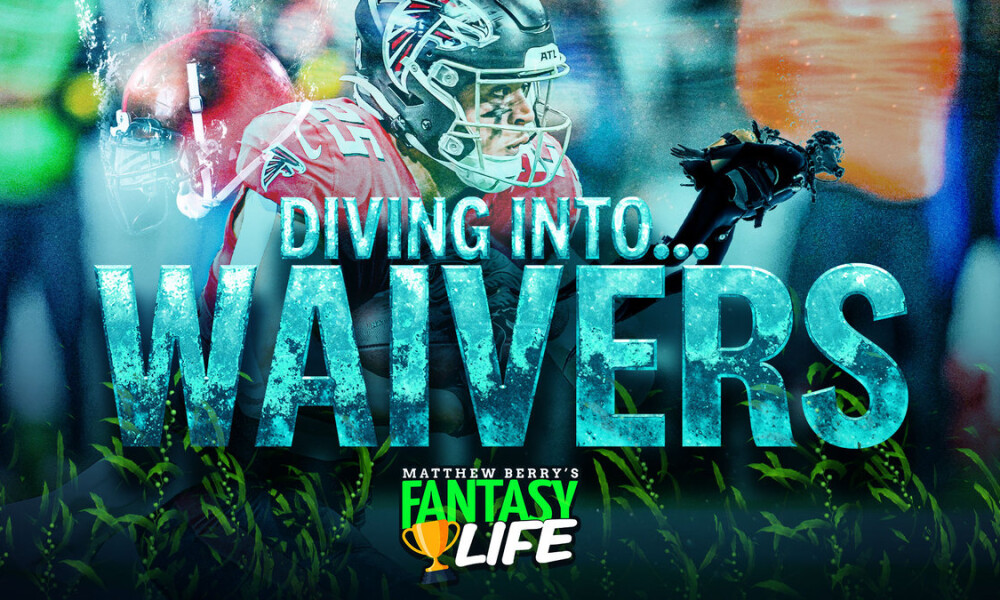 The fantasy football championships have arrived.

Take a moment to look at your roster. Is it the same one you left your draft with? I’m guessing not. For yet another year, being active on the waiver wire likely played a significant role in you reaching this point.

Whether you lost Cooper Kupp or Jonathan Taylor, or spent premium picks on Rashod Bateman or Elijah Moore, you’ve had to remain active this season.

This is what we’ve been building towards all season. For one more week, let’s put the finishing touches on your squad and go win this thing.

I'll be using Yahoo's "percentage rostered" data. Players are listed in order of priority, by position.

RB Tyler Allgeier has quietly put together an impressive rookie campaign. This week, he set career-high marks in rushing attempts (18), targets (5), and receptions (4) and brought his season total to 817 rushing yards in just 14 games.

On Saturday, he handled 62% of the RB rushing attempts and figures to remain heavily involved with rookie QB Demond Ridder likely starting the rest of the season.

Looking ahead, Allgeier will take on a Cardinals defense that has struggled to contain the run. Entering Week 16, they ranked 25th against opposing RBs per our NFL DvP tool.

Even with the Commanders benching QB Taylor Heinicke and switching back to QB Carson Wentz, fantasy managers shouldn’t be concerned. Dotson has demonstrated fantasy success with both QBs and is a must-start moving forward.

The New York Jets defense has been as good as advertised, especially against opposing WRs. You shouldn’t use that to discount talented players like WR DJ Chark.

Chark posted a dud against the Jets in Week 15 but bounced back this week. Over his last five games, Chark has either a receiving TD or 95+ receiving yards in four of them.

He plays the WR2 role alongside teammate Amon-Ra St. Brown but Chark’s downfield playmaking ability should keep him up in your lineups next week.

I’m surprised his rostered percentage is this low, but RB Zack Moss is still a priority pickup.

The third-year tailback earned a whopping 24 carries after the departure of starting RB Jonathan Taylor (ankle) in Week 15. Moss also outpaced fellow RB Deon Jackson in every meaningful metric including red zone snaps, rushes, and snaps in both short and long down and distance.

While a committee approach is likely, it’s worth noting the sheer volume of opportunity Moss earned over Jackson.

Veteran RB Gus Edwards has been serving as the compliment to RB J.K. Dobbins since the latter returned from injury three weeks ago. However, Edwards is averaging 73 rushing yards per game over the last three games.

Not bad for the RB2 on his own team.

It remains to be seen if QB Lamar Jackson (knee) will return in Week 17. Regardless, Edwards has demonstrated consistent usage in a run-first offense and needs to be rostered in more leagues.

It’s been tough to know when to start RB James Cook. Just when we think he’s trending in the right direction and posts a solid line, he duds the following week.

For example, Cook turned 11 carries into 86 yards back in Week 11. Here are his rushing numbers since.

It’s been maddening for fantasy. In that span, he had just one TD (through the air). This week, he racked up a season-high 99 yards on 11 carries. He also found the end zone and played 26 snaps (PFF).

What are we supposed to do? Cook has the situation, talent, and upside to help you secure your title. He carries significant risk but now is not the time to play it safe.

Veteran WR Russell Gage has been quietly solid lately. He has three TDs in his last three games and 18 targets over his last two. Even with fellow WR Julio Jones suiting up this week, Gage still earned 22% of the WR target share and 40% of the WR receiving yard share.

The Buccaneers offense hasn’t been as potent as years past, but QB Tom Brady is still averaging 44 passing attempts and 278 passing yards per game. There’s plenty of opportunity for a dependable option like Gage to carve out value in PPR formats.

In three of his last four games, RB Chuba Hubbard has 12+ rushing attempts and 65+ rushing yards. Despite playing second-fiddle to fellow RB D’Onta Foreman, Hubbard continues to carve out fantasy value on a roster devoid of talent.

The Panthers do face a stout Buccaneers run defense next week (No. 6 per our DvP tool) so expectations should be tempered. Still, he’s a worthy stash as your team gears up for the fantasy championships.

Let’s have some fun with a speculative stash.

WR Greg Dortch was the main beneficiary of third-string QB Trace McSorley starting on Sunday night. In an overtime performance, Dortch posted a line of 10 / 98 on 11 targets. He also tacked on 25 yards on three rushing attempts.

If McSorley gets the call next week, it’s quite possible he looks Dortch’s way early and often.

It’s been an eventful season trying to decipher the Giants WR room but we’re finally getting some clarity.

WR Isaiah Hodgins has 4+ targets and 30+ receiving yards in five straight games. It doesn’t sound like much at face value but he’s averaging 15.4 fantasy points per game since Week 13 thanks, in part, to three total TDs.

The Giants have scored 20+ points in five straight and are in the thick of the NFC playoff race. Expect more opportunities for Hodgins next week.

The same logic for Hoggins applies to James. The team has no clear-cut No. 1 option at WR and, aside from RB Saquon Barkley, is desperate for consistent playmakers. James has been answering the call and should continue to do so.

Rookie WR Romeo Doubs is more of a speculative stash depending on the health of fellow rookie WR Christian Watson (hip). Doubs has flashed potential at times this year but missed four games due to injury from Weeks 10-13.

In his two games back from injury, he has 11 total targets and is earning the trust of QB Aaron Rodgers. With the Packers needing to win-out to have a shot at the playoffs, expect more opportunities for Doubs both next week and beyond.

“Mr. Irrelevant” has four consecutive games of 20+ fantasy points and he’s thrown exactly two TDs in each of them. As we’ve mentioned, the combination of offensive talent, coaching, and scheme make for the ideal QB situation.

Next week, Purdy & Co. take on the Raiders. Las Vegas is giving up over 23 points per game on the season which ranks 22nd in the league.

The trend of streaming defenses playing against the Houston Texans continues.

The Jaguars are fresh off their best defensive performance of the season in which they held the Jets to just three points. On the season, the Jacksonville defense has racked up 29 sacks, forced 23 turnovers, and scored two TDs. They are also the No. 7 ranked defense in fantasy.

In their first meeting, the Jaguars held Houston to under 250 yards of total offense and just 13 points.