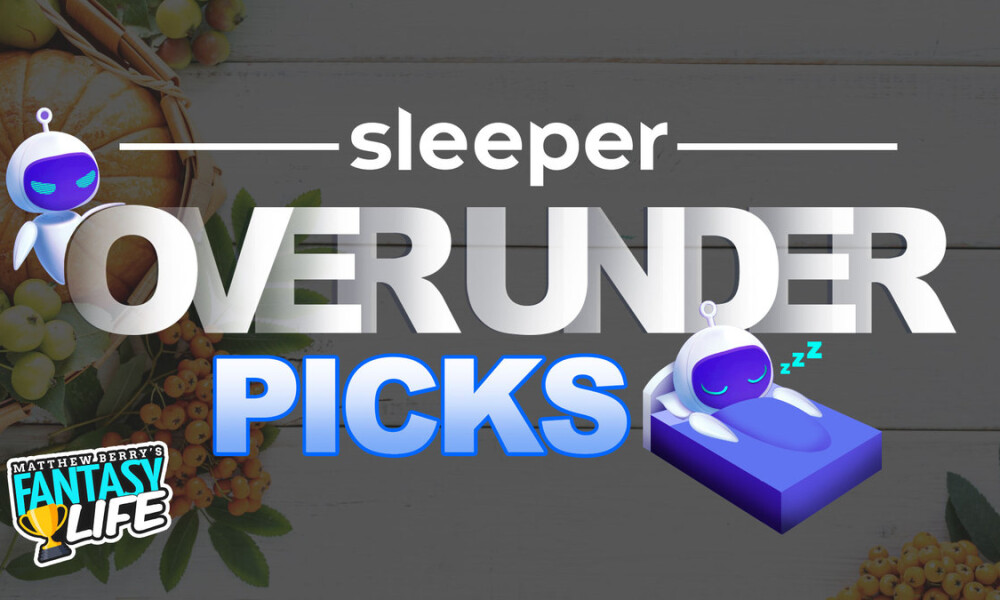 Player props are increasingly popular, and Sleeper Fantasy is one of the newest platforms to get in on the fun. Here are our favorite picks for the Thanksgiving day games.

Player props are becoming an increasingly popular market, and Sleeper Fantasy is one of the newest platforms to get in on the fun.

You may have heard of Sleeper previously – you might even play in a fantasy league hosted by Sleeper – but did you know that they also offer over/under contests? The format is simple: pick your players, pick the category, and choose whether or not they’ll go over or under the listed number. The more picks you add to your card, the bigger the potential payout.

For more information on Sleeper over/under contests, make sure to check out our review. You can even grab a promo code to match a first-time deposit of up to $100.

That was a lot to digest, so let’s get to some Thanksgiving Day picks below!

The Cowboys have finally experienced what life is like with Tony Pollard as their feature back, and that life is quite good.

Pollard comes into this game averaging 6.39 yards per carry over his last three games, in a stretch where the Cowboys' offense has also averaged an insane 39.0 points on the scoreboard. As Fantasy Life’s Dwain McFarland noted in the Week 12 Utilization Report, Elliott’s return saw him split carries with Pollard inside the five-yard line, but Pollard’s efficiency should allow him to keep a stranglehold on the majority of the work everywhere else.

With Elliott still banged up and sporting a knee brace, Pollard seems set for another game with heavy usage as a rusher. The game flow should also produce a few extra carries as the Cowboys currently sit as 9.5-point favorites, a line that has moved -1.5 points in their favor since the start of the week.

The other side of the ball should also help contribute to an efficient performance from all Dallas rushers. The Giants were decimated on the injury front against Detroit last week and come into this game ranked second to last in yards per rush attempt against.

Pollard’s Fantasy Life projection has him going into the low 70s for rush yards in this game, and the Sleeper.com Over/Under on Pollard’s Rushing Total is also slightly below other Totals we’re seeing on him across the industry.

The bottom line: The Cowboys' offense has no reason to let up against a division rival this week. Pollard’s an elite rusher whose snap count and usage should remain steady against a crumbling Giants defense. Play the over on him while his Totals are still somewhat suppressed.

The Cowboys' efficiency on offense over their last four games means we can and should be expecting multiple big performances from their star players against New York. Dak Prescott enters this game having averaged 271 yards passing over his last two games and has been a beacon of efficiency, completing over 75% of his passes in three of his last four starts.

The 29-year-old has been on a tear, and this run seems unlikely to stop against a Giants team who will be without top CB Adoree Jackson and who also have two other DBs trending as questionable for this week’s game.

Also, if you believe in the idiom that “clothes make a man,” then the fact Prescott and the rest of the Cowboys offense will be in these fire helmets on Thanksgiving should have us bullish on another big game.

The bottom line: Everything is trending the Cowboys' way for Turkey Day (even the uniforms). Prescott proved last week that even on limited dropbacks, he can smash this Passing Total out of the water, and with the projections in his favor again, there’s no reason not to ride the over-180 yardstrain one more time against New York.

The Bills RBs uncharacteristically ran for 180-yards last week against Cleveland, a performance that they seem unlikely to replicate this week against Detroit. The Lions' Defensive line has shown solid improvement of late and has now allowed just 3.36 yards per carry over their last three games to opposing RBs.

When it comes down to it, the Bills are also a team who want to pass the ball.

The Bills have attempted 37.5 pass attempts per game this year and last week represented just the second time all season that Devin Singletary breached the 15-carry mark in a game in 2022. Singeltary’s snap count is also potentially ripe for regression this week as rookie James Cook had a standout performance against Detroit, going for 86 yards on just 11 carries, and will certainly demand a few more looks this week.

The bottom line: Trust the projections. The Lions have been a funnel-to-the-pass kind of defense of late, and the Bills should look to take advantage with their receivers and naturally dial back Singeltary’s yards on the ground.

The great thing about Sleeper and their Over/Under contests is that they give us a great selection of props every week. That means we don’t just have to make our lineups based on star players but can look for stronger edges down the depth chart. This week, the projections are telling us that there’s a nice potential edge to be found by fading the Giants' TE position and, specifically, this prop on Lawrence Cager.

Cager has filled in admirably for Daniel Bellinger, but there are clearly some limitations with what we can expect from him. Even on a snap count that’s topped 70% in the last two games, Cager has only earned himself five targets and put together four catches for a paltry 7.25 yards per catch over that span.

While the Giants have made Cager their feature TE, there’s also a player lurking behind him on the depth chart with experience.

Tanner Hudson had seen eight targets in the two games prior to Week 11 (where he was shut out). Hudson has also averaged 13.5 yards per catch over his career and profiles as a better pass catcher of the two, so it’s more than plausible the Giants will look to insert him more with Wan’Dale Robinson out.

The bottom line: Cager is limited, and the Giants are up against one of the best pass defenses in the league this week. Fade this inflated total on Thanksgiving.

If you play on Underdog, check out my Pick'em Best Plays for the slate.