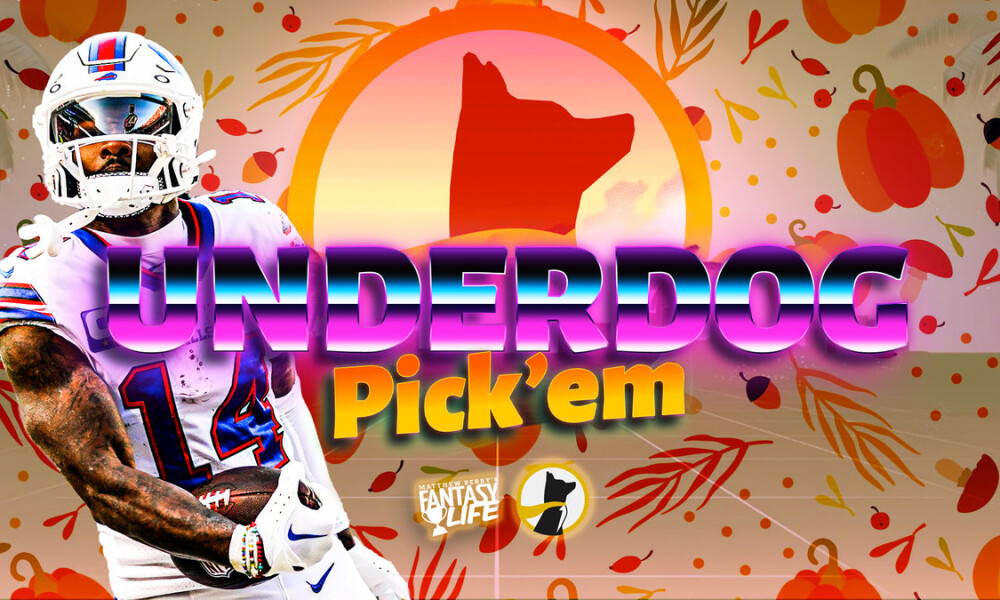 Player props are increasingly popular, and Underdog Fantasy is one of the newest platforms to get in on the fun. Here are our favorite picks for the Thanksgiving Day Games.

Underdog Fantasy is one of the fastest-growing companies in the industry and home of some of the world’s largest best ball contests. Underdog also has another feature on their site called pick'em contests which work very similarly to traditional prop bets, with players having specific lines set in a variety of categories. You can then pair up to five of these selections together for up to a 20x return on your investment. To learn more about Underdog, and the different ways you can play check out our guide.

If you’re new to Underdog Fantasy, make sure to take advantage of a first-time deposit match of up to $100. Just sign up using our link or by entering promo code LIFE.

Down below, I’m going to dive into four of my favorite selections for Thanksgiving contests on Underdog. Let’s Go!

Diggs had a surprisingly slow day against Cleveland in Week 11, a game in which he was targeted just five times and produced 48 yards on four receptions. Despite their success running the ball against Cleveland (their RBs totaled a season-high 180 yards on their own), Buffalo seems unlikely to replicate that performance against Detroit. The Lions D-Line comes in showing vast improvement of late and have allowed just 3.36 yards per carry to opposing RBs over their last three games.

That should mean a return to the norm for Diggs in Week 12, who has averaged 9.4 targets per game in 2022 and has an elite 27.7% team target share on the season. Diggs has already gone over his Thanksgiving Day total in seven of 11 games this season and faces a Lions defense that is still hemorrhaging big plays in the secondary, allowing a league-worst 7.8 yards per pass attempt against. Entering this game, the Lions have also allowed the fourth-most receiving yards to opposing WRs, and after last week’s 100-yard game by Wan’Dale Robinson, have now yielded 100-yards or more to an opposing WR six times. This is not great.

Also helping push Diggs to the over this week will be the matchup and the regression of his own team’s defensive unit. Both the Lions and Bills rank in the top 10 in situation-neutral pace of play, and Buffalo’s defense has been uncharacteristically lax against the pass themselves of late, allowing 7.9 yards per attempt last week to Jacoby Brissett. It all adds up to Diggs seeing more targets and acting more as the focal point of the Bills' offense on Thanksgiving. Look for a pass-heavy game from Buffalo and for Diggs to go over his Underdog receiving yards line against Detroit.

The entire deck is stacked against Daniel Jones at the moment. He lost his leading receiver Wan’Dale Robinson for the season last week to an ACL tear and also saw starting Centre Jon Feliciano (neck) and starting right tackle Tyre Phillips (neck) leave last week’s game with injuries. It’s terrible timing for both Jones and the Giants as they’ll be facing a Cowboys squad who ranks top 10 in defensive rush and pass DVOA – and who leads the league with an average of 4.2 sacks per game.

Jones finally broke out as a passer last week, but it was also against the Lions, a team that has allowed the fifth-most passing yards this year. Dallas has allowed just 5.4 yards per pass attempt this year at home and ceded the third-fewest passing yards in the league to date.

From a pure performance perspective, QBs against Dallas have already hit the under on this mark (192.5) four times this season, and Jones, even with his 341-yard game last week, has still averaged just 193.7 passing yards per game in 2022.

The Dallas defensive buzzsaw limited Kirk Cousins to just 105 yards on 23 attempts (4.54 yards per attempt) before he got the mercy pull in the second half of Week 11. A similar fate may await Jones, who has no elite WRs and will likely be focusing on survival rather than stacking up meaningless stats late in this game.

Schultz enters Thanksgiving having received 20 targets over the Cowboys' last three games, good enough for a 20% team target share which ranks second among all Dallas pass catchers over that stretch. Schultz’s mid-season resurgence has been helped by his QB Dak Prescott, who has been brutally efficient of late, landing an over 76% completion rate in three of his last four games – while averaging an elite 8.54 yards per pass attempt.

Recent performances aside, the Giants also make for a solid matchup for Schultz. They’ve allowed the ninth most receiving yards to opposing TEs this year and a big 11.39 yards per reception mark to the position as well.

New York is also dealing with multiple injuries in the secondary for this game, with CB Adore Jackson having been ruled out multiple games and both DBs Fabian Moreau and Jason Pinnock looking questionable for this week.

Despite his increased usage and the sterling play of his QB, Schultz’s prop remains low at under 40 yards. He gained over 60 yards receiving in both his games against New York last season and has gone over this mark in 16 of his last 23 regular season games dating back to the start of last season.

Take the over on Schultz’s receiving numbers for a happier-than-normal Thanksgiving.

Meyers has been the Patriots' most efficient receiver this season. The 26-year-old has put up 52 yards or more in six of the eight games he’s played and has been the only WR on the Patriots to receive more than five targets in each of the past three games. New England also moves from frigid temperatures to a dome environment this week, and that should help free up some targets for Meyers, who is playing against a secondary in Minnesota, who ranks second-last in yards per pass attempt against and has given up the third most receiving yards to opposing WRs this year.

The Vikings' faster pace of play, and their weaker secondary, have also led to opponents attempting more passes.

Teams who have faced Minnesota in 2022 are now averaging 35.2 pass attempts against them, and the Vikings, as a team, have also allowed the third-most passing yards on the year. New England may be near the bottom of the league in terms of overall pass attempts per game, but Meyers’ work has still allowed him to average a semi-elite 8.33 targets over his last three starts. With Minnesota’s offense likely to bounce back after such a terrible Week 11, look for a faster-paced game to develop and Meyers to potentially even push for the century mark in overall yards.

If you play on Sleeper, check out my Over/Under Picks for the slate.