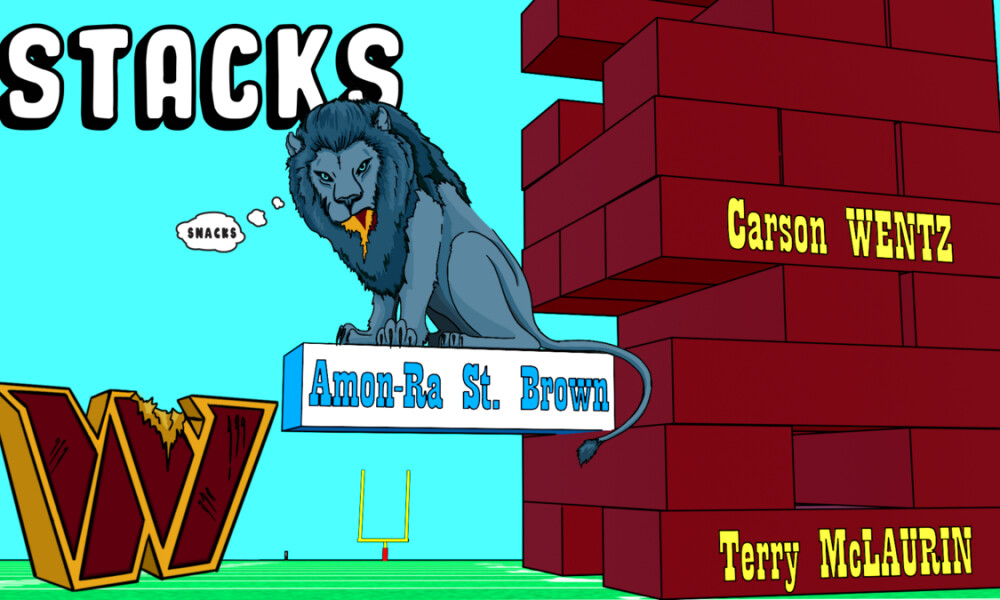 Here's how to replace them...

The slate has been flipped on its head...

It didn't take long for us to get a quintessentially chaotic week of NFL action.

In addition to everything in this newsletter, FantasyLife.com is your one-stop shop for all of your lineup setting needs: 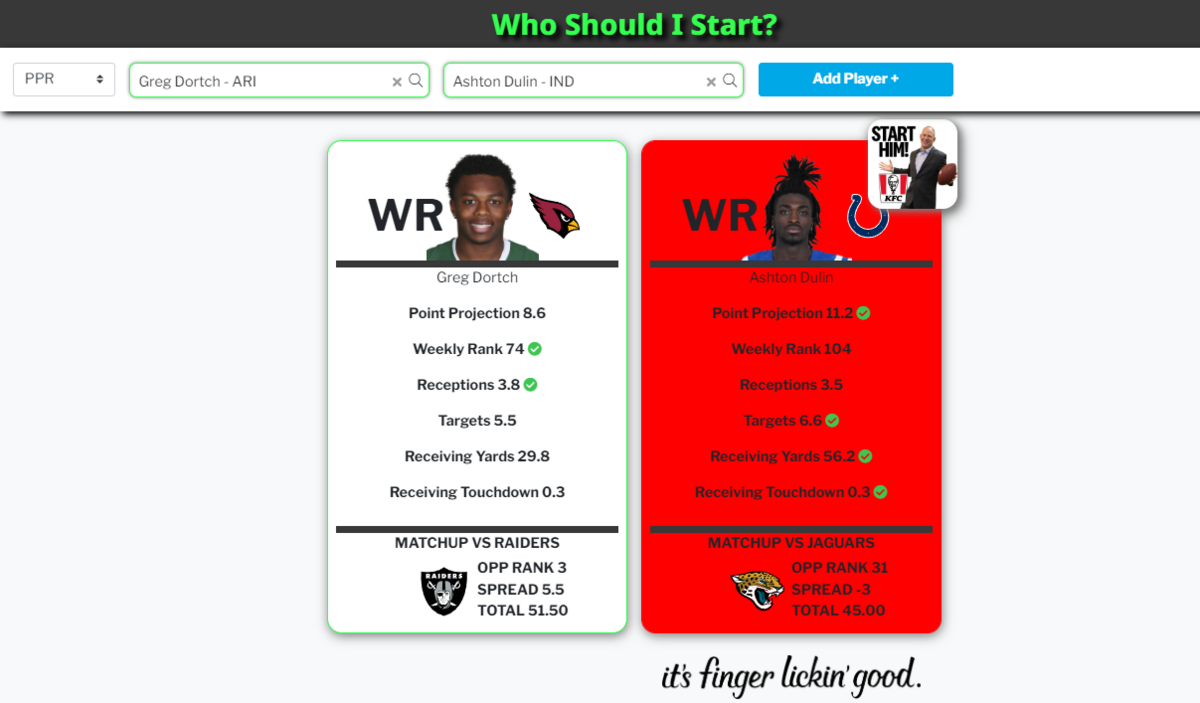 Read on for everyone who is and isn't expected to play today...

Apparently, the rib injury from last week was a bigger deal than we initially thought because Alvin Kamara will not play today vs. the Bucs. Ingram will get the start, but he's barely practiced all week with an ankle injury. You're not going to like to hear this, and I really don't want to say it, but...Taysom Hill will likely have an expanded role today.

Pittman, who has been dealing with a quad injury all week, was downgraded to Out yesterday. Adding insult to injury, rookie WR Alex Pierce (concussion) has also been ruled out. It's a massive blow for the Colts (and fantasy managers). Expect to see a big target boost for Parris Campbell, Ashton Dulin, and RB Nyheim Hines. It's hard to get excited about starting any non-Jonathan Taylor Colt, but Campbell ($3700) and Dulin ($3200) are very interesting DFS punt plays. 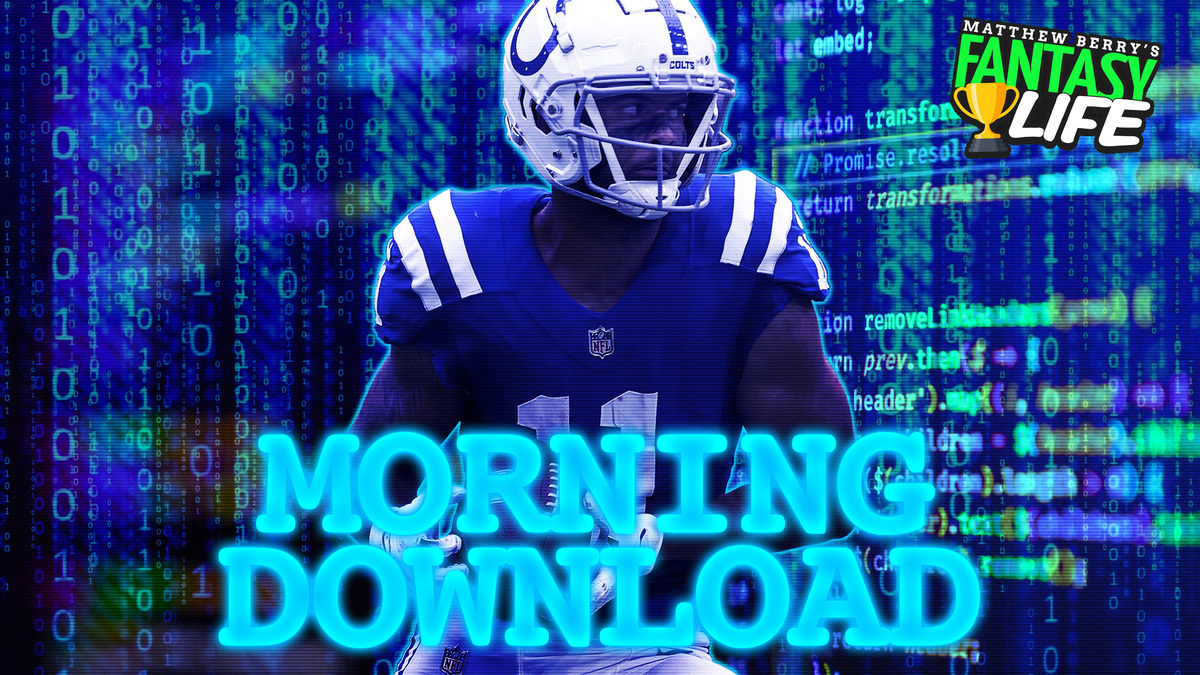 Most of the Bucs skill position players had Questionable tags all week, but it sounds like Leonard Fournette (hamstring), Mike Evans (calf), and Russell Gage (hamstring) are good to go, while Julio Jones is a true game-time decision due to his knee injury. He'll be testing things out in warmups, so make sure you check on Inactives before lock with all of these guys.

Despite the Patriots placing pass-catching specialist Ty Montgomery on IR earlier this week, the team did not elevate any other RBs from the practice squad for today's matchup vs. the Steelers. This means two things: 1) we're going to get a peek of the rookie Pierre Strong and 2) both Rhamondre Stevenson and Damien Harris are going to have big roles. If Stevenson inherits all the available pass work—a decent bet—it'll be a full blastoff scenario.

We had conflicting reports on Kittle overnight. Schefter reported that he is not expected to play for the second week in a row with his groin injury, while RapSheet said there's a chance he goes as a game-time decision. Regardless, I'd have backup plans ready.

Despite positive practice indicators earlier in the week, it sounds like the Ravens want to proceed with caution with Dobbins. This is shaping up to be a game-time decision.

The Bills WR popped up on yesterday's injury report with a new ankle injury after a limited practice. This is a tough situation to decode, and it's especially complicated by the fact that the Bills play on Monday. My preferred way to handle this would be to leave Davis in your lineup but have a backup plan in place. There are more bailout options than usual with the MNF doubleheader, so make sure you have another Bill, Titan, Viking, or Eagle in tow.

It's as simple as three easy steps.

Get the BetMGM Sportsbook App on IOS or Android

IF ANY TEAM SCORES A TD, YOU'LL RECEIVE $200 IN FREE BETS

Sign Up for BetMGM &amp; Claim This Epic Offer 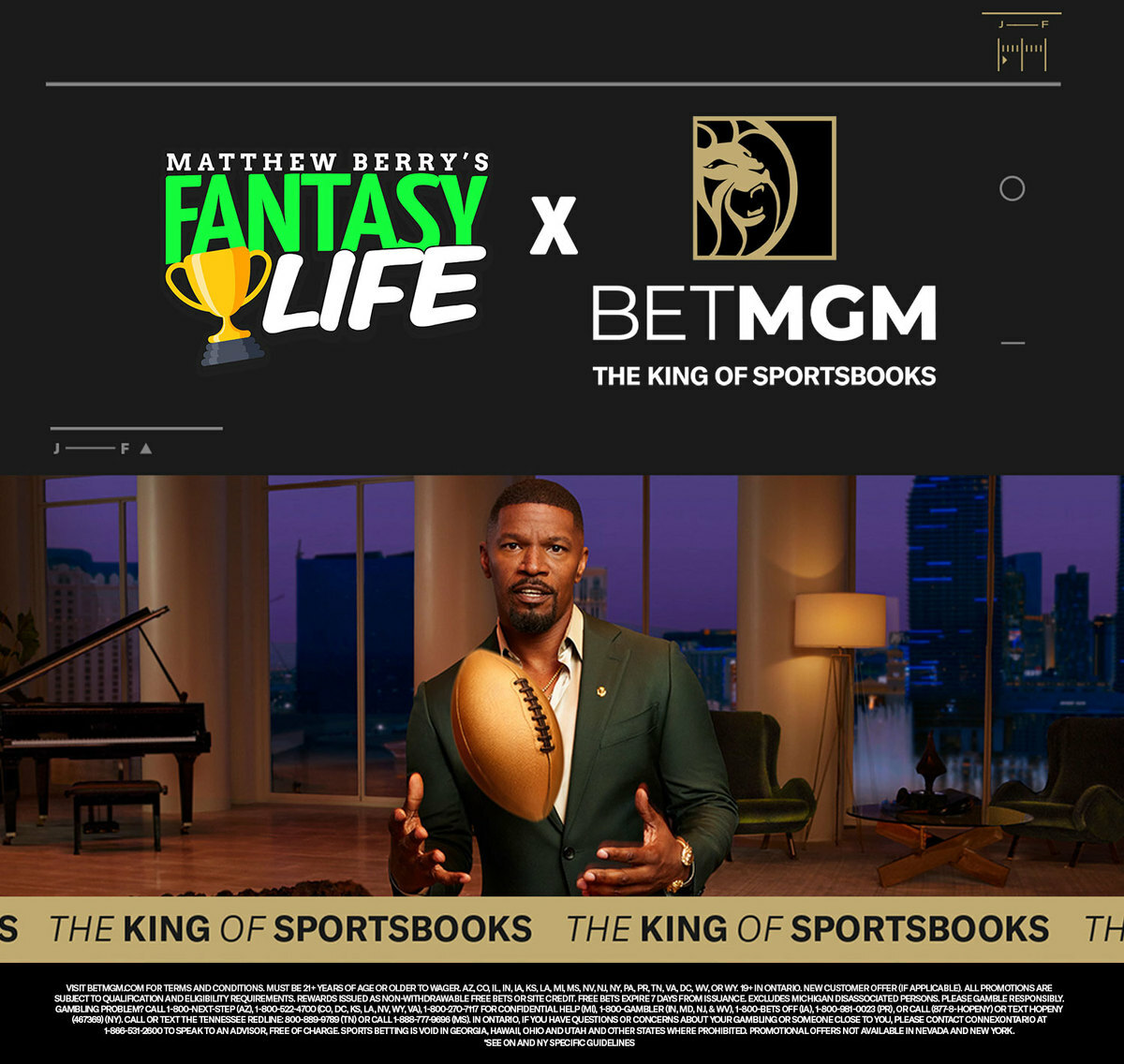 FreeBets are credits which allow participants to place another bet with BetMGM Sports; such credits cannot be withdrawn or cashed-out by participants, are forfeited when used to place a bet, and are subject to loss if the bet(s) placed with such credits do not win. FreeBets must be used within 7 days of them being credited to your account. FreeBets do not count towards qualifying for any other promotional offers, unless otherwise specifically stated in the terms & conditions of such promotional offer.

📵 The WR who deleted social media off his phone. But not for the reason you'd expect.

💰 The low-owned value play that you NEED in DFS. One Week Season has the insight.

🤪 Does Tom Brady smoke weed? You be the judge.

🍒 Hope your kids don't watch college football. This would be tough to explain.

🍮 Jim Irsay seems like a good time. Nice of him to save some desserts for Jonathan Taylor.

When playing DFS we want to correlate our lineups because it means we have to get fewer things right. Tournaments have such top-heavy payout structures that when you are right, you want to be right in a big way. That’s where stacking comes into play. Today, Eliot shares his favorite game to stack...

While the masses flock to the Raiders vs Cardinals game this weekend, a strong pivot is a potential shootout in Detriot. While neither of these teams are sexy on the surface, a game like this between two bad teams and two bad defenses has massive fantasy upside.

In Washington, we saw the offense take huge strides with Carson Wentz, as he threw the ball on 72% of plays in week one.

We're all so hard on Carson Wentz that we forgot just how much of an upgrade he is over Tyler Heinicke. Wentz finished as QB3 in week one and is in a strong position for a repeat performance as the Lions were the 27th DVOA pass defense in 2021. 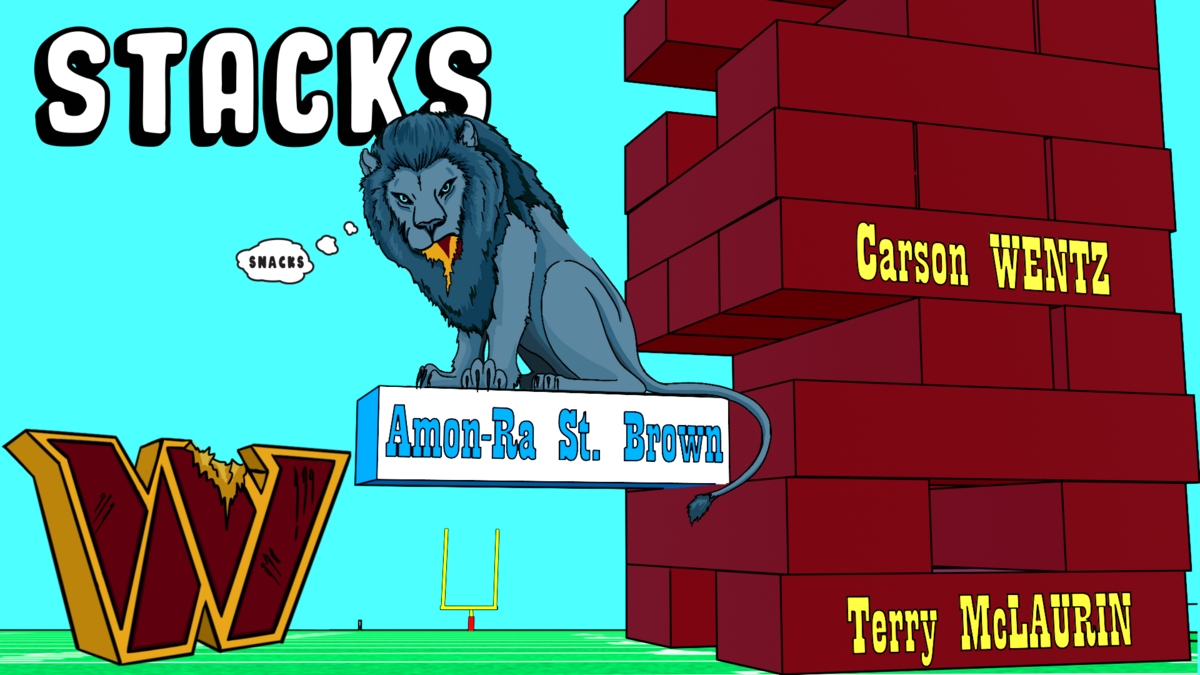 In a game environment like this, all of Washington’s skill players are in play, but with Terry McLaurin being the lowest projected rostered player according to Run The Sims, he is my favorite target.

Last season the Lions allowed the most deep receiving yards in all of football, and Week 1 was no different, as they got torched by A.J. Brown for 155 yards.

Last season, McLaurin led Washington in deep targets, and despite his 9.8% target share, he still saw 26% of the team's air yards in week one with an 18-yard aDot.

Amon-Ra St. Brown is the perfect player to run back a Washington stack as he continues to dominate. St. Brown is one of fantasy's top receivers with nine straight games of double-digit targets, finishing as a top-12 WR in seven of his last eight games.

St. Brown will operate predominantly out of the slot, where Washington just gave up 117 slot yards to Christian Kirk, the most in Week 1.

Today is a day filled with big spreads and SNF is no different, with the Packers hosting the Bears as -9.5 to -10 point home favorites. The Bears are surely excited to play in non-monsoon conditions, though Vegas still isn't expecting many points to be scored (41.5 o/u).

With Allen Lazard (ankle) set to return for the Packers, both these teams enter the game relatively healthy.

Here's everything we like tonight from a fantasy, DFS, and betting perspective:

Every Sunday we'll highlight two interesting matchups you should be aware of before setting your lineup. Take it away, Kevin...

Dotson blew up in a big way for fantasy managers last week, with five targets, three receptions, 40 receiving yards, and TWO touchdowns. One heck of a way to start your NFL career, right?

Admittedly, starting him in Week 1 in your typical home or managed league was tough as Dotson was likely way down your depth chart to start the season. It was on the DFS side of fantasy where managers used him as a cheaper “pay-down” option at WR.

This week, it’s our turn.

Dotson ran routes on 89% of Carson Wentz’s dropbacks last week, which is a pretty hefty number for a rookie in his first NFL start. Compare that to rookies like Garrett Wilson (56%), Drake London (81%), and Chris Olave (83%) — all of whom were drafted before Dotson this past April. 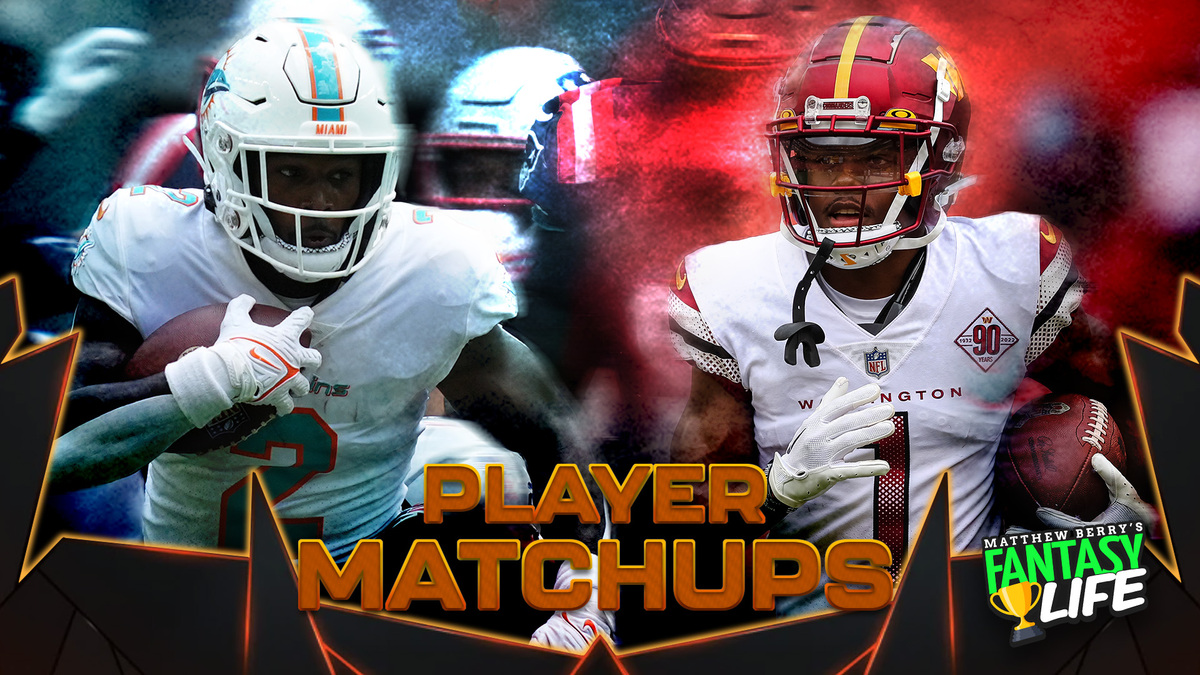 During the offseason, drafters had legitimate concerns about the Dolphins’ RB room. That ambiguity and uncertainty, and knowing that new head coach Mike McDaniel comes from the 49ers/Kyle Shanahan coaching tree and how they typically mix and match multiple RBs into their scheme pushed Edmonds down in fantasy drafts.

However, those concerns have been primarily lifted thanks to a Week 1 where Edmonds received 70% of the RB carries and four targets (12% target share) while running routes on almost 60% of dropbacks from Tua Tagovailoa.

Chase Edmonds came up small in the box score on Week 1, but his utilization was very encouraging.

The Ravens loom in Week 2, but they just gave up a metric ton of passing volume to Jets RBs Breece Hall and Michael Carter in Week 1. Both Hall and Carter earned nine targets each — roughly 32% of the 57 total targets for the Jets. Edmonds wasn’t the most productive RB in Week 1 with just 65 total yards, but he still scored double-digit fantasy points. Edmonds is a back I wish I had drafted more of, but if you did, make sure he’s in your lineup this Sunday as a potential top-12 play.