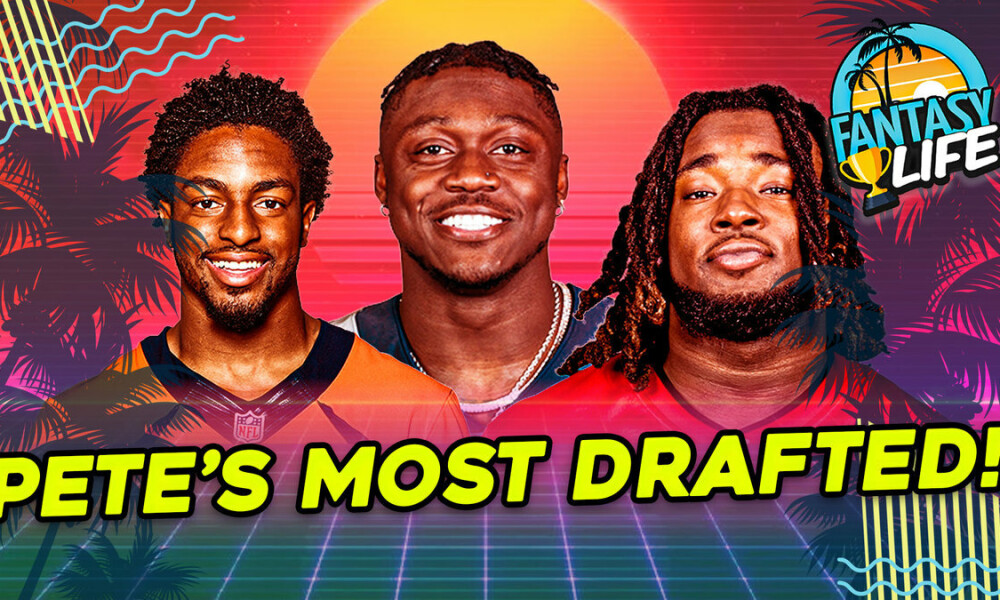 These backs are too cheap...

There is nothing that triggers people more than the "Zero RB" strategy.

Year after year, even the mere mention of the structural draft strategy can send internet commenters into a fit. Seriously, go read some of the replies here:

Come join the dark side 😂

I've already spent way too much of my time on this earth wondering why people have such strong, emotional reactions to it, but I will point out that the strategy doesn't mean you literally take zero RBs. It just means you use your early round selections on pass catchers with higher floor/ceiling combinations and less injury risk.

We have an in-depth article on Zero RB on the Fantasy Life site if you'd like to dig into why it's such a successful strategy and in today's edition we're also going to share a bunch late RB picks you should be targeting in drafts.

Professor Pete has now drafted 70+ teams in Underdog Fantasy’s Best Ball Mania III. Below he shares the three players he’s selected the most so far and why he can’t stop clicking on them in drafts.

If you always selected players at ADP and had a perfectly random distribution of draft slots, you’d have around 8% of every player (1/12).

Here are three players who have emerged as “my guys” while drafting this summer: 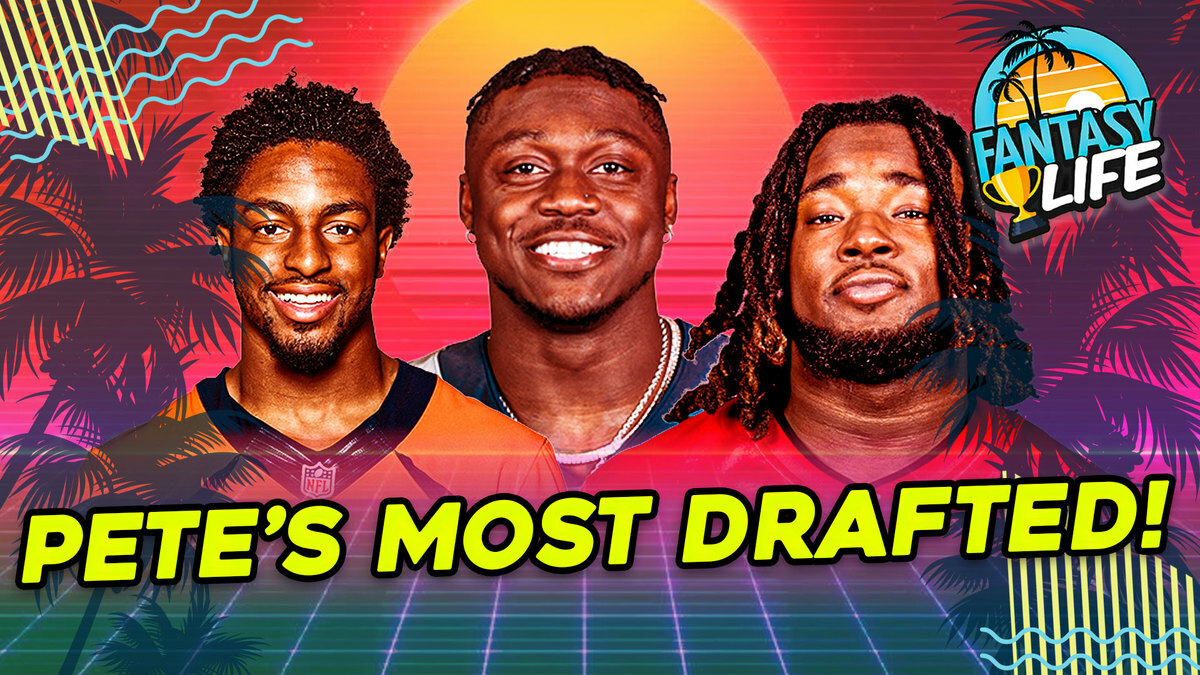 Let’s start with the case against Hamler–he could be the WR4 on the Broncos and not see the field in a lot of sets. That’s fair, but the reason I love Hamler late in drafts is because he has so many “outs”–to borrow a poker term–to return value on his cheap cost.

He could deliver a massive spike week late in the season when it matters the most like he did in Week 14 of his rookie year (86 yards and 2 TDs). With 4.27 40 speed, Hamler has the quintessential “better in best ball” profile for getting loose deep.

He could benefit from an injury to any of the other Broncos pass catchers and became an every-down player in an offense led by the uber-efficient Russell Wilson.

Or he could simply climb the depth chart based on his play and become Wilson’s new Tyler Lockett. We’ve seen Wilson support production from players less talented than Hamler over the years (think David Moore) and there does appear to already be a legit QB/WR connection here.

RoJo has had a rocky career since the Bucs selected him in the 2nd round of the 2018 NFL Draft. Still only 24, Jones finally got the change of scenery he desperately needed after signing with the Chiefs in FA.

Jones is an explosive, run to daylight runner who should have plenty of chances for both big plays and goal line carries in the Chiefs dynamic offense. With Jones you’re getting a big discount because of CEH’s presence, but we know he’s more of a speedbump than a roadblock.

We essentially devoted an entire edition of the newsletter last week to a Brown love letter, so I’ll keep this short.

Brown leads a cohort of elite WRs I’m scooping up in the 2nd and 3rd round of drafts (Deebo Samuel, Tee Higgins) where I think they offer a much higher floor/ceiling combination than the RBs going in the same range.

I have zero questions about Brown’s talent and I believe he’s getting a situation upgrade in Philly.

Come get your guys on Underdog with me. Fantasy Life readers get up to a $100 deposit match with promo code LIFE:

Pete drafts BBM3 teams on his YouTube channel every Monday morning, if you’d like to come watch him draft Hamler, RoJo, and and Brown for the millionth time.

🏁 Who wins in a race between Ja'Marr Chase & D'Andre Swift? I didn't include Leonard Fournette in this convo, but can you blame me?

🤏 The RB who is too cheap. Everyone is scared about Shanahan shenanigans (Shanahanigans?), but maybe we should consider that water under the bridge?

🚑 An update on the injured Ravens backs. Coach Jim Harbaugh gives us some hints on J.K. Dobbins and Gus Edwards.

🍜 The RB set for a bigger role in 2022. Some buzz building in New England. Scroll down for some more hype on the Patriots RB, as well.

Our friends over at Fantasy Points have put together full positional tiers to help you in your best ball drafts. Today Graham Barfield shares some of his favorite late round running back targets with us. Take it away, Graham...

This entire Tier 9 is your main Zero RB / Superhero RB target list. I’ve identified these eight running backs as my favorites in late rounds for their bellcow upside if the starter in front of them misses significant time. 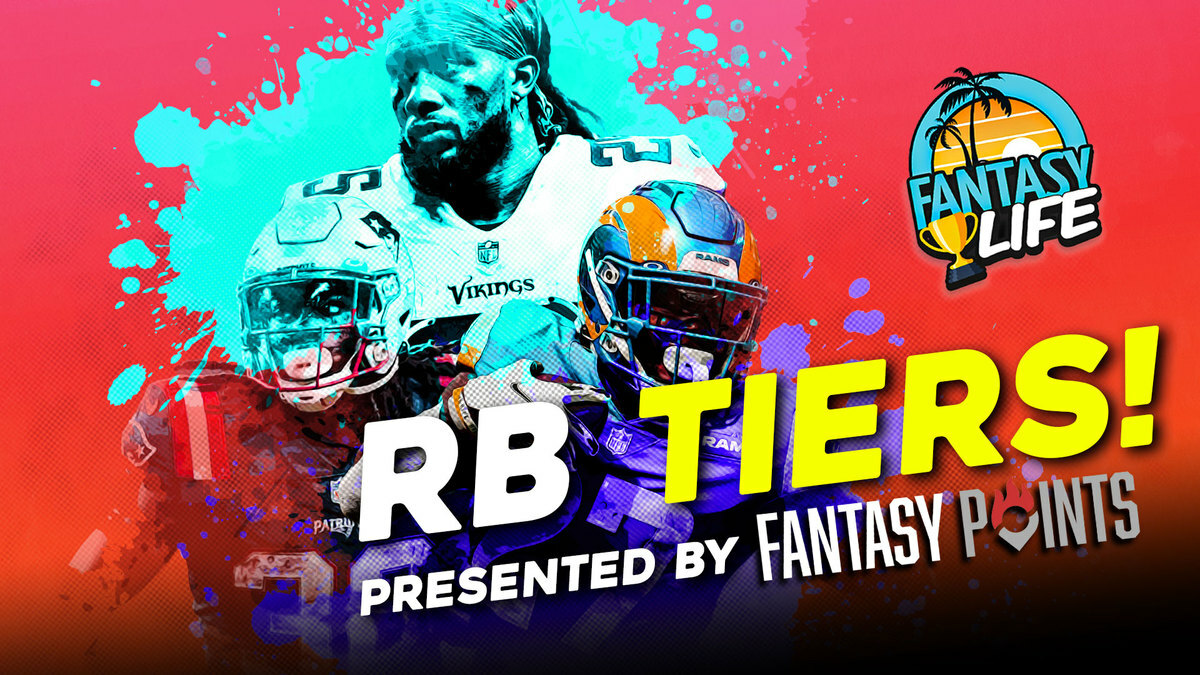 I’ve got all of these backs at least even with the market with Mattison and Stevenson ranked basically right at ADP on my overall big board. I have taken some big stands on…

Henderson makes sense as a part of any team build, handcuffed to Cam Akers or not. Before getting hurt in Week 12, Henderson was averaging 16.9 touches per game and was the RB14 by fantasy points per game (15.7).

Carter got his job taken by Breece Hall, but has obvious bell-cow upside if Hall misses time. Carter averaged 18.7 fantasy points per game in the four contests where he played at least 55% of the snaps as a rookie.

Gainwell is my preferred Eagles runner to target. Our guy Greg Cosell told us that Gainwell has bulked up to 215lbs after playing at 200lbs as a rookie, largely because the Eagles want him in a bigger role. Gainwell also has a small receiving role in his back pocket, too. In their 12 games played together last year, Gainwell out-targeted Miles Sanders 40 to 32. Gainwell’s efficiency was also much better, as he averaged 1.79 receiving yards gained per route run while Sanders was way down at 0.75.

Williams immediately jumped into this tier after signing with Arizona. His only competition as the #2 runner behind James Conner is sixth rounder Keaontay Ingram, who Yards Created liked a little. He’s still just a sixth rounder, though. Williams averaged 17.5 fantasy points per game in his seven starts last year in KC.

Herbert’s only competition behind him on the depth chart are Darrynton Evans and their sixth rounder from Baylor, Trestan Ebner. I get that GM Ryan Poles and this current regime didn’t draft Herbert, but he is the overwhelming favorite to backup David Montgomery here. Herbert rushed for 78/344/1 (4.41 YPC; 86 yards per game) in four spot starts when Montgomery missed time with a knee injury last year.

In this series, our contributors will disclose their favorite players and tell us why they can't stop drafting them. Today, we have Jonathan Fuller disclosing his love for Patriots RB Rhamondre Stevenson...

Why: What if I told you there is an RB who can provide your fantasy team with weekly flex production while also offering massive contingent upside?

Now, what if I told you that RB ranked in the top-10 for missed tackles forced per carry as well as PFF’s elusive rating last season? Finally, this mystery RB also had the same number of explosive runs as Derrick Henry on 86 fewer carries last year. Can you guess who… oh wait we put his name up above. That’s right, I’m talking about Rhamondre Stevenson.

Not only did Stevenson have a great season by a number of metrics, he did so as a rookie on the Patriots, which is no small feat. Coming into year two, he is expected to split work with Damien Harris which could be a frustrating situation for fantasy managers and is reflected in his 10th round ADP. Although his lack of projectable volume is a worry for some, I believe his upside in the event of a Harris injury justifies a pick at his current cost. But better yet, I think he will still be a usable piece for your team even with Harris healthy. 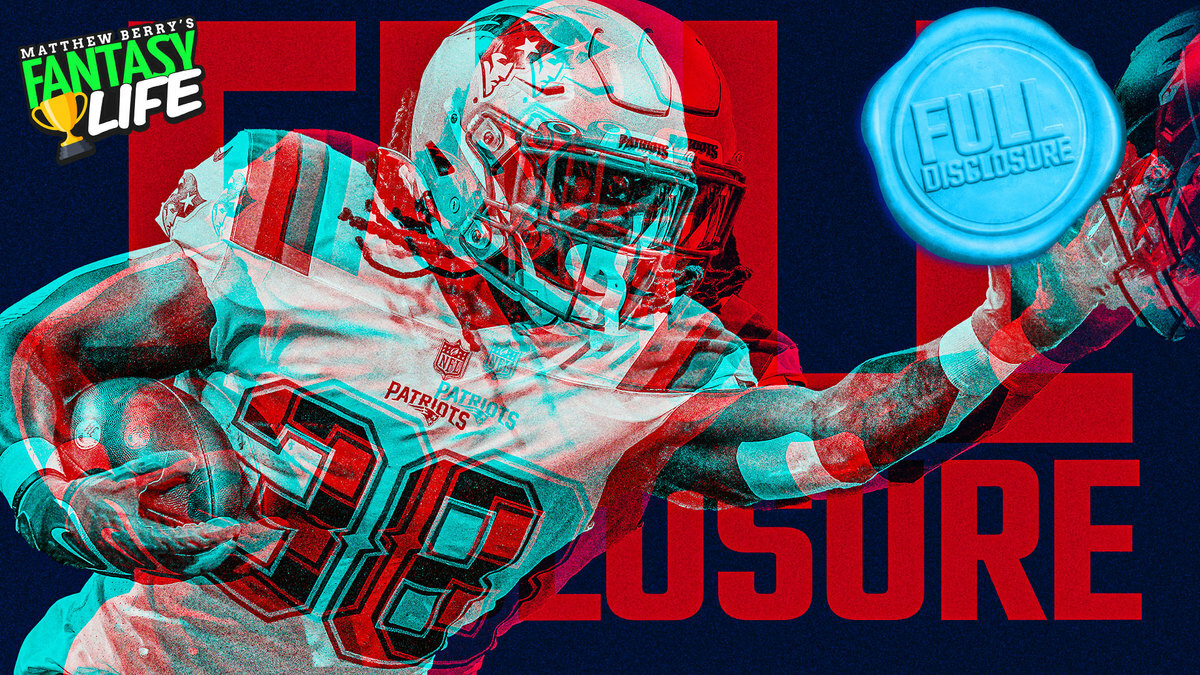 From weeks 9-17 of last season there were 6 games in which Harris and Stevenson were both active, and in those games Rhamondre averaged 13.6 touches. With his penchant for explosive plays this should make him a nice flex option in many matchups. Considering that James White is still recovering from a serious injury and is a PUP candidate for the start of the season there is also reason to believe Stevenson’s role in the passing game could grow, which only raises his floor and ceiling. Add in the fact that Damien Harris is in the last year of his deal (and unlikely to extended) and all signs point to Stevenson emerging as the key member of this backfield during the 2022 season.

Admittedly, Stevenson is a slightly better pick in best ball formats where we don’t have to predict his big games, but I will still be drafting him plenty in traditional leagues because he has truly elite upside if Harris misses time while also offering enough of a floor to be a weekly flex option.

Disclosures: Jonathan actually wasn’t a big fan of Stevenson coming out of college but he has seen the light and is drafting to make up for lost time by making him one of his most rostered players on Underdog.

The season is fast approaching, which means it is time for us to get to know all of these NFL teams and who we should be drafting and fading after a busy offseason. In today's team preview, Linda previews the Denver Broncos.

It’s been a tough run lately for the Denver Broncos, who haven’t had a winning season since 2016-17. But with Russell Wilson in the fold, things look to be trending in a better direction. The team's win total is set at 10.5 games and they have the third best odds (+260) to win the daunting AFC West. 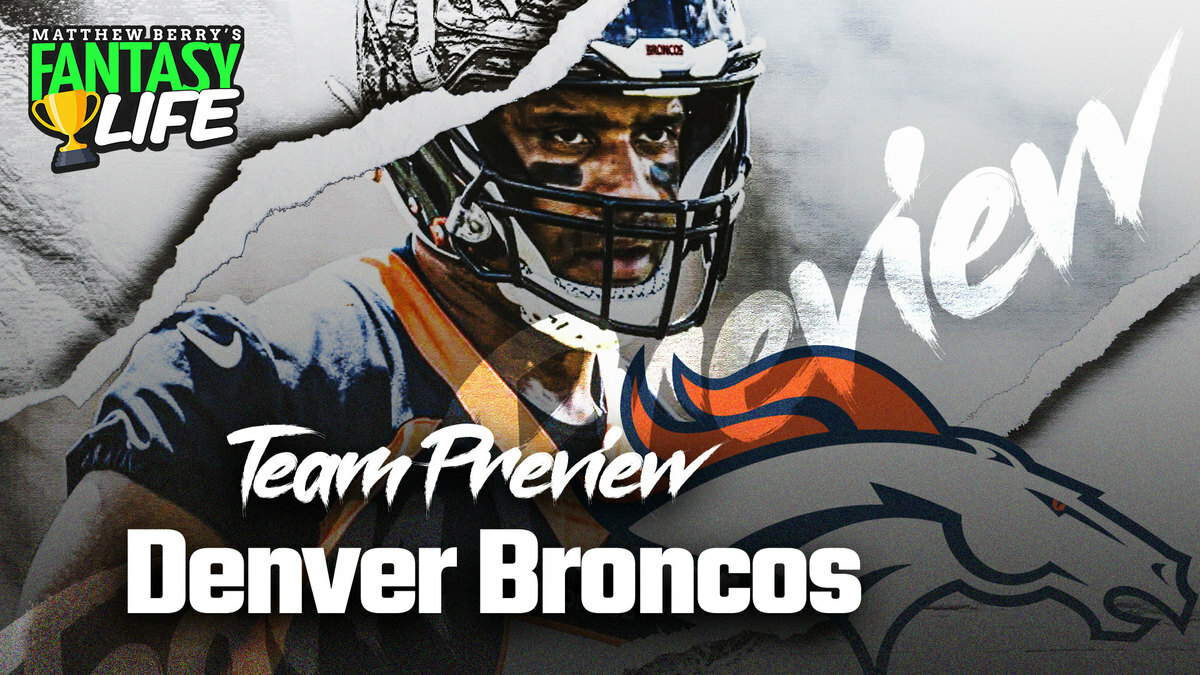 When you go from Drew Lock to Russell Wilson, the vibes are going to be immaculate. In Russell's 10 NFL seasons as the Seahawks QB, he’s only been a part of one losing season. Since the offseason started, Wilson has taken it upon himself to hold extra playbook meetings and on-field throwing sessions.

Denver’s offense has the potential to be incredibly fun this year if they let Russ cook. The team has all of the ingredients for lots of scoring--a rock solid RB tandem in Gordon and sophomore Javonte Williams, a receiving corps considered Top 10 in the league, and an offensive-minded HC.

Also, if streaming D/ST is the kind of thing you’re into (hey, people are into weird stuff, idk), the Broncos get two good games to start the season against the Seahawks Week 1 and then the Texans the following week.