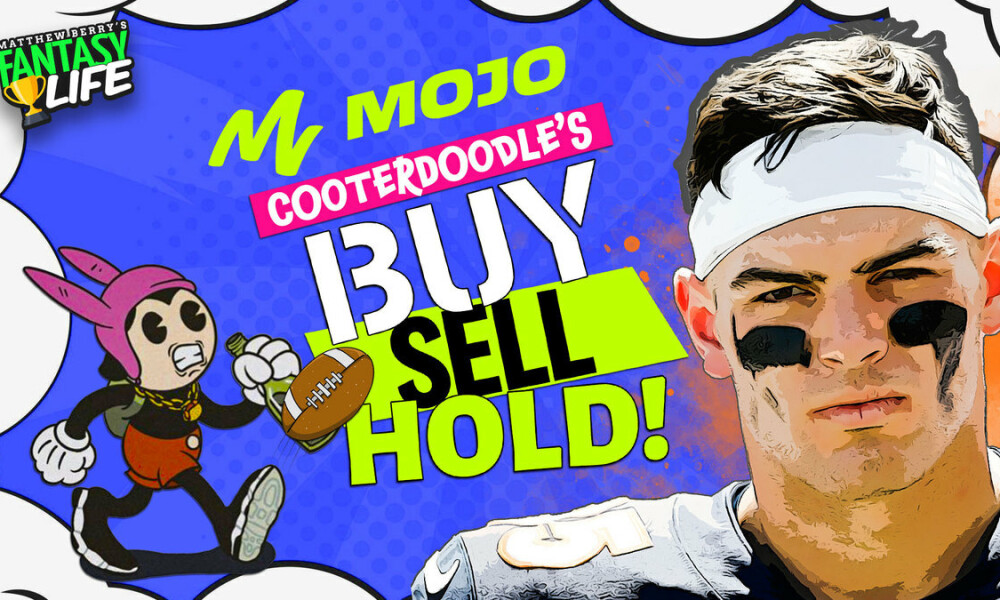 🤿 5 Players To Add On Waivers

It's time to spend that FAAB...

Last week on Tuesday, we covered the wild trajectory of the Indianapolis Colts after they fired Frank Reich and hired ESPN analyst Jeff Saturday to coach.

Now a week later, we have another dysfunctional team, the Arizona Cardinals, stealing headlines for all the wrong reasons.

In a truly bizarre move, the team released Benjamin yesterday after James Conner returned to the field and dominated snaps. Benjamin had been serving as the lead back while Conner was out and had performed well in his absence.

The closest we've gotten to an explanation, though it still doesn't make much sense, is that Benjamin lost his cool when he learned Conner would be re-installed as the lead back:

From Kyle Odegard on Eno Benjamin's release:
"The decision was made because of Benjamin’s vocal displeasure with a diminishing role in the offense"

The release leaves James Conner and rookie Keontay Ingram (who should be added everywhere as "the guy behind the guy" btw) as the only two backs on the active roster. The team could call up one of Corey Clement or Ty'Son Williams from the practice squad, or roll with just two backs similar to what the Cowboys have been doing.

It will be interesting to see if a team, dare I say the Kansas City Chiefs, would give Benjamin a look.

🚑 Zach Ertz out for the season (add: Trey McBride)

Around the same time we learned about Benjamin's release, the team also announced that TE Zach Ertz suffered a season-ending knee injury. Ertz was the current TE3 on the year in PPR leagues and had been providing fantasy managers with something incredibly rare at the position, consistent production.

WR Rondale Moore will continue his breakout in Ertz's absence, but keep an eye on the rookie TE Trey McBride as well. McBride was the first TE off the board in the 2022 draft and will certainly see his role grow down the stretch:

Targets weren't there yet, but that could change for the second-round pick.

Read on for three more players to scoop up on the waiver wire...

💪 Every point matters in fantasy and with your credit score 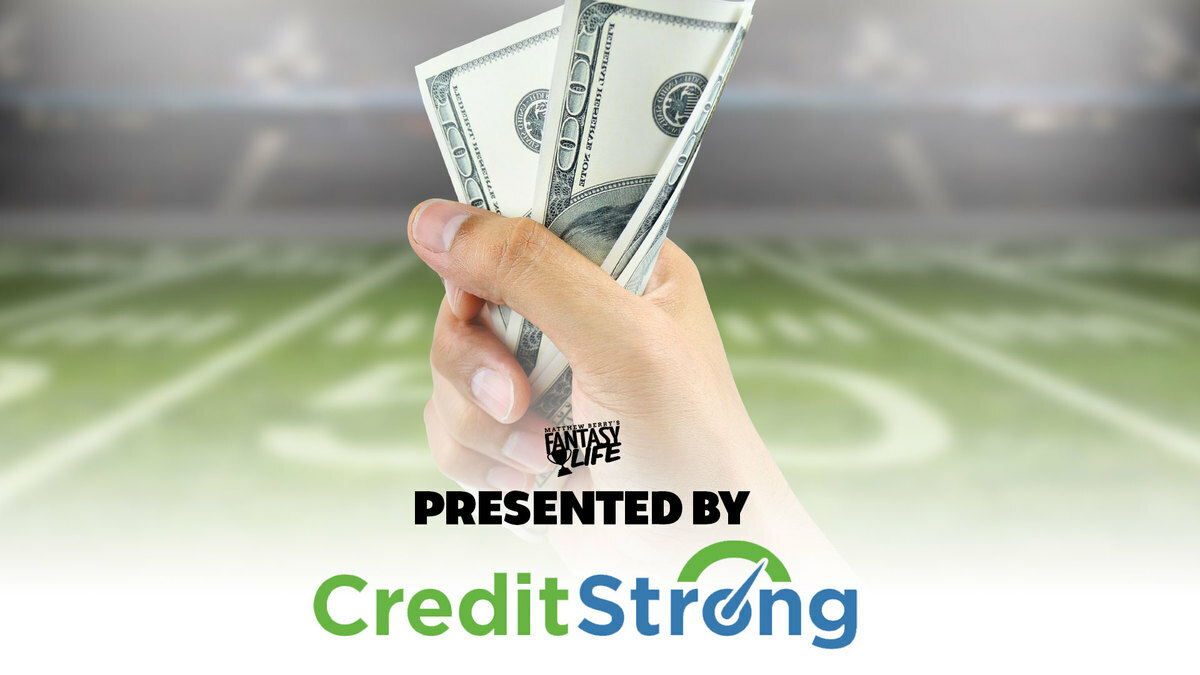 In fantasy football, the margins are thin. One missed deep shot (we're looking at you, Marcus Mariota & Kyle Pitts) and you lose a close matchup.

The same goes for your credit score, where every point matters.

A good credit score can help you access credit cards, car loans, home loans, apartment leases, and more. It can even save you money on insurance and utilities. But building your profile can take time so get started today and ensure your credit is there when you need it.

There's no credit check to get started and no minimum score required.

CreditStrong products impact 90% of the factors used to calculate your credit score, and our flexible plans let you get started for as little as $15.

As a bonus, you can even build savings as you build credit:

CreditStrong makes sure win the close matchups, so you can rack up those wins both on and off the fantasy gridiron.

Each week during the season, Cooterdoodle walks us through the fantasy trade market from a buy, hold, sell perspective...

Want to buy, sell, and hold REAL athlete stocks? Mojo is the all-new sports stock market that lets you invest in NFL and college athletes and turn your sports knowledge into real money. Trade instantly, anytime, all year long. You can even SHORT an overrated player's stock and profit when the share price goes down. Mojo is fully licensed & regulated.

Forget lions and tigers, it’s the Bears' offense that’s got me yelling! Chicago has found new life these last few weeks, and a star is born. Fantasy analysts have been waiting for Cole Kmet to be unlocked all season long, and it's finally coming to fruition with 5 TDs in his last three games. (Editors Note: We know one of those fantasy analysts)

Mr. @ColeKmet I just want you to know we have a fan club that roots for you daily. The CKC is Kmet’ed and if you ever need a pick me up, we got you!

The tight end position is brutally unpredictable this year(read: every year), but it’s looking like Kmet is worth the bet now that Justin Fields is unleashed.

While I’ve enjoyed watching Tyler Boyd logging some extra receptions in Chase’s absence, it won’t last forever. Ja’Marr is scheduled to return very soon. Before his injury, Chase put up two back to back games with 130 yards and two TDs.

Remember when I told you to grab DeAndre Hopkins before his return? This is the same idea. If you’ve got a winning record, you have the freedom to think long term and build yourself a strong playoff team.

If you can hold Chase on your bench in the event he doesn’t return in Week 11, make the move. We know what he can do when he’s on the field, and the Bengals offense has a knack for getting hot in the red zone later in the season. 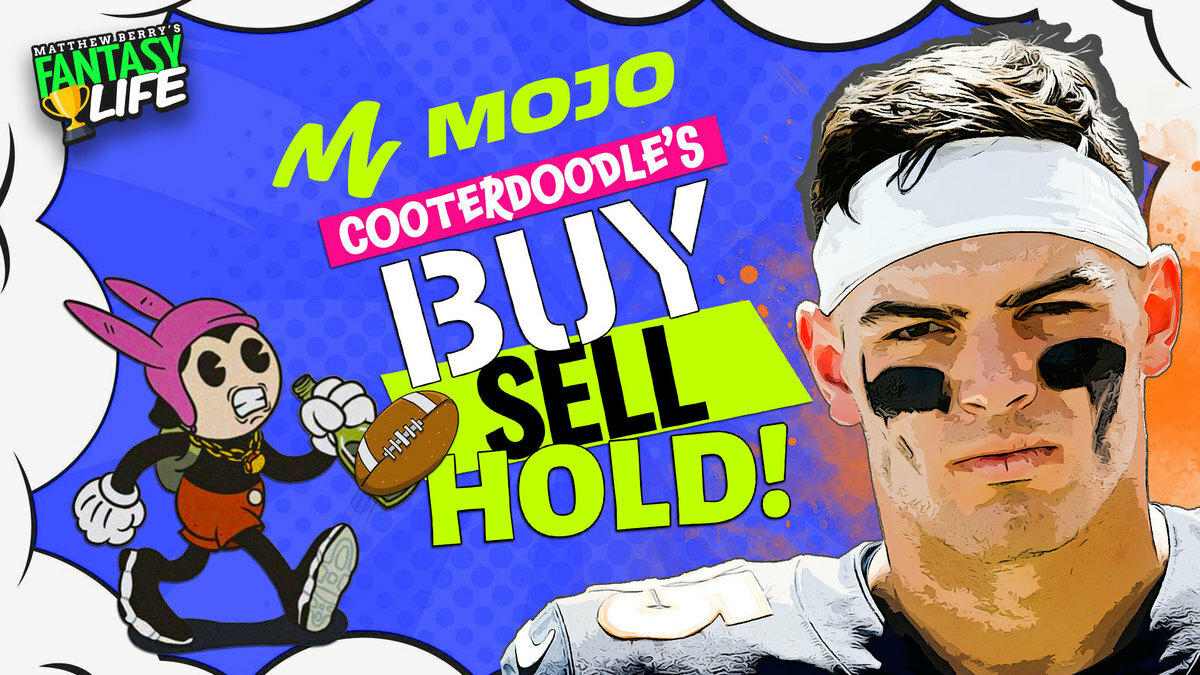 Wow. Watson looked great in Week 10, putting up 107 yards and 3 TDs. But do you remember when it was Romeo Doubs' week?

The question is: Do you trust Aaron Rodgers to keep throwing the ball Watson’s way with Allen Lazard and Aaron Jones in the mix? Personally, I don’t. This isn’t to say Watson isn’t a stash if you need a player and can grab him on waivers (we recommend doing just that below).

However, if Watson continues to see work, 3 TDs on 4 receptions is a tough shoe to fill. I’m looking to sell high in the hopes of upgrading towards a more consistent player as we enter trade deadlines.

📉 Uh oh, this is bad news for the best asset in fantasy. Hmm.

📣 Jim Irsay goes off on the haters. "Just lose, baby" should be the actual motto.

💸 The Las Vegas Raiders are down bad. Truth in comedy is what they say.

🥵 This RB is about to take over. Grab him on waivers NOW.

Waivers are a crucial component of fantasy football, and nabbing the next league winner ahead of your leaguemates can help you edge out that title. Each Tuesday, Sam Wallace will highlight players to target in your redraft leagues. 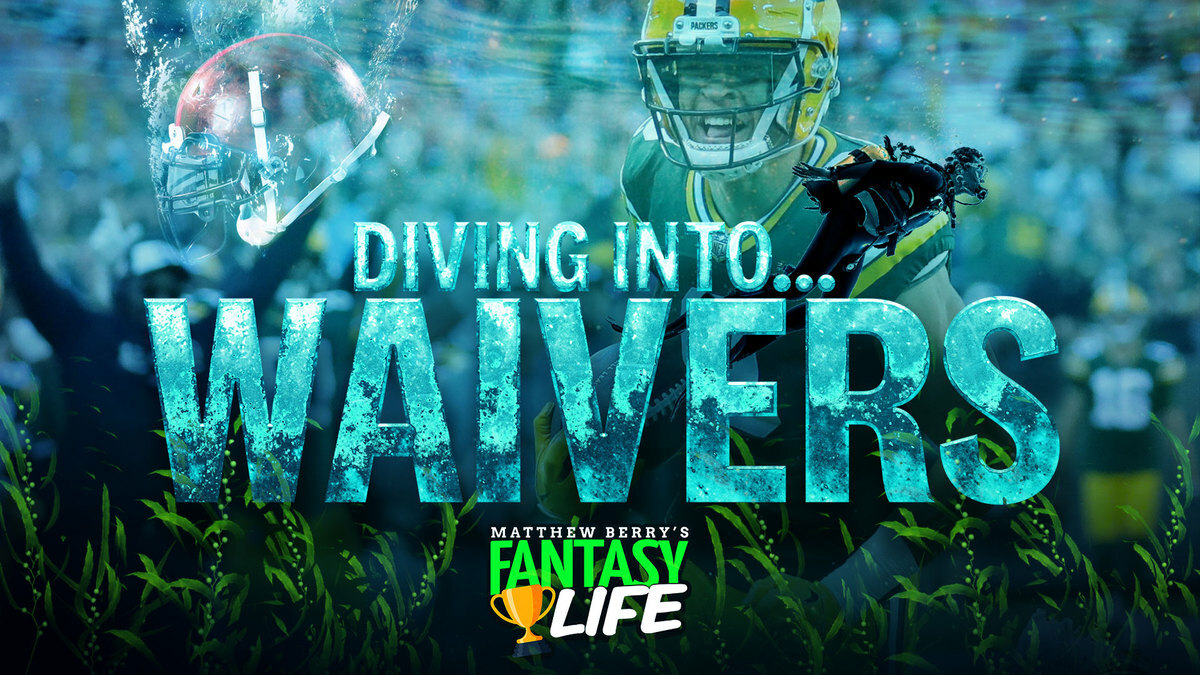 The breakout games were aplenty on Sunday as rookie WR Christian Watson torched the Cowboys with a line of 4 / 107 / 3 on eight targets. Those were career-best marks across the board, as QB Aaron Rodgers might have finally found a reliable weapon on offense. Watson, an early second-round draft pick, has all the physical attributes you want in a wideout. His role (and Rodgers’ trust) should continue to grow in the weeks ahead.

Speaking of breakout games, rookie RB Rachaad White might have taken the lead in what has been a growing committee with incumbent veteran RB Leonard Fournette. White earned 22 carries (same as his previous four games combined) and totaled 105 rushing yards. 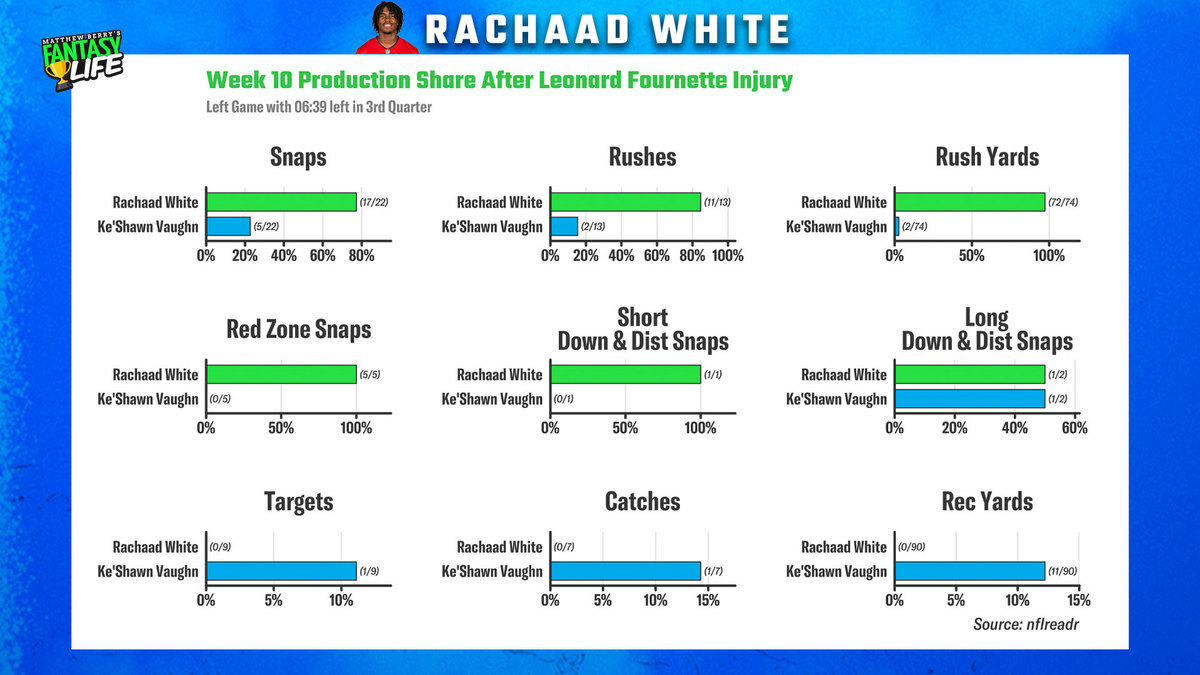 Most notably, Fournette (14 carries) left with a hip injury and did not return. The Buccaneers are on bye next week, but White needs to be added in all formats.

The breakout game for WR Kadarius Toney finally happened. Just two games into his tenure as a Chief, Toney led all receivers in targets (five), racked up 57 receiving yards and a TD, and even tallied two rushing attempts. It should be noted that this breakout came under pretty ideal circumstances for the 2nd year WR.

JuJu Smith-Schuster took a big hit in the 2nd quarter and was ruled out for the rest of the day. In addition, Mecole Hardman was ruled out prior to the game, setting the stage for Toney's big performance. 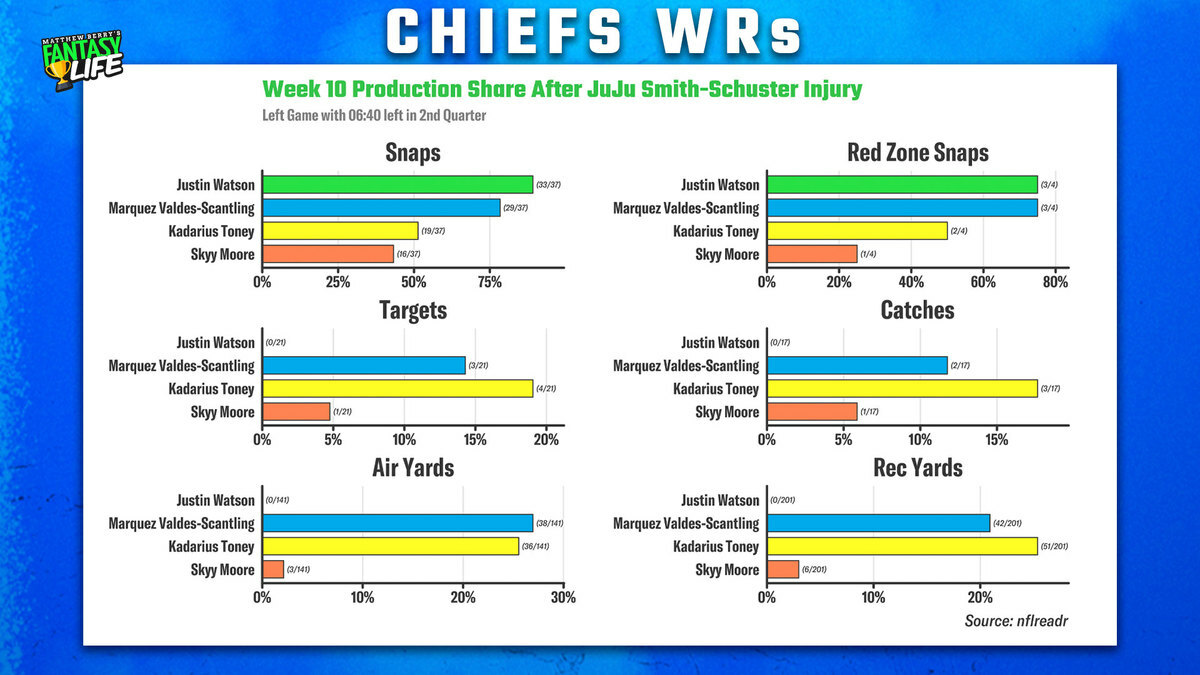 Without WR Hardman active this week, Toney filled that dual role admirably. He also jumped from nine snaps in Week 9 to 34 snaps this week (PFF). He’s a must-add in all formats, as his role should only continue to expand. 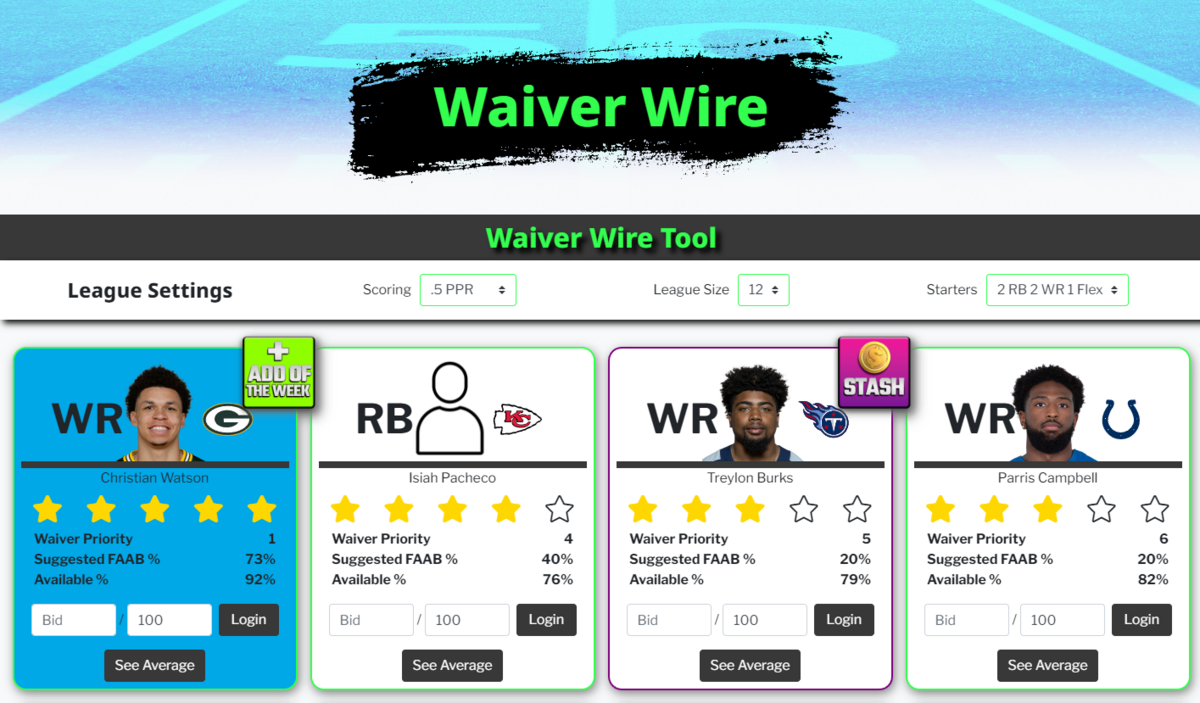 The Waiver Show is on @onamp today!

@EliotCrist and @SamanthaRHolt will be answering all your questions today at 4:00pm ET and will dive into Waiver Wire targets 🔥