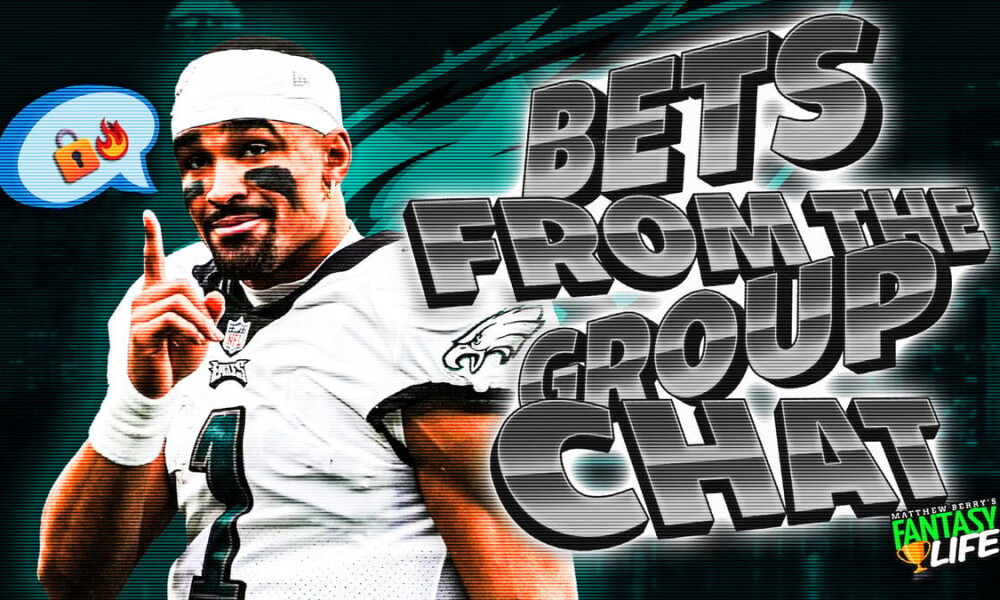 🤔 Can The Jaguars Upset The Chiefs?

For the first time since the 2004 season, all eight of the starting QBs in the Divisional Round are under 30 years of age. That postseason boasted names like Peyton Manning (28), Tom Brady (27), Ben Roethlisberger (22), Michael Vick (27) and Donovan McNabb (28).

While that is a tough list to live up to, the NFL appears to be in good hands over the next decade with Josh Allen (26), Patrick Mahomes (27), Joe Burrow (26) and Jalen Hurts (24) as the headlining acts.

In the Wild Card Round, Trevor Lawrence (23) had a forgettable start but played an amazing second half to pull off an incredible come-from-behind victory against the Chargers. This weekend the former No. 1 selection will try to knock off Mahomes in an effort to establish his place among the young elites.

That begs the question...

🤔 Can Jacksonville pull off an upset in Kansas City today?

The Chiefs defeated the Jaguars 27-17 in Week 10, with Mahomes going off for 331 yards and four TDs. This week, Vegas doesn't see things much differently with the Jaguars as nine-point underdogs.

However, the Chiefs aren't a perfect team. They might have the best player at the most important position, but the Jaguars could be peaking at the right time and have a puncher's chance to knock Kansas City out of the playoffs.

Offensively, there are three things working in Jacksonville's favor.

That is a combination of factors that could compound in favor of the Jaguars. However, they will need to do a better job of protecting Lawrence. Kansas City has the No. 8 pressure rate in the NFL (35%) and piled up five sacks in Week 10. Fortunately, Jacksonville isn't bad in this department — they rank No. 8 in pressure rate allowed at 24%.

They must avoid falling behind by a large margin early. In Week 10, they trailed by four-plus points on 86% of snaps which led to their most predictable game of the season, dropping back to pass on a season-high 80% of plays.

On the defensive side of the ball, the Jaguars must get to Mahomes. They have the No. 3 pressure rate (37%) in the NFL but registered their second-worst PFF pass-rush grade of the year against Kansas City.

Mahomes is one of the best QBs in the league against pressure, but his stats still take a significant hit when compared to his non-pressure throws. Against pressure, his yards per attempt is a manageable 6.6 yards, and his completion percentage dips to 47%.

The Jaguars have the ingredients needed to challenge the Chiefs. Now they just need to cook (i.e., do the things they have already proven they can do). That makes them much more dangerous than the nine-point spread suggests.

As punishment, you're sitting at a local diner for 24 hours unless you eat 24 waffles.

Who knew Kyle Pitts would be such a bust?!

Don't wait until next season. Your "get right week" starts right now when you sign up for BetMGM.

Nothing beats the thrill of winning, and you can't eat another waffle, so why wait?

COOK UP A WIN

FreeBets are credits which allow participants to place another bet with BetMGM Sports; such credits cannot be withdrawn or cashed-out by participants, are forfeited when used to place a bet, and are subject to loss if the bet(s) placed with such credits do not win. FreeBets must be used within 7 days of them being credited to your account. FreeBets do not count towards qualifying for any other promotional offers, unless otherwise specifically stated in the terms & conditions of such promotional offer.

Going with your gut can only get you so far. Use our industry-leading rankings to gain an edge over your league mates. Need help? Don't worry, Dwain has you covered.

Early in the week, there was some optimism that Clyde Edwards-Helaire would return for the Divisional Round. However, that didn’t come to fruition with the veteran RB remaining on IR. When Edwards-Helaire returns, he could steal some snaps in the passing game – his route participation average was 38% over the first six games.

Ronald Jones II saw his largest workload of the season in Week 18 with 38% of the rushing attempts, so there is still a chance this backfield turns into a three-way committee moving forward. However, Jones is more of a threat to Isiah Pacheco’s role as the early-down grinder.

McKinnon only saw 13% and 8% of the rushing attempts over the last two games, but his route participation remained above 40%, which is how he scores most fantasy points. He only has 290 yards and one TD on the ground but has 55 receptions for 513 yards and nine TDs via the passing game.

Without CEH in the fold, we can remain confident in McKinnon’s role in the passing game, making him a mid-range RB1 on the slate.

Toney has been a target magnet with an eye-popping average TPRR of 30%. Unfortunately, he hasn’t been able to carve out a more prominent role. In Week 18, he was in a route only 22% of pass plays despite the Chiefs being without Mecole Hardman and Skyy Moore.

Despite the route limitations, he still came through with 12.4 fantasy points thanks to a rushing TD on three carries. Starting Toney is a bet on a big play or high-leverage touches inside the 10-yard line. However, he gets a slight upgrade because Kansas City will be without Hardman again, leaving the door cracked for a surprise surge in utilization.

Toney is a boom-bust WR2, but if he ever surprises with a 60% route participation, he could be a slate-breaker.

McKenzie missed the Wild Card game due to a hamstring issue he suffered in practice. However, he practiced in full every day this week and is off of the Bills’ injury report.

The speedy slot WR hasn’t delivered consistent fantasy value this year, but he has two 21-plus point performances, making him a spike week candidate. In Week 18, he was the clear No. 3 option with a 73% route participation, and he cleared 65% in five of his last seven games.

McKenzie is a low-end WR2 on a four-game slate.

🍕 Let this RB Cook. This line is TOO Low.

💪 This rookie QB is polarizing. Wow, that is a cannon.

🤓 DFS Plays to build your core. Everything you need to know.

🤘 Not sure Arch Manning will ever need LinkedIn. Hook'em.

Our resident betting sharps at Fantasy Life have a group chat. Lucky for you, they are leaking the alpha. Here's what Jordan came up with for the Divisional Round...

I’m not sure if anyone needs this reminder, but the Eagles are really good.

Now that we have that out of the way, Jalen Hurts hasnt thrown under 31 pass attempts in the past 4 games, and had 35 attempts against this same Giants team, in a meaningless Week 18 matchup. (Via our friends at Props.Cash where you can get 25% off using promo code LIFE)

The Fantasy Life projections have Hurts projected for 35.9 attempts, and my aggregate projection set has him even higher at 36.7. This is one of my favorite bets of the week, and I will also be parlaying this with Eagles -7.5.

Over the past few weeks, Jerick McKinnon has been the major topic of discussion for this Kansas City backfield.

Everyone has been so focused on McKinnon’s efficiency and how many TDs he’s been able to score (it’s a lot). McKinnon has completely taken over the 2-minute offense, logging 100% of those snaps over the past 2 weeks, but his role in the rushing game has been more or less nonexistent, only registering 13% of attempts in Week 17 and only 8% in Week 18.

Over that same span of time, Pacheco has notched 60% of the attempts in Week 17, and 31% in Week 18. It should also be noted that in Week 18, Ronald Jones II was worked into the rotation, registering 31% of the rushing attempts. Week 18 was a meaningless game for the Chiefs, so I don’t expect that usage to continue.

The Fantasy Life projections have Pacheco set for 79.8 rushing yards, making it one of the biggest edges on our player prop tool this week.

We have a big Divisional clash on deck with the Giants and Eagles, so Fantasy Life Contributor Matt LaMarca is here to dive into the finer points of this intriguing matchup...

The theme of the playoffs so far has been rematches and divisional rivalries. We’ll get another of both in the Divisional Round as the Giants travel to Philadelphia to take on the Eagles. Philly rolled to a 48-22 victory in their first game versus the Giants this season, but they struggled to a six-point win in New York in Week 18. The Giants rested most of their key players in that contest, while Jalen Hurts played the entire game for the Eagles.

Even though that wasn’t the most impressive showing, it was an extremely important win for the Eagles. Not only did it secure the top spot in the NFC, but it was Hurts’ first game back in the lineup following a two-game absence.

Hurts emerged as a leading MVP candidate for the Eagles this season, and he was basically unstoppable in the team’s first 14 games. He averaged 248 passing yards with 22 passing touchdowns, and he added another 53.4 rushing yards per game with 13 scores on the ground. Add it all up, and Hurts ranked fourth among quarterbacks in Expected Points Added per play (EPA/play) over that stretch.

Hurts’ health is one of the big question marks heading into the playoffs. He was officially removed from the team’s injury report, but he did not look like the same player in Week 18. He managed just 5.26 adjusted yards per attempt – his worst mark of the entire season – and he added just 13 yards on the ground.

On the other side, Daniel Jones is coming off arguably the best game of his career against the Vikings in the Wild Card round. He racked up 301 passing yards and two scores, and he added another 78 rushing yards. No QB in NFL history had previously had at least 300 passing yards, 70 rushing yards, and two passing TDs in a postseason contest.

That was a significantly easier matchup than Jones will face on Saturday, but Jones made major strides in his fourth NFL season. His emergence as a legit dual-threat option at the position helped cover up a lot of holes in the Giants’ offense, with Jones averaging 44.3 rushing yards per game. He also punched in seven touchdowns over the year, which was more than he had in his previous three seasons combined.

Jones led the Giants to the best against-the-spread record in the league this season, and they moved to 14-4 following their cover versus the Vikings last week. Part of that is due to the team’s coaching staff, which has proven itself to be one of the best in football. This team has performed above its talent level all season, and Brian Daboll and Wink Martindale have been a big reason why.

Can the Giants put together another cover on Saturday? A few things are working in their favor. For starters, divisional games in the postseason have historically favored the underdog.

Underdogs have gone 16-11-1 ATS in divisional playoff matchups since 2005, and they’re 5-3 when getting at least a touchdown. We saw the Ravens and Dolphins cover as large divisional dogs last weekend, despite both teams being without their starting QB.

Add it all up, and I think the Giants have enough magic left in them for one more cover. I’m not sure if they can actually win this matchup, but they can hopefully keep it close.

If you don't think the Giants can cover, no sweat. We have you covered with other bets.

Get ALL Of Our Picks!