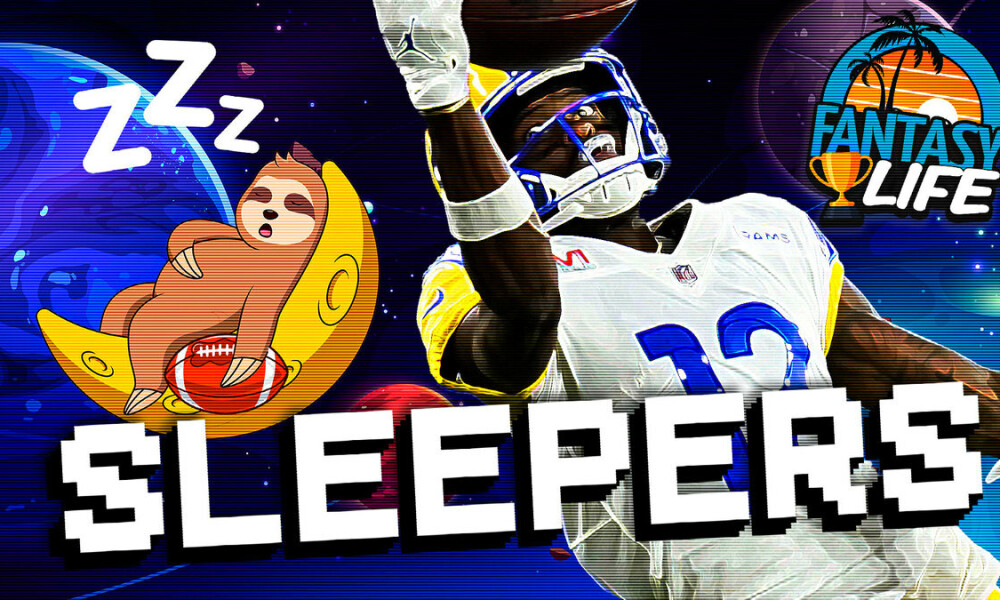 Tread carefully with these RBs...

We've entered a new era of running back committees and role-specific backs. It can be annoying for fantasy purposes, but the ambiguous backfields do lead to opportunity and hidden upside.

But that's only when it's a 2-man backfield. When you introduce a third back in the mix, it becomes a fantasy nightmare.

In scouring training camp reports over the past couple days, there are four different backfields I'm slightly concerned about as the tea leaves indicate full-blown committees on the horizon:

The recent beat reports peg McKissic as the pass-catching specialist and the rookie Robinson as a short-yardage grinder. If this is true, what is left for Gibson?

Allgeier as the power back and Patterson as the Swiss Army knife sounds great in theory, but Williams is going to be a pest. We've seen him previously flash a three-down skill set in both Kansas City and Chicago. The beats say he "should be a factor this season."

Singletary and Cook are ADP Twins--more on that below--but Moss could be a big fly in the ointment if this early camp buzz is correct. If Moss steals the goal line work here, we could be in for max pain.

On a recent NBC Sports Edge podcast, The Athletic's Mike Dugar was asked if the Seahawks will be a 2-man committee or if there would be a dedicated third down back.

His response: "Neither one of them (Walker/Penny) is better than Travis Homer or DeeJay Dallas (in pass protection)...You’ll see Travis coming in on 3rd down. Travis is one of the best pass blockers in the league."

Sorry to be a buzzkill, enjoy your weekend!

🚀 The Rhamondre hype is real. Check out his stats from recent team drills.

🥇 Who is the Patriots #1 WR? Here's the early leader in the clubhouse.

👐 What an insane catch. NFL player or pole vaulter?

🔮 What can we expect from Allen Robinson?? "Potential monster year coming."

😡 Kyler Murray is mad. Let him study in peace.

In fantasy drafts we are forced to make tough choices. In this series, our contributors will help you break ties on these ADP Twins. Today, Jonathan looks at a pair of RBs going in the mid-rounds.

We have a classic case of rookie vs incumbent brewing in the Buffalo backfield. The Bills are expected to be one of the best offenses in the NFL which means this is not a situation we can afford to ignore. So what should you do if you find yourself staring down the choice between these two RBs in the middle rounds of your drafts? Do you take the proven production? Or the unknown upside?

Over the final four weeks of the regular season Singletary compiled 396 yards from scrimmage and 6 TDs which made him the RB3 over that span. Despite the strong finish to the season, the team went out and spent a premium pick (63rd overall) on RB James Cook out of Georgia. And in case you were living off the grid during draft season, yes, he is Dalvin’s younger brother.

Singletary has done enough to earn the first crack at leading this backfield but his upside is capped. He played in 16 games last season on an elite Bills offense with less competition for touches and finished as the RB24. His current cost of RB33 on Underdog is reasonable but the path to truly elite upside is narrow, especially if he loses his role in the passing game.

Although Singletary is expected to be the lead back early in the season, the hype is already building for the rookie. What has me most intrigued is that all indications point to Cook being the pass-catching back from day 1. Don’t forget that the Bills tried to sign JD McKissic this offseason before drafting Cook, which suggests they highly value this type of skill set. Cook was extremely efficient as both a runner and receiver in college and is known for his speed, something which Singletary lacks. Adding an explosive player like Cook to this Buffalo offense sounds like a recipe for huge fantasy performances.

If you value early season production, there is a case to be made for taking Singletary. However, in most forms of fantasy football the end of the year is what really matters which is why I prefer drafting James Cook. In addition to the slight ADP discount, Cook is more likely to be the player who gains value throughout the season and should provide a higher weekly ceiling due to his role in the passing game and ability to create big plays.

In this series, our contributors will share the sleepers that they're targeting in drafts. Today, we have Geoff taking a stand on the Falcon's backfield and Ram's receiving core.

Allgeier is a player who has oodles of potential for 2022, especially as a potential playoff (Week 14 to 17) spike candidate. The Falcons drafted Allgeier in just the fifth round, but their depth chart at RB currently features two players on the wrong side of 30 and a swath of practice squad candidates. The conditions are ripe in Atlanta for a potential Allgeier takeover, and the news from this offseason is that they plan to use him initially as their primary backup to Cordarrelle Patterson – who has never started a season as a team’s primary RB.

From a talent perspective, Allgeier is intriguing as well. Of the players taken in the 2022 draft, the BYU product forced the fifth-most missed tackles (76) in college last season and developed into a true three-down back, upping his reception totals from the previous year. While his 4.6 40M time somewhat limits his big play ability, we’ve seen players with similar metrics (like Kareem Hunt and James Conner) develop into true three-down workhorses.

With Patterson averaging just 3.8 ypc the last two seasons, it’s not a stretch to say that Allgeier could slide in and steal early down work as early as Week 1. At the very least, the worst case scenario seems to be the Falcons easing in Allgeier early and then upping his usage down the stretch. Despite the great college production and perfect landing spot (from a depth chart perspective) the Fantasy Life ADP Tool still has Allgeier set with a consensus ADP of 147.38, putting him around RB45-50. That makes whenever he falls into, or past the 12th round Allgeier season for me and a player I’m super excited to keep targeting going into August. 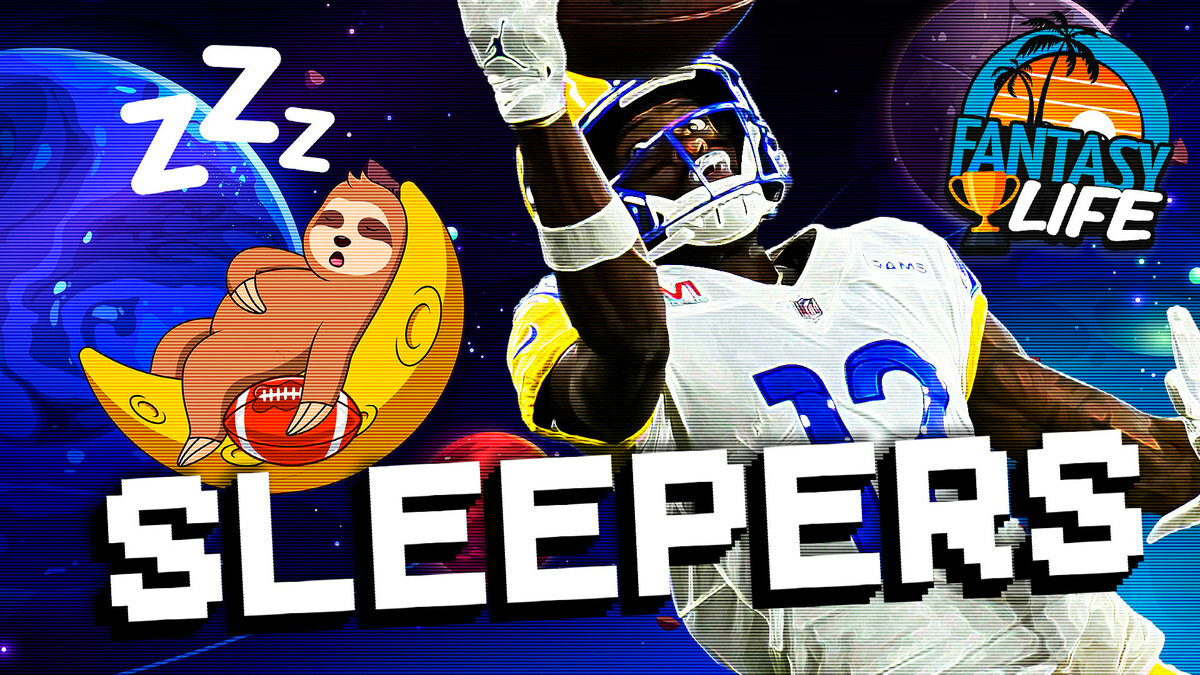 The industry has pretty much assumed that number two duties on the Rams, and all of Robert Woods’/Odell Beckham’s targets from 2021, will flow directly to Allen Robinson in 2022. This has left Van Jefferson available quite late in drafts at a current ADP of 168.2 (WR68) and firmly on the radar as a solid value. Jefferson may not be as athletically gifted as a prime Allen Robinson but he was praised as a terrific route runner coming out of college and has the edge on Robinson in both tenure and age.

From a production standpoint, Jefferson showed massive improvement with Matthew Stafford, posting 16.0 yards per reception in 2021 (vs. 11.6 ypr as a rookie). Jefferson could benefit from a usage increase in 2022, as well, and has multiple paths available to him to achieve that goal. L.A.’s desire to keep Cooper Kupp intact for a stretch run could shift Jefferson into a somewhat larger route tree and we shouldn’t discount the idea that Allen Robinson simply flops in a Kenny Golladay to the Giants type fashion. People love to point out the QB issues Robinson has dealt with but he’s not posted a yards per reception mark above 13.0 yards since 2018 and is currently going into his ninth year in the league (the tread could be wearing thin).

Regardless of your feelings on Robinson (or Jefferson for that matter) the main thing to consider with Jefferson for fantasy is that the market currently isn’t taking into account any kind of potential bump in usage for 2022. With him almost assured to see a ton of field again – and multiple paths to an increased target share – I see Jefferson as a fantastic WR to gamble with late in drafts and a player to continue to target into late August.