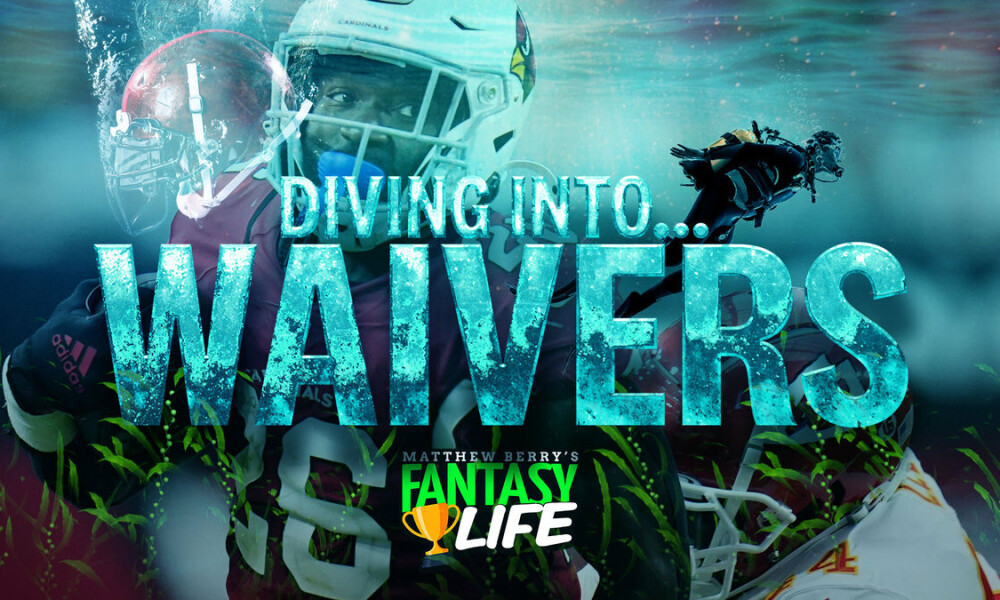 Lots of options on the wire...

In today’s Fantasy Life Newsletter presented by The Motley Fool:

Two fantasy juggernauts—the Bills and the Eagles—treated us to high-flying fantasy performances last night with Stefon Diggs and Jalen Hurts leading the way, while Darius Slay made Kirk Cousins and Justin Jefferson miserable.

But Week 2 is now in the books and it's time to set our sights on Week 3.

Whether you are undefeated or find yourself 0-2, today is a day to get your fantasy football house in order. There's work to do, so roll up your sleeves and let's improve these teams.

Here are some important player notes that should be on your radar before you hit the waiver wire and trade market.

⏩ Mike Evans - Evans got hit with a one-game suspension for unnecessary roughness with Saints' CB Marshon Lattimore on Sunday. He'll, unfortunately, miss this week's Bucs game vs. the Packers, though it's hard to disagree with his logic. Tom Brady will be passing to a skeleton crew in Week 3 unless Julio Jones can make a quick recovery. Breshad Perriman and Scotty Miller are decent fliers if you're in a pinch at WR.

⏩ Jerry Jeudy - Despite what looked like a bad shoulder injury on Sunday, Jeudy dodged a bullet and is considered "day-to-day" with what is now being reported as a chest/sternum issue. By the way, did you guys know Jeudy had a huge fascination with Big Bird in 2013? Learn something new every day.

⏩ Dalton Schultz - As if it couldn't get any worse for the Cowboys, their starting TE is now dealing with a PCL issue in his right knee. The MRI results were positive, and he's expected to avoid an extended absence, but it's still likely he misses a few games. CeeDee Lamb will continue to see a massive target share while he's out. Some TEs to consider as replacements: Logan Thomas, Tyler Conklin, Isaiah Likely, and Hayden Hurst.

⏩ Tyrion Davis-Price - Right when it looked like Niners rookie RB TDP was about to carve out a role in the post-Eli Mitchell backfield, he was diagnosed with a high-ankle sprain and will miss at least a few weeks. San Francisco's 2022 season is playing out like some twisted Final Destination sequel. Sam Wallace covers which new Niners RBs you should pick up in his waiver wire piece below.

🃏 The next great company to invest in... 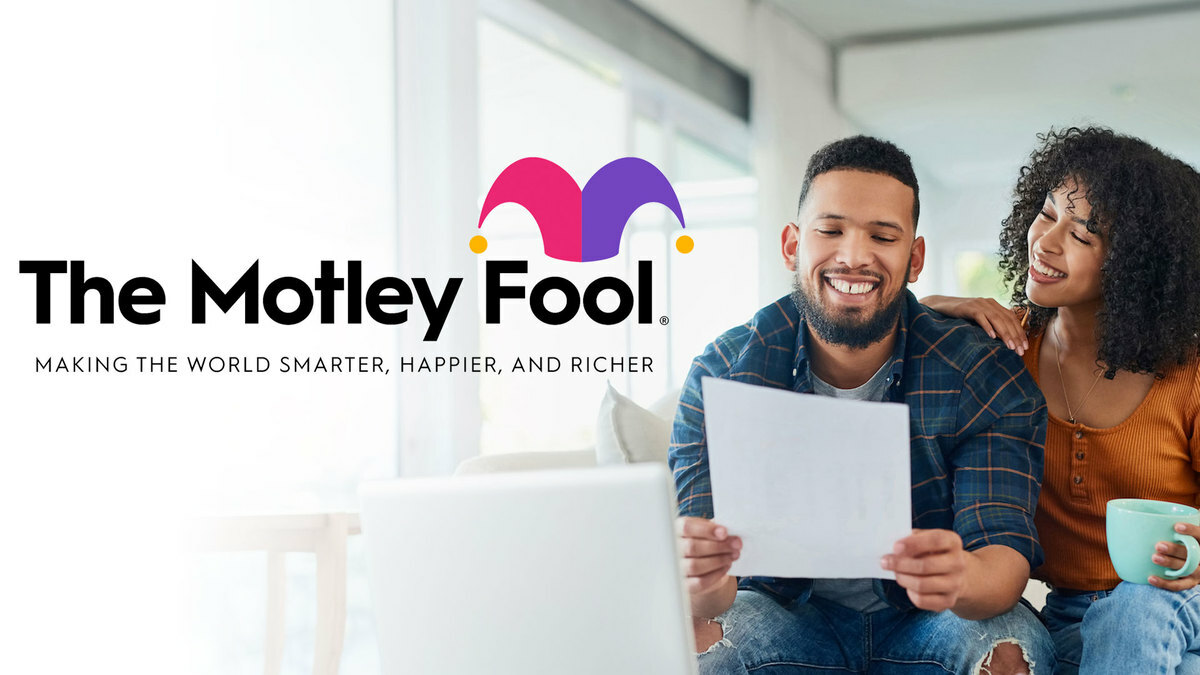 How many more Americans will become wealthy from this one stock?

The Motley Fool Stock Advisor team is so confident in this “millionaire maker” that they’ve issued a rare “triple-down” buy alert on this amazing company.

A “triple-down” buy alert occurs when the team finds a company that they are so confident in that they recommend it for a third time.

In the entire 19-year history of Motley Fool Stock Advisor, only 31 stocks have earned a “triple down” buy alert.

This rare signal has identified some of the best-performing stocks of the last 2 decades:

Now Stock Advisor is tripling down on another company.

Find out which stock they’re talking about and why this remarkable company could be worth much more than you think:

The next great stock

Returns as of 9/6/22. Past performance is no guarantee of future results. Individual investment results may vary. All investing involves risk of loss.

Each week during the season, Cooterdoodle walks us through the fantasy trade market from a buy, hold, sell perspective...

Pollard enthusiasts are thrilled with his performance against the Bengals this Sunday. Not only was he more efficient than Ezekiel Elliott on the ground, but Pollard also saw seven targets for 55 yards through the air.

While Pollard hasn’t outshined Zeke enough to discard him entirely, he is going to put up numbers week to week. This is exactly like the Aaron Jones / AJ Dillon experience… if Jones was completely underperforming. Go get Tony.

Tampa Bay had a rough outing in New Orleans this weekend. RIP to another Microsoft Surface. Despite his 87% snap share, the Saints held Fournette to only 65 yards on 24 carries. If you’re familiar with the rivalry, this wasn’t much of a surprise.

Fournette will continue to see opportunities on the ground with this offense, and he will be able to capitalize on them in the coming weeks. With many rosters in need of RB upgrades, Lenny is the perfect trade target. Not only is he one of the few backs not in a committee, but he has also promised us more TDs. And I believe him. 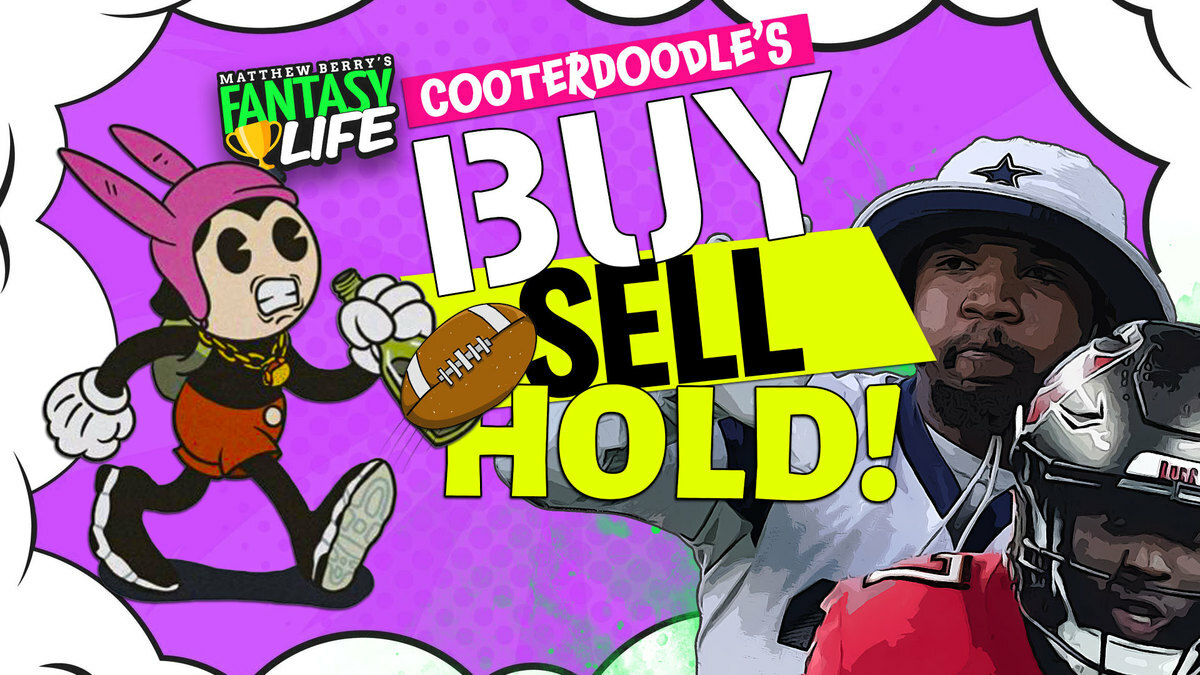 “But Cooter, what if it doesn’t get better….” I KNOW! Hear me out: I’m not impervious to the nauseating side effects of watching Pitts log only 2 receptions for 19 yards in both Week 1 AND Week 2, but that’s what Pepto Bismol is for. (Sponsor me, Pepto.) Take a swig and start negotiating. The ones who drafted Pitts have upset tummies and bubble guts.

Maybe they’re ready to dump him. While a total of 38 yards is less than exciting, there is still hope for the TE that was Promised. He’s taking most of his snaps at WR, and he’s got the talent. He just needs the ball, Arthur Smith!

Harris is what I’m going to call a “soft hold”. I’m not super worried, but I’m not comfy either. There are a lot of questions swirling after Week 2. Is his injury worse than we think? Is he stuck with a subpar o-line? Is he making poor choices on the field?

I don’t have the answers.

I’m not panic selling, but if you can negotiate your way into getting a player that you trust more, take it.

🤮 Why it's going to be an ugly year for Darnell Mooney and Cole Kmet. Oof.

💥 The rookies are blowing up. It happens fast.

🤢 A wild stat on the Panthers' offense. This is gross.

🤣 The Cardinals are a Benny Hill sketch. Lol.

🎨 Drawing Jimmy G every day until he gets traded. The bit that keeps on giving.

🏆 Only 6 NFL teams remain undefeated. Who will be the last team standing?

Waivers are a critical component of fantasy football, and nabbing the next league winner ahead of your leaguemates can help you edge out that title. Each Tuesday, Sam Wallace will highlight players to target in your redraft leagues. Here are four players you should scoop up before your leaguemates.. 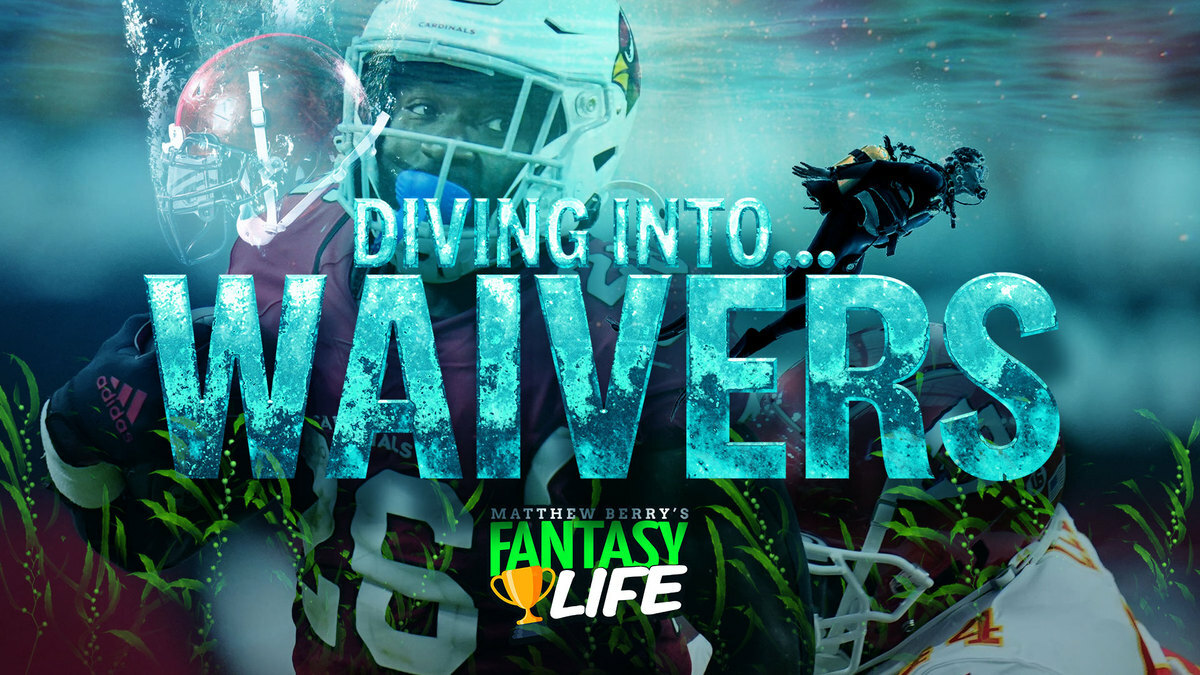 I'll be using ESPN's "percentage rostered" data. Players are listed in order of priority, by position. Only players who are available in at least 75% of leagues are considered.

As Peter mentioned above, rookie RB Tyrion Davis-Price suffered an ankle injury and is expected to miss a few weeks, so it's time to identify the next man up.

QB Cooper Rush got his first start of the season as Dak Prescott begins his recovery from thumb surgery. After 1+ game of Rush under center, WR Noah Brown has been the biggest beneficiary. His 16% target share on Sunday isn’t ideal but, courtesy of PFF, he played 52 offensive snaps compared to 58 for WR CeeDee Lamb.

Rookie WR Jalen Tolbert was a healthy scratch again, and veteran WR Michael Gallup has yet to return from his ACL injury. Brown has racked up 10 receptions (14 targets) for 159 yards and a score this season. Lamb is the WR1 by designation, but Brown should carve out a role.

Benjamin has exactly three receptions in consecutive weeks and has been running as the RB2 thus far. If Conner were to miss extended time, Benjamin would likely get the first crack at the role, but Williams has been excellent when given the chance.

Outside of WR Brandin Cooks, there isn’t much offense in Houston. However, WR Nico Collins could change that. He saw nine targets this week (one behind Cooks) and led the team in receiving yards. Courtesy of PFF, Collins has run 61 routes to 76 for Cooks.

The offensive output for the Texans might not amount to much, but Collins has seen at least 42 snaps in each game. The route participation is turning into production.

Last week I debuted a new series, Dear Pete, where I answer your questions about anything under the sun--fantasy football, relationships, work, family. You name it.

Seriously, you name it. On Saturday, I helped someone brainstorm solutions for a dog named Kelce who wouldn't stop barking during games.

What I'm trying to say is I'm here to help.

Send your fantasy questions to dearpete@fantasylife.com for a chance to get them answered each Saturday in the Fantasy Life newsletter. 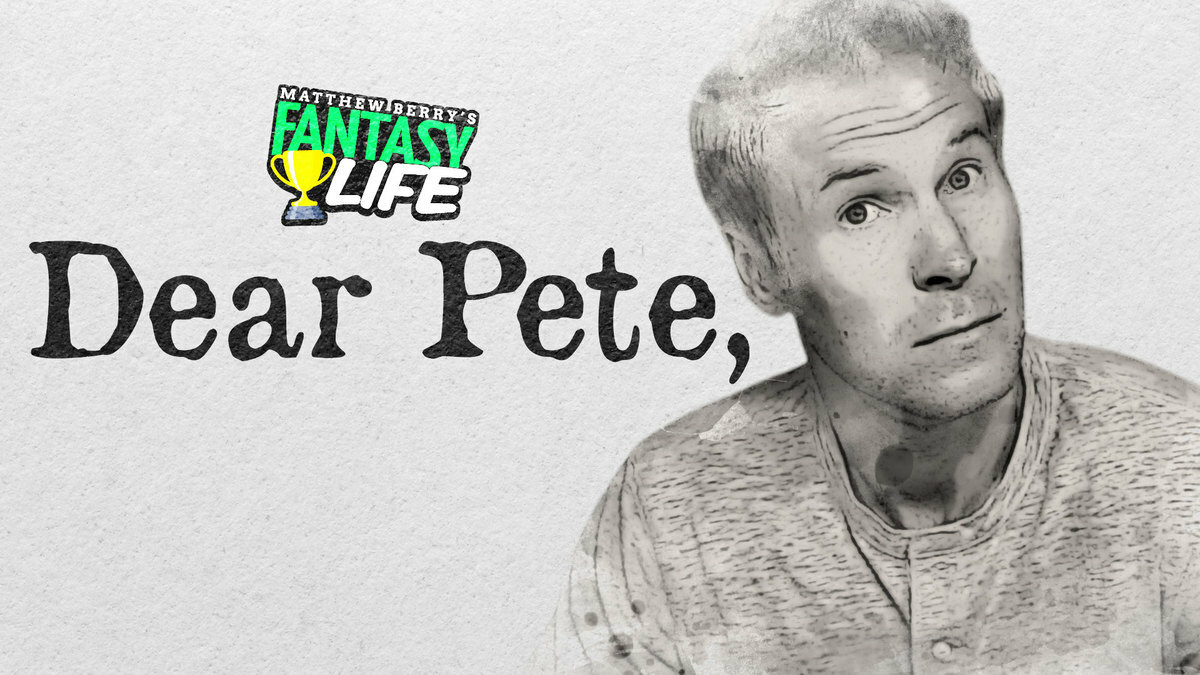 Playing safe ain't it. We need to make big moves to win our leagues. Today, Sam Holt shares a RB she thinks is primed for a breakout...

Sitting at third on the depth chart coming into the season, Garrett Wilson was the rookie we all thought could have serious upside.

After two weeks, Wilson is the Jets' target leader amongst all receivers. Wilson was the most dominant receiver for the Jets this Sunday. Hauling in eight catches on 14 targets for 102 yards and two TDs for 30 PPR fantasy points.

Is this output for Wilson sustainable? A two-touchdown week will be hard to maintain going forward. However, focusing on the targets he’s seen so far, I love his potential ceiling. He had eight targets in week one for four catches and 55 yards, decent numbers, and had one of those catches been a touchdown, this higher floor would be even more apparent.

For the rest of the season, Moore will remain the WR1 for the Jets, and Wilson could step into the WR2 role over Corey Davis. Looking at their route participation on Sunday, Moore dominated with 94% of routes run, Moore and Davis each had 76%. Given Wilson’s early success in the endzone, I could see him being a favorite target for Flacco. 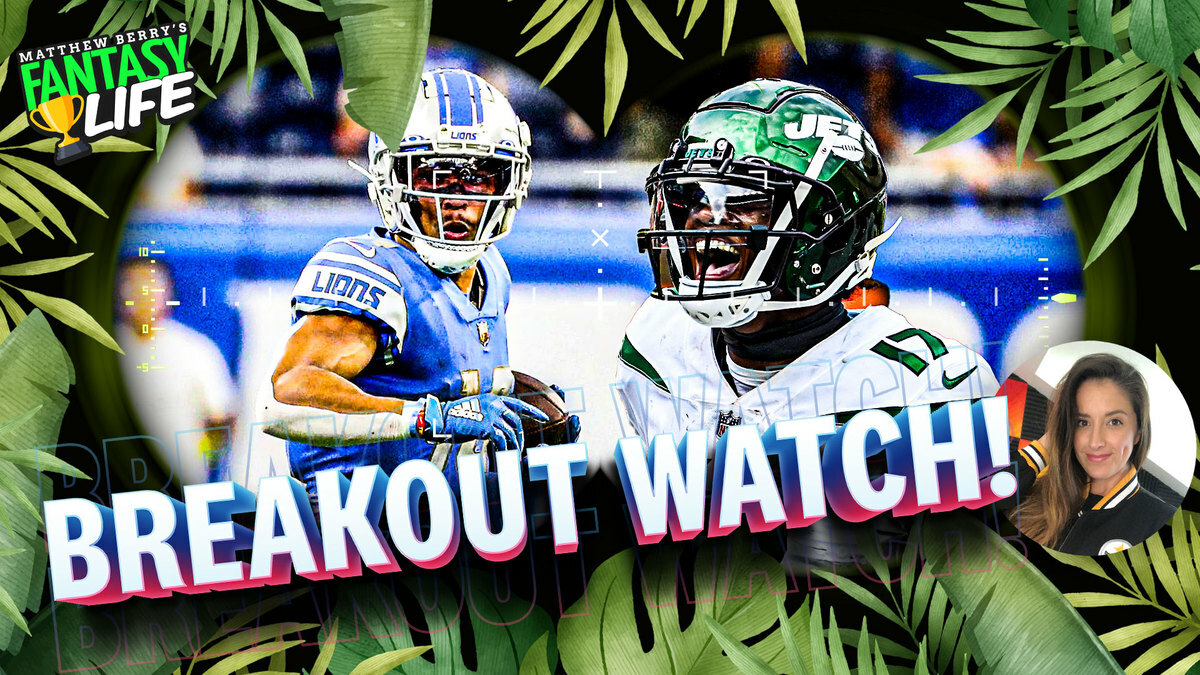 St. Brown finished last season with a burst that landed him on fantasy managers' lists heading into the 2022 season. During the last four weeks of the 2021 season, St. Brown had at least 10 targets, 90 yards, and one TD in each game. The spark we saw then has continued into this season right off the bat.

I see no end to this street in sight. Taking this floor and projecting the averages of his current stats going forward, he would finish the season with 144.5 receptions on 204 targets for 1530 yards, and 25.5 TDs. Going one step further, his 25.5 TDs would tie Cooper Kupp’s current pace, and his 144.5 receptions would beat Justin Jefferson’s projected end-of-season 127.5 total catches.

St. Brown is turning into a fantasy superstar before our eyes.