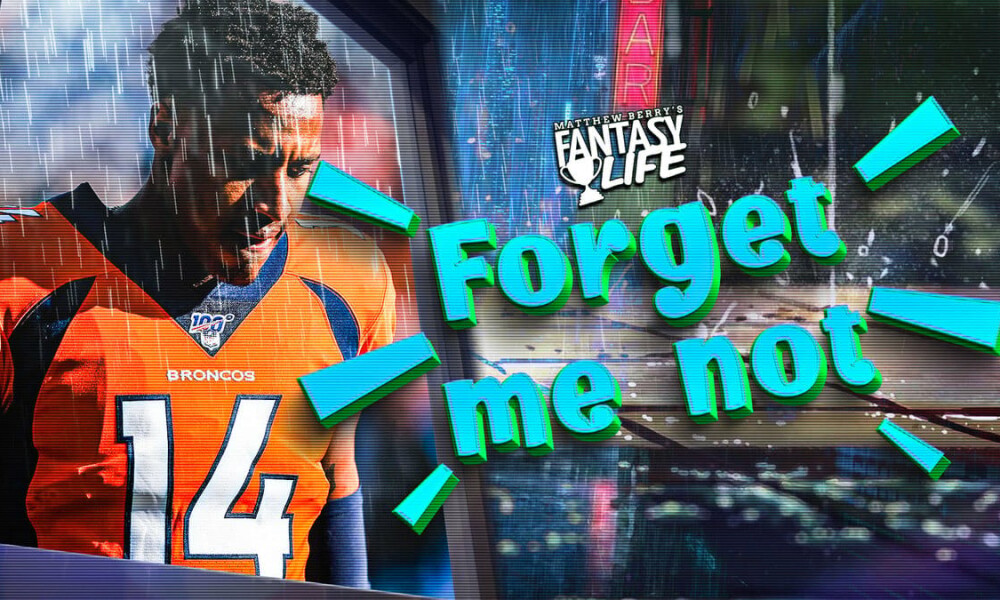 ❓ The Question On Everyone's Mind

When Patrick Mahomes had his leg rolled up on during the Chiefs Divisional Round matchup with the Jaguars, I thought he was done for the year.

Next thing you know, he's back on the field, hobbling around, and still completing 12-18 passes for 118 yards and a TD.

After the Chiefs pulled off the win, we were all left wondering the exact same thing...

How bad is this reported high ankle sprain?
Will he be able to play Sunday vs. the Bengals??

At least the latter part of that question was quickly answered yesterday:

#Chiefs coach Andy Reid told reporters that QB Patrick Mahomes "worked hard on the treatment and is doing OK." Asked about his status, Reid says he's "gonna play" and that this isn't as serious as the one Mahomes suffered in 2019.

That part of the equation is hardly a surprise. Hell, Mahomes initially refused to leave the sideline for x-rays to confirm nothing was broken. There is zero chance he's letting anyone bench him during the AFC Championship game.

But the real question is how effective will he be?

Mahomes is on record saying that the injury caused him to miss some throws vs. the Jags, and it will be nearly impossible for him to scramble. Still, everything the team is telling us is that it's not that bad:

Andy Reid said he thinks Patrick Mahomes' right high-ankle sprain "isn't quite as bad as that one" the quarterback sustained on opening day against the Jaguars in 2019.

Mahomes played the following week, throwing 4 touchdown passes in a win over the Raiders.

And it's hard to argue with their conclusion. Even after the injury, he still produced at a high level relative to other QBs. The practice reports this week will be crucial in determining how healthy he'll actually be heading into the game and we'll be sure to keep you posted as we learn more.

I don't doubt that a hobbled Mahomes can still be solid, but the Chiefs (who are only -1.5 point home underdogs) will need the elite version to compete with a red-hot Bengals team.

I'm personally skeptical that's who will be showing up on Sunday and I'm already placing my bets accordingly.

👖 Jeans Are Canceled. Confused About What To Wear?

Imagine keeping your pants on after a long day at work...and enjoying it.

Public Rec makes the most comfortable athleisure — and they’re hooking you up.

Enjoy up to 40% off the essentials, including their All Day Every Day Jogger and Workday Pant 1.0.

This isn’t your ordinary sale where a brand’s trying to get rid of all their sh*t.

Public Rec only offers this twice a year; you could transform your whole style while also maintaining your max comfort level (see the Luxe Fleece and Weekend Series for more...).

With the fantasy season behind us, all we can do is look forward. Let’s talk about fantasy lessons learned during the Divisional Round from a buy, sell perspective. Take it away, Cooterdoodle…

It only takes a quick stroll around Twitter to find the Brock Purdy haters. Sure, Purdy never ended up throwing a TD against the Cowboys and most of the 49ers points came from Robbie Gould. And sure, Purdy may be thriving due to the system that he’s in. And yeah, maybe I’m biased now that I’ve declared myself part of the 49ers bandwagon.

If the 49ers lose I will breathe through my mouth for the remainder of the year.

For perspective, let’s take a look back to your fantasy football matchups. Don’t be shy. Some of those wins were ugly, weren’t they? It didn’t matter if you won by .02 points or if a kicker carried you to victory. A win is a win. Let’s let winners be winners. And most importantly, let fans celebrate.

Regardless of team affiliations, NFL fans are starting to take sides. But even if you’re rooting for the Chiefs this week, we have to talk about the living, breathing, daddy of swag: Joe Burrow.

He’s looked good all year long, ranking 5th in passing yards and tied for 2nd on passing TDs amongst all QBs in the regular season. Not only did he pull off a big win against the Bills in the Divisional Round, but Burrow has been pulling off unique looks, too. Confidence is key, and Burrow’s got it.

The Bengals will beat the Chiefs in the AFC Championship (at least in style) and here’s why:

How will Burrow pull up to Arrowhead Stadium? Will he rock a bucket hat, a suit, or a onesie? I don’t know, but I do know he’ll look good doing it.

📜 This isn't the first time Brock Purdy & Jalen Hurts have played. The rematch no one saw coming.

💪 The RedZone monsters. The definitive list of Grown Ass Men who score TDs.

How do the Bills move forward from here? What's next?

❓ From 2nd worst to 1st? Probably not, but the Texans have a lot of work to do.

📺 Cowboys fans are handling the loss well. Calm and collected, even.

🤑 Aaron Rodgers could be on the move. Is it a steep price?

The NFL offseason will be in full swing before we know it, with coaching changes, free agency and the NFL draft reshaping the 2023 fantasy football landscape. With that in mind, the Fantasy Life squad is breaking down every NFL team to determine what went wrong in 2022 and identify paths to improvement. Geoff is here to take on our next project, the Broncos...

From a failed catchphrase, to the most cringe-worthy sandwich commercial of all time, it’s safe to say nothing went right for the Denver Broncos in 2022-23.

The biggest disappointment was undoubtedly Russell Wilson who ranked outside the top 12 at quarterback in fantasy scoring for the first time in his career when he's played 15 or more games.

Wilson wasn’t the only failure, but his downfall was so prolific that it produced a black cloud that seemed to hang on this franchise all season.

One thing is certain, if a true turnaround is to occur in 2023, then this team can’t afford any mistakes. With that in mind, let’s dive in and get to our recommendations on how to fix the Broncos, a team in desperate need of a fresh start.

1. Sean Payton - no matter what

If we learned anything from last season’s coaching hires it’s that one of the most undervalued assets in the league is an experienced, offensive-minded head coach.

Doug Pederson performed miracles with Jacksonville in 2022-23, and Sean Payton’s record suggests he could do the same with Denver.

Over 15 seasons Payton had just four teams with losing records and his teams in New Orleans never failed to win fewer than seven games.

Payton would also be a boon for many of the Bronco's skill players. His offenses ranked top 10 in yardage differential in 15 of his 18 years as a head coach (or offensive coordinator), and he produced a ton of efficient seasons from Drew Brees on the tail end of his career.

This one feels non-negotiable. The Broncos best shot at a turnaround next season involves getting Sean Payton and settling for almost anyone else at head coach will feel like a letdown.

Both Courtland Sutton and Jerry Jeudy failed to impress in 2022 with both players ranking well outside the top 40 in PFF rankings for their position.

Of the two, Sutton was the biggest disappointment. He was expected to take to a leap forward with Wilson but instead regressed and ranked fourth in the league in drops.

At age 27 Sutton is now at a point where expecting him to break his pattern of underperformance seems a touch foolhardy.

Editors note: Geoff is clearly out on Sutton, but for a more positive outlook on the Broncos' WR read on to Sam's "Forget Me Not" piece below

Trading Sutton would also help Denver restock their draft pile and free up 18M in cap space, allowing them to chase the perennially underrated Jakobi Meyers as a replacement. Over the past three seasons, Meyer’s 69% contested catch rate was one of the best in the NFL.

Working in a run-first scheme, Meyers still ranked top 30 in full ppr scoring in each of the last two seasons with New England, and his ability on contested balls suggests there’s more upside lurking.

With a Meyers-Jeudy combo in 2023, we could potentially see two top-25 receivers emerge from this offense for fantasy, with neither likely to carry a ton of draft hype.

Denver’s management has made a lot of errors recently, but getting Dulcich in the 3rd round of the 2022 draft was not one of them.

There have been 24 TE performances of 85+ yards this season

Potential difference maker in the fantasy playoffs for redraft

In short, Dulcich was getting open when he was on the field, and when his opportunity increased so did his productivity. He also produced double-digit fantasy points in five of 10 games last season and was TE17 in fantasy scoring.

If the Broncos new hire commits to making Dulcich a full-time player, he’ll have every chance to end up within the top five players at his position next season in fantasy and be a game-changing receiver on offense.

Read the full Fantasy Fixer Recommendations for the Broncos:

Get The Rest Of The Blueprints!

Fantasy managers are quick to forget and are even quicker to move on. Sam Wallace looks at players dynasty managers should not forget about as we head into the fantasy football offseason.

Remember when the only thing the Broncos needed was a QB to take their roster to the next level?

On paper, Denver had it all: explosive RBs, dynamic WRs, and a QB in Russell Wilson who recently ripped off eight-straight top-10 seasons.

Unfortunately, we know how it ended.

First-time head coach Nathaniel Hackett didn’t even make it to the end of the year.

Denver (5-12) finished last in scoring with less than 17 points per game. The debacle of a season certainly left a bad taste in the mouth of many a fantasy manager but let’s not be too quick to move on.

Sutton (WR43) was overshadowed by fellow WR Jerry Jeudy (WR22) in the end-of-season rankings, but both WRs topped 100 targets and 60 receptions. Jeudy had about 150 more receiving yards and six TDs to Sutton’s two.

In four healthy seasons, Sutton is averaging 103 targets and 855 receiving yards per season. That proven track record of production coupled with a proven talent like Wilson is something I want on my dynasty teams.

Sutton is also a key component of the Broncos long-term plans. In November of 2021, he signed a four-year contract worth $60.8 million with almost $35 million guaranteed.

Fantasy managers need to make a decision. You’re either in the “Wilson is washed” camp or you’re not. I tend to side with the latter.

Admittedly, it’s a two-game sample, but the improvements are significant. It also closely aligns with who Wilson has been throughout his career. In his previous ten seasons, Wilson averaged over 22 points per game.

Now that is a sample size.

In both of Wilson’s last two seasons in Seattle, both Tyler Lockett and DK Metcalf finished as top-15 WRs. Wilson is still talented enough to support high-end fantasy options.

Courtesy of Underdog Fantasy, Sutton has a “2023 Way Too Early” ranking of WR43. That’s just too low. The incoming crop of rookie WRs might push him down even more.

Send out offers for Sutton in your dynasty leagues. I would happily part with a mid-2nd round rookie pick to land him. At 27-years old, coming off a down season, he’s likely priced at his floor. Lock up a talented wideout tethered to a proven, top-end QB.

The Playoff Preview is on @onamp TODAY!

Join @EliotCrist and @SamanthaRHolt as they preview the games and answer your questions! 🍿

Enjoy This Newsletter?
Get it delivered to your inbox every morning!