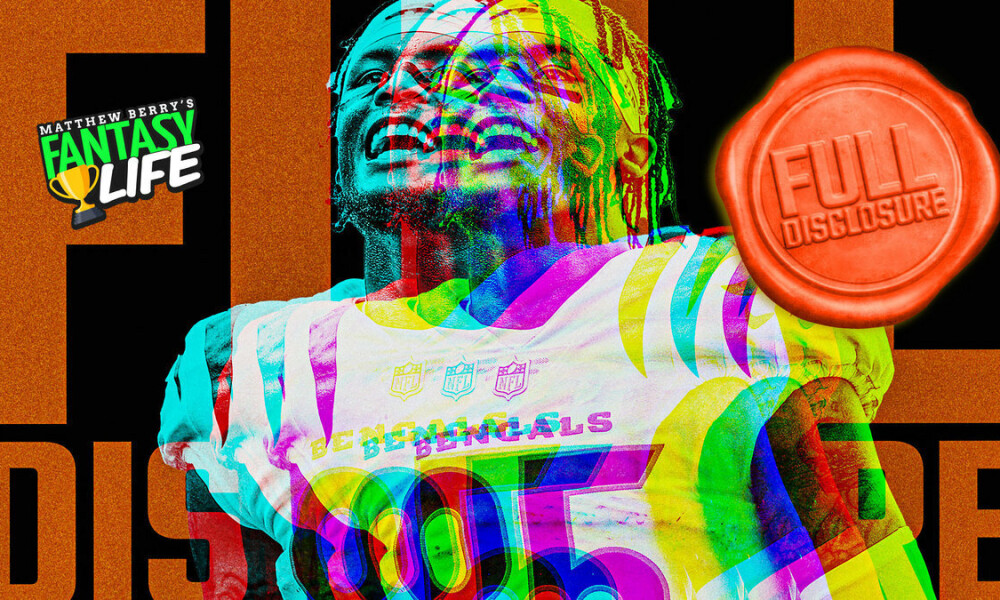 Is ADP just a social construct? Makes ya think...

Elite WRs dominated the 2022 offseason with many receiving big contracts, but now it's time to settle who is the best of the bunch.

Justin Jefferson weighed in on the subject in a recent interview with Complex:

It's always interesting to see how the traditional NFL watercooler debates match up with what's actually playing out in fantasy drafts.

There's currently a clear Top 3 WRs in drafts across all formats: Jefferson, Cooper Kupp, and Ja'Marr Chase. Those three rarely slip outside the Top 5-6 picks.

If Adams remained in Green Bay with Aaron Rodgers it's safe to assume he would have stretched that tier to a Top 4, but drafters are smartly downgrading his 2022 outlook with Derek Carr.

It's hard to disagree with Jefferson's premise that he'll flip Adams as the best WR in the NFL next year.

There's just one problem with his line of thought. He failed to mention his true competition for the No. 1 mantle in Chase.

Today Professor Pete explains why Week 17 is all that matters in these best ball tournaments and how we can plan for it.

We’ve covered a lot of ground at Best Ball Summer School these past few weeks and now it’s time to get an advanced degree.

Today we are going to build on all of the concepts we’ve learned–best ball basics, the dominant RB structures, why stacking is so important, and how to attack the QB & TE positions–and apply it to our ultimate goal: winning boo koo bucks on Underdog Fantasy.

And the common denominator to both those top prizes is that they will be awarded to the team who scores the most points in the Week 17 final.

Which brings us to our subject today…why Week 17 is all that matters. 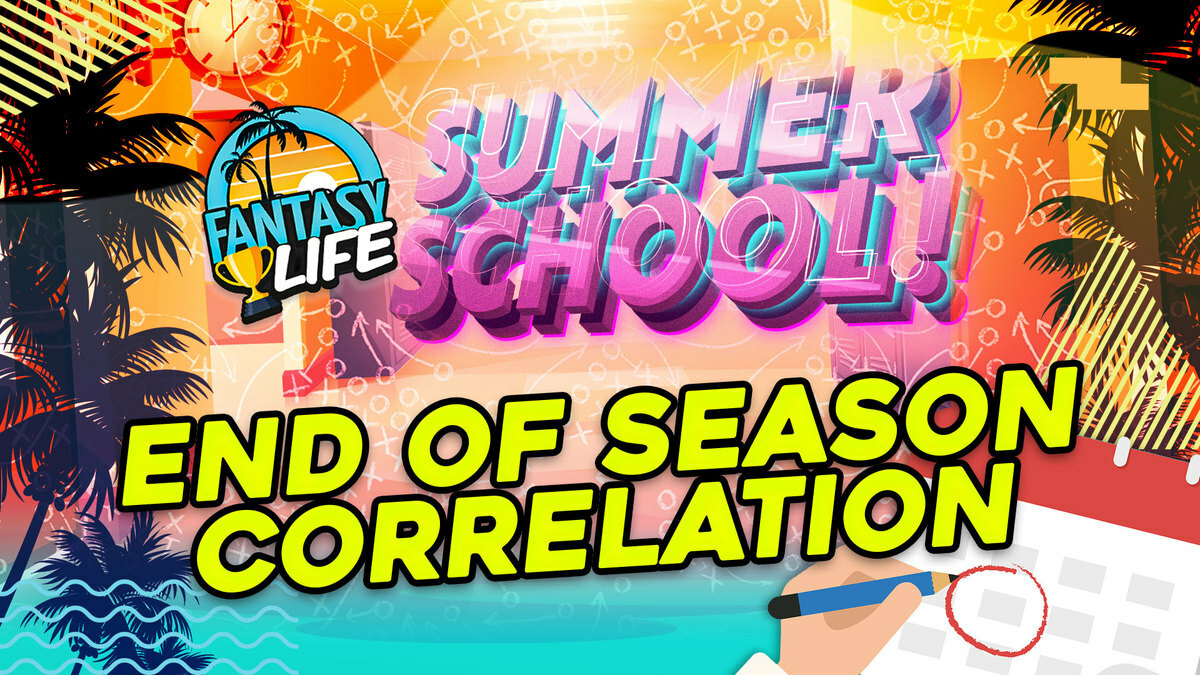 🏆 The Underdog Tournament Settings. I know what you’re thinking: Pete, aren’t there 16 weeks before then that matter too??

Before we answer that question, let’s back up and quickly review the BBM3 tournament settings (The Puppy structure is similar, just smaller) to better understand the puzzle we are trying to solve:

🧮 Understanding “EV”. Stick with me here. This will all make sense in a second.

To understand why week 17 is all that matters, it’s important to understand the concept of Expected Value aka EV.

EV is the return you can expect from some kind of investment. Here’s a simple way to understand it: If I gave you these two options, which would you choose?

Option 1: $50. No questions asked. I’ll send it over right now via paypal or venmo.

So even though you could lock up $50, if your goal is to maximize profit potential, you should take Option 2 every time because the EV is 5x greater ($250).

This is the exact line of thinking we should be applying to Best Ball Mania 3 where 90% of the prizes are paid out in Week 17 and 30% of the prizes go to the Top 2 finishers:

Rotoviz’s Michael Dubner calculated the EV for each round of BBM3 and the EV of the Week 17 finals is 529 TIMES greater than for Round 1:

Because it will be difficult to get to the finals in the first place–it truly is an insane gauntlet to traverse–it’s important that we give ourselves a chance to win the big money if we are fortunate enough to crash the dance.

📅 How to optimize for Week 17. Because the Week 17 finals is a 470-person field, we can essentially treat it like a small-field DFS tournament. With that premise, we can then think through how we would want to engineer our team in a Week 17-only contest.

The most important thing we can do is lean into stacking and correlation. We discussed this concept in depth in our Stacking Course a few weeks back and now we can apply that lesson directly to Week 17.

We know we want to stack QBs with their pass-catchers, but we can also take it to another level and think about targeting specific games.

One concept successful DFS players employ with their tournament lineups is a “bring back” to their stack. The idea is that if you have a Patrick Mahomes to Travis Kelce stack and they score a ton of points, it’s likely that the game is a shootout and a player on the other team is scoring a lot of points well.

This is where you can start brushing up on your schedule knowledge so you know the Chiefs play the Broncos in Week 17 and when you land that Mahomes/Kelce stack you can start thinking about a Broncos player to add to the squad (can I interest you in KJ Hamler?).

For more in-depth tips on how to optimize your lineups for Week 17, check out my video on the topic:

🤑 Winning $2,000,000. I know all of this might seem like “galaxy brain” logic, but to best 450,000 teams we are going to need to think outside the box and accumulate as many small edges as possible.

We won’t be able to correctly identify every game that shoots out, but we do know which teams are playing each other and that when one team scores a lot of points their opposition often does as well.

By leaning into the idea of correlation, specifically in Week 17 where all the money can be won, we’ll eliminate the number of things we have to get right to become a best ball millionaire.

You can get some reps stacking Week 17 games in BBM3 now. First-time depositors get up to a $100 deposit match with promo code LIFE:

🐆 Zach Wilson's mom rules out a suspect. The search continues.

🚑 The Patriots RB who is still hurt. Who is going to catch passes out of the New England backfield??

👕 Do the Bengals have the best uniform in the NFL? These all-whites are hot.

🔑 The key to unlocking the Eagles offense? Former Bachelor contestant and NFL TE Clay Harbor has some ideas for Jalen Hurts.

In this series, our contributors will disclose their favorite players and tell us why they can't stop drafting them. Today, Kevin Tompkins discloses his infatuation with Bengals WR Tee Higgins...

Why: My name is Kevin Tompkins, and I have a problem. I cannot stop drafting Tee Higgins. At the time of this writing, there is no known cure. I’m not sure there will ever be one.

Recently, I unveiled the players I’m drafting the most on Underdog and Higgins was firmly in that top three. Since that newsletter at the end of June, he’s become the player I’ve drafted the MOST.

His price of WR10 is just too way low relative to not only other WRs in his draft range but his teammate, Ja’Marr Chase. 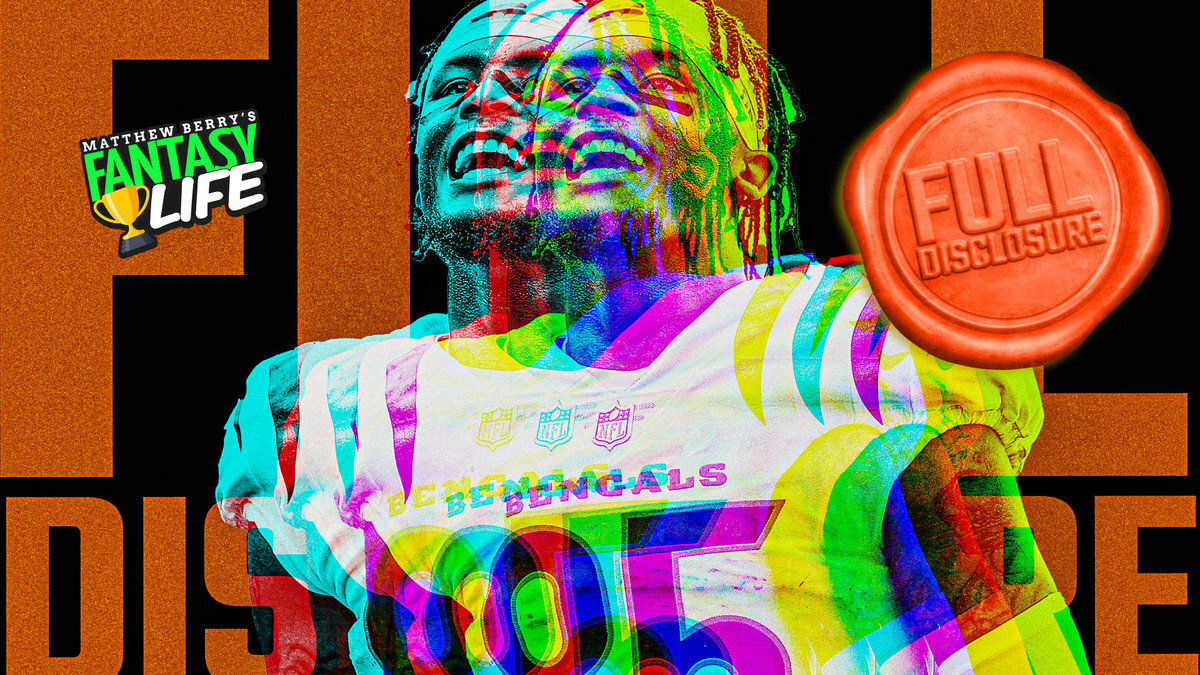 Even as the Bengals’ WR2, their offense is condensed enough with personnel and production that Higgins still attained a season-long 23.5% target share in 2021 — beating Chase’s target share by percentage points. Only one NFL team ran more plays out of 11 personnel (three WR in the formation) than the Bengals did with Higgins, Chase, and Tyler Boyd. Every other WR that played a snap for the Bengals in 2021 combined for just 27 targets. To illustrate even further with the number of routes run:

The Bengals just use their studs, and it's that simple.

Higgins will always be on the field running routes at an elite clip. Last season in Weeks 11-18 he bested his teammate Chase with more fantasy points, targets, receptions, receiving yards, and a higher target share on a per-game basis.

A cheaper alternative to playing the Bengals offense with an alpha wide receiver in Higgins? You love to see it.

Disclosure: Shed the “WR2” label and cement Higgins among the Top 12 WRs in fantasy. He represents a cheaper alternative to Chase in the first round and Higgins has out-performed him in stretches. Just know you’re unlikely to get him in a draft with me on Underdog, where you should use promo code: LIFE for a $100 deposit match.

The season is fast approaching, which means it is time for us to get to know all of these NFL teams and who we should be drafting and fading after a busy offseason. In today's team preview, Sam Wallace previews the Cincinnati Bengals.

The Bengals came up just short in Super Bowl LVI, falling to the Rams 23-20. Losing on the biggest stage certainly comes with disappointment because there’s never a guarantee of making it back. However, Cincinnati did something last year that no other team had done before.

Courtesy of BetMGM, they are +185 to win their division which puts them No. 2 behind the Ravens. It remains to be seen how things will shake out in Cleveland, but this division should really be a two-team race. Regardless, the Bengals are built to make another deep playoff run. 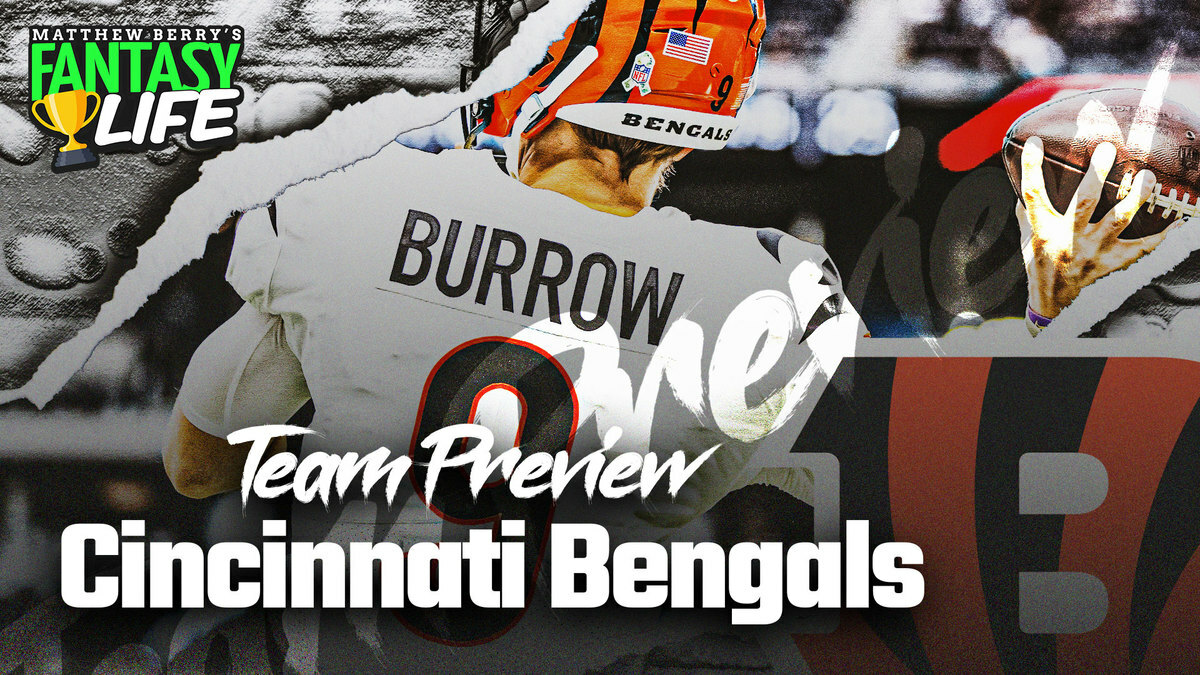 The Bengals addressed their offensive line in free agency and their defense via the draft. According to PFF, they have not only the most improved offensive line, but a top-10 unit. The plan is to keep their franchise QB on his feet a bit more this year. Burrow was sacked a league-high 51 times last season and 83 times over his first two seasons.

Ja’Marr Chase established himself as one of the premier wideouts after a phenomenal rookie season while Tee Higgins is likely the best 1B at the position in all of football. I’m all in on this offense at cost, minus Joe Mixon. Pete lays out the case quite simply:

Will Joe Mixon be a bellcow back? 👀