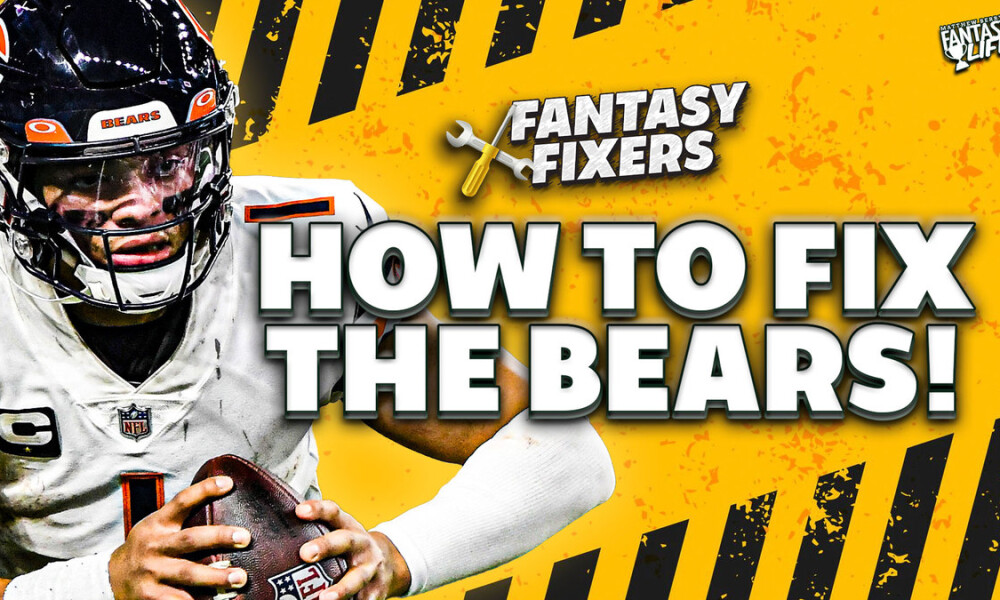 How To Fix The Bears

The Fantasy Life squad is breaking down every NFL team to determine what went wrong in 2022 and identify paths to improvement. Have no fear, the Fixers are here.

The NFL offseason will be in full swing before we know it, with coaching changes, free agency, and the NFL draft reshaping the 2023 fantasy football landscape. With that in mind, the Fantasy Life squad is breaking down every NFL team to determine what went wrong in 2022 and identify paths to improvement. Who knows, maybe an NFL GM will read this and realize those fantasy nerds aren’t so crazy after all – we all want the same thing, more points, and more wins!!!

How To Fix The Bears

The Chicago Bears managed to pull off an extremely difficult task in 2022-23: They finished with the worst record in the league, yet somehow, their future seems brighter than ever. A 10-game losing streak to end the season saw them overtake the Texans for the No. 1 pick, but Justin Fields emerged as a legitimate franchise quarterback.

Many of their losses were very competitive, putting the team in an enviable position heading into the offseason.

Not only does the team have the No. 1 overall pick, but they also secured the Ravens’ second-round selection after trading away Roquan Smith. However, the team moved their own second-round pick in exchange for Chase Claypool, which seems a bit steep now that the Bears know where they’re picking.

The big question surrounding this team is what to do with the top pick, but the team has multiple areas that need to be addressed. Let’s dive in.

Don't worry, we won't leave you hanging. Here are our 3 suggestions for the Texans' front office. Ryan Poles, if you want to chat, just let me know!

Trade the No. 1 Overall Pick (or Justin Fields)

The Bears find themselves in the rare position of having a franchise quarterback and the No. 1 overall pick in the draft. That is exceedingly rare. It happened last year with the Jaguars, but that was also a year where there was no real consensus top quarterback available.

Myles Garrett, Jadaveon Clowney, and Eric Fisher have been non-quarterbacks to go first overall, but 10 of the past 14 No. 1 overall picks have been passers.

That creates a very fortuitous situation for the Bears. The Texans will almost assuredly be taking a quarterback with the No. 2 overall pick, so anyone who wants to have their pick of the signal callers will need to jump above them. There are plenty of teams who fit that description, so it should be a seller’s market.

Of course, the Bears could also choose the nuclear option of trading their current quarterback and drafting a new one.

We saw the Cardinals employ that strategy in 2019, opting to select Kyler Murray and jettisoning Josh Rosen to Miami. Fields is obviously much more accomplished than Rosen at this point, but it’s not as farfetched of a scenario as you think. Rosen was the No. 10 overall pick in the previous year, so there were plenty of people who thought the Cardinals should build around him at the time.

The fact remains that Fields is a far better fantasy quarterback than he is in real life.

The team won just three of his 15 starts this season, and he remains unproven as a starter. His rushing numbers saw a massive increase in the second half of the year – he averaged just under 95 rushing yards in his final 10 games – but he still averaged a meager 6.64 adjusted yards per attempt as a passer.

Trading away the pick remains the far more likely scenario, but it’s possible that the team falls in love with someone like Bryce Young, C.J. Stroud, or Will Levis.

You don’t have the opportunity to pick first every year, so they should take a long hard look at each of those passers. If they think one of them gives the team a better chance of returning to glory, they shouldn’t hesitate to pull the trigger.

Load up on Defense

One of the luxuries of having a young quarterback – be it Fields or someone else – is that you have the potential to load up around them. Most teams are paying their signal callers $25M+ per season, so getting a quarterback on a rookie deal gives you an advantage in the free-agent market.

We saw the Jaguars utilize this advantage perfectly in 2022. With a promising young quarterback in Trevor Lawrence, the team shelled out an absurd $267M in the offseason.

That was the top mark in the league by nearly $100M, and they were the top spenders in terms of guaranteed money as well.

Fast forward to the end of the regular season, and the Jaguars are headed back to the playoffs just one year after finishing with the worst record in the league.

That’s how quickly your luck can change in the NFL.

It’s pretty clear where the Bears need to focus their cash in 2023. The team has two solid, if unspectacular young receivers in Claypool and Darnell Mooney, while the offensive line was decent enough. Teven Jenkins turned in a spectacular season at guard – he ranked third at the position per Pro Football Focus – while the rest of the starting unit was passable. They could potentially use an upgrade at tackle, but this unit is good enough to compete.

The defense was the biggest issue. They ranked dead last in terms of points per game allowed, and they also had the worst rating per PFF. Outside of Eddie Jackson at safety, their entire unit has holes that need to be addressed.

The defensive line is clearly the biggest problem. None of their interior or edge defenders even ranked inside the top 100 at their position per PFF. They had the second-lowest adjusted sack rate in the league, and they ranked 27th in terms of yards per carry allowed. If you can’t generate any pressure or stop the run, you’re not going to win very many football games.

I’m not sure if they could entice someone like Javon Hargrave to leave Philly and come to Chicago, but that would be the perfect signing for this squad. Daron Payne would be another potential option to help beef up their interior, while Marcus Davenport makes a lot of sense off the edge.

The team could also stand for a cornerback upgrade or two. James Bradberry, Jamel Dean, and Cameron Sutton all fit the bill.

Add in another couple of early draft picks on that side of the ball, and this team could make a turnaround really quickly.

Bring the Offense to the 21st Century

I am a firm believer that you need to play to your strengths offensively, and the Bears’ biggest strength last year was the run game. No one in football ran the ball at a higher rate, and that makes sense when you have a dynamic mobile quarterback like Fields.

However, that doesn’t change the fact that running the ball is far less efficient than passing it. When you look at the top offenses in football, all of them rely heavily on the passing game. Out of the top four teams in terms of Football Outsiders offensive DVOA, three of them ranked in the top three in terms of pass rate over expectation.

Those teams were the Chiefs, Bills, and Bengals, and obviously, those teams have premier quarterbacks in Patrick Mahomes, Josh Allen, and Joe Burrow.

The other team in the top four is the Eagles, and that is who the Bears should look at as an example. The Eagles entered this year with a dynamic rusher at quarterback in Jalen Hurts, and the team did run the ball at the sixth-highest rate this season. However, the team also played with a ton of leads. In terms of pass rate over expectation, the Eagles actually ranked 10th.

That is the kind of balance that the Bears should strive for in 2023. Being a dominant run team should help set up a dominant passing attack. Hurts made that transition beautifully in his third professional season, and Fields needs to be given the chance to make the leap next season.

Chicago is the type of team that has historically been built around a dominant defense and a passable offense. I’m not sure if you can win in the modern NFL with that style of play. I’m not saying the Bears need to throw the ball 700 times next season, but they need to embrace a more dynamic offensive approach moving forward.