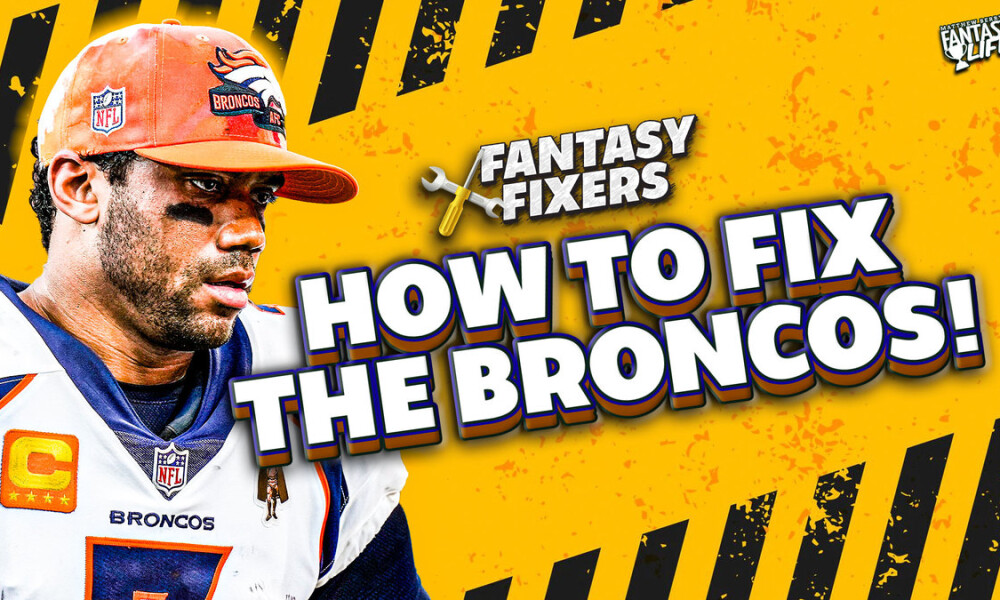 How To Fix The Broncos

The NFL offseason will be in full swing before we know it, with coaching changes, free agency and the NFL draft reshaping the 2023 fantasy football landscape. With that in mind, the Fantasy Life squad is breaking down every NFL team to determine what went wrong in 2022 and identify paths to improvement. Who knows, maybe an NFL GM will read this and realize those fantasy nerds aren’t so crazy after all – we all want the same thing, more points and more wins!!!

How To Fix The Broncos 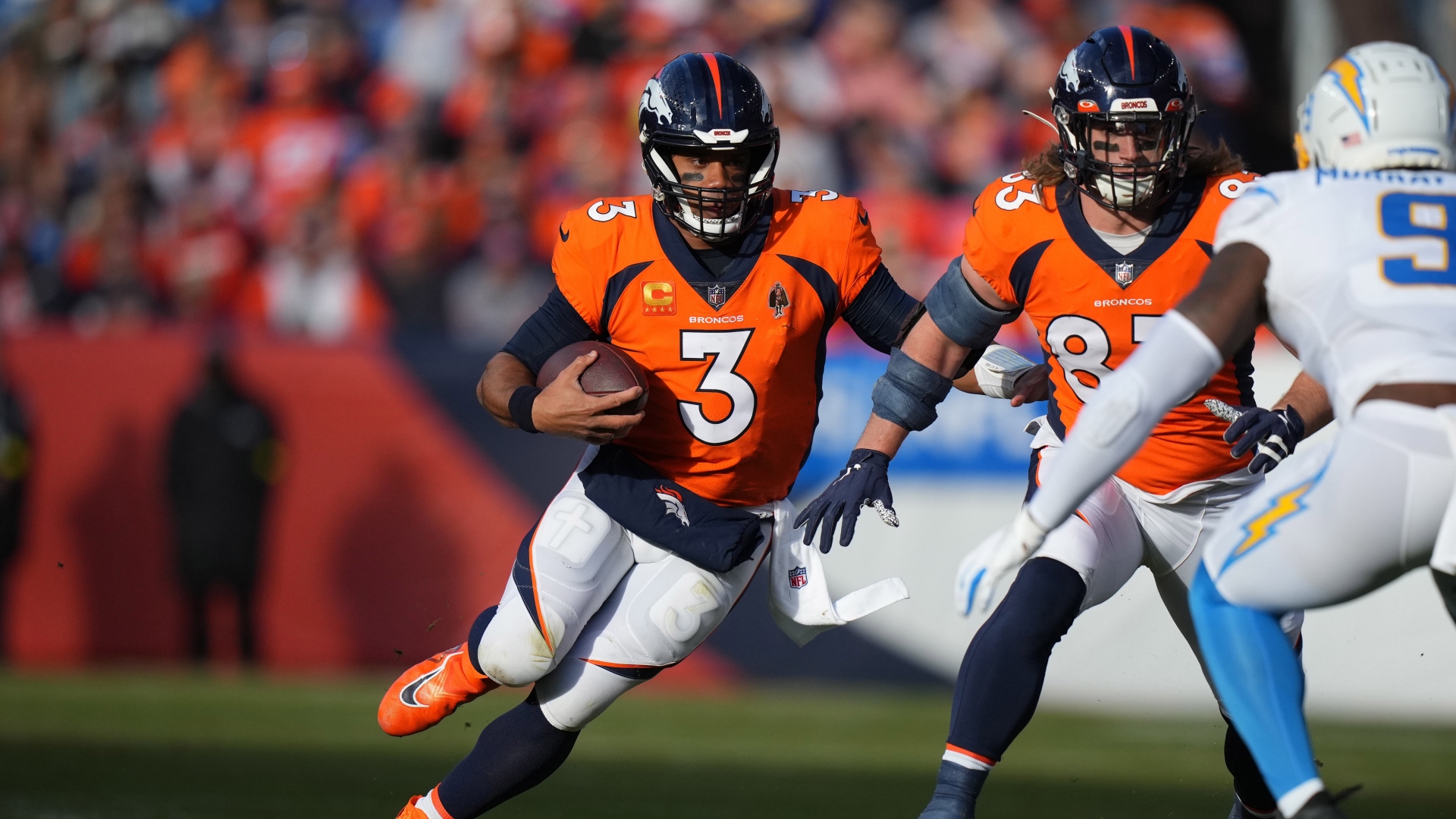 From a failed catch-phrase to the most cringe-worthy sandwich commercial of all time – plus a last-place showing in the AFC West sprinkled in – it’s safe to say nothing went right for the Denver Broncos in 2022-23.

While the combo of Nathaniel Hackett and Russell Wilson looked tantalizing at first glance, the two churned out nothing but burnt entrees on the field. Ultimately, Hackett was let go after 15 games and the Broncos quietly finished their tumultuous season ranked last in the AFC West with a 5-12 record.

Due to the high cost of acquiring Wilson, Denver now enters this year’s draft without their own first- and second-round draft picks, and in a tough spot to address potential weaknesses. They did manage to claw back a first-rounder when they traded Bradley Chubb to Miami, but that pick is attached to San Francisco which means it will now be a bottom-four pick.

In a lot of ways, the Broncos will be a very tough team to gauge for fantasy purposes next season. Denver didn’t have a single player ranked inside the top 15 at any of the skill positions for fantasy in 2022-23. Even if they do get an established offensive mind to lead the team, there will still be some massive trust issues given their underperformance last season.

The biggest disappointment was undoubtedly Russell Wilson who ranked outside the top 12 at quarterback in fantasy scoring for the first time in his career when he's played 15 or more games.

However, Wilson wasn’t the only failure. Wide Receivers Jerry Jeudy and Courtland Sutton were massive busts for the most part. Sutton graded outside of the top 50 players at his position on PFF and ranked fourth in the league in drops, with nine.

In a lot of ways, going back in on Denver players at low valuations may be a sharp move next season in redrafts and best ball, but it will also carry some big risks. A potentially-declining quarterback and some obvious talent issues at WR are the most obvious.

One thing is certain: if a true turnaround is to occur in 2023, this team can’t afford any more mistakes. With that in mind, let’s dive in and get to our recommendations on how to fix the Broncos, a team in desperate need of a complete overhaul but without a ton of resources to help facilitate it.

Sean Payton – no matter what

If we learned anything from last season’s coaching hires, it’s that one of the most undervalued assets in the league right now is an experienced, offensive-minded head coach.

Doug Pederson performed miracles with Jacksonville in 2022-23 – getting them within one step of the conference final in his first season with the team – and Payton’s record suggests he could do the same with Denver. Despite some hiccups in the playoffs and only taking his team to one Super Bowl in 15 years, you can’t argue with the success or consistency he’s had in the league. Payton went 152-89-0 in New Orleans from 2006 to 2021 and his teams never won fewer than seven games in a season.

Over 15 seasons, Payton had just four teams with losing records.

Payton’s record aside, just having a coach of his stature in the building every day would help take some of the pressure off Wilson, who felt like he was acting as quarterback, coach, and GM (and doing a poor job at all three) at times last year. If the Broncos were to go with the inexperienced coach route again, the microscope would be out from day one and Wilson would again be the focal point of attention.

Payton would also be a boon for many of the Broncos’ skill players. His offenses ranked top 10 in yardage differential in 15 of his 18 years as a head coach or offensive coordinator. From 2012 to 2020, a Saints wideout ranked inside the top 12 in fantasy scoring at the position six times.

Jerry Jeudy finished last season as WR18 in standard scoring and would likely get a massive bump with Payton, who was able to unleash the full talent of players like Marques Colston, Brandin Cooks, and Michael Thomas at various points during his tenure in New Orleans.

A Broncos turnaround next season is going to involve Russell Wilson – whether the fans want it or not – and the fact that Payton produced so many efficient seasons out of Drew Brees also makes him the best candidate to see if the Broncos can properly “fix” their most expensive asset before making a decision on his future.

This one feels non-negotiable, which is why I put it first on our list. The Broncos’ best shot at a turnaround next season involves getting Sean Payton and settling for almost anyone else as head coach will likely feel as if they’ve left some money on the table this summer.

Both Courtland Sutton and Jerry Jeudy failed to impress in 2022, with both players ranking well outside the top 40 in PFF rankings for their position.

Of the two, Sutton was the biggest disappointment. As mentioned above, he was expected to take to a leap forward with Wilson but instead regressed, posting a career-low in yards per reception and the second-worst aDOT of his career.

At age 27, Sutton is now at a point where expecting him to break his pattern of underperforming seems a touch foolhardy.

Jeudy didn’t exactly have a banner season either, but he did post a career-high in yards and TDs. Denver quarterbacks also had a 110.1 passer rating when targeting Jeudy, which was the highest mark of his career to date. The 23-year-old Jeudy is also four years younger than Sutton and offers more versatility for a new head coach to work with, given his ability to work as an inside-outside receiver.

Trading Sutton would also help Denver restock their draft pile. To compare, 28-year-old WR Calvin Ridley just cost the Jaguars a 4th and 5th round pick, with the 4th rounder also having terms that could turn it into a 2nd round pick, depending on Ridley’s playing time and performance. Sutton has far less baggage than Ridley, is a year younger, and would likely command a better return.

Dumping Sutton would also free up over $18 million in cap space and allow them to chase the perennially-underrated Jakobi Meyers as a replacement. A year younger than Sutton, Meyers looks like the exact kind of receiver that Wilson needs at this point in his career. Over the past three seasons, his 69% contested catch rate was one of the best in the NFL. In his second year as a full-time WR in New England, Meyers set career-highs in catch rate and TDs while producing a 116.0 passer rating from his quarterback when targeted.

Meyers profiles very similar to Doug Baldwin, a long-time Wilson favorite from his heyday in Seattle, and would be the perfect kind of player Denver could use to punish opponents underneath were they to overcompensate on Jeudy downfield.

Working in a run-first scheme, Meyers still ranked top-30 in full PPR scoring in each of the last two seasons with New England. His ability on contested balls suggests there’s more upside lurking for fantasy purposes if he was moved into a more pass-heavy environment and perhaps given a more substantial route tree.

With a Meyers-Jeudy combo in 2023, we could potentially see two top-25 wide receivers emerge from this offense for fantasy and neither would carry the kind of draft hype that we saw Denver’s receivers get last season.

Another factor supporting a Sutton trade is that the Broncos may have struck gold at TE with Greg Dulcich and Albert Okwuegbunam. Denver’s management may not have done much right lately, but getting Dulcich and Okwuegbunam in the 3rd (2022) and 4th (2020) rounds of the draft may make up for some of their other missteps.

As we’ve seen from offenses like Kansas City, Baltimore, and even New Orleans in the Jimmy Graham heyday (hint: Sean Payton coached that team), having big, skilled pass-catching TEs get matched up consistently against linebackers can be a nightmare for opposing defenses. Of the top 10 offenses in the league this season based on points scored, nine had at least one TE catch 45 or more passes, with the one exception being the Lions, who traded away T.J. Hockenson (85 receptions) mid-season.

Of the two, Dulcich has the most appeal by far. Over the 8+ games where he was healthy, he profiled with a team air yard share of over 20% and nearly a 20% team target share.

In short, Dulcich was getting open when he was healthy and when his opportunity increased, so did his productivity. He also produced double-digit fantasy points in five of 10 games last season and was TE17 in scoring, which was the highest rank for any Broncos RB or receiver in 2022.

If the new head coach opens up Dulcich’s route tree and participation, his numbers from last season suggest this is the kind of player who has the ceiling to land in the top-five scorers at TE.

Okwuegbunam is coming off another lost year and will certainly be a far less predictable asset for fantasy. That said, his in-season benching looked totally unjustified after he broke out in Week 17, earning a 16% team target share on 26 routes run.

If the Broncos new hire commits to making Dulcich a full-time player, he’ll have every chance to end up within the top-five players at his position. We may even see him co-exist with the athletic Okwuegbunam, who showed down the stretch that he has the versatility to play more of an outside role, and could even act as a sort of hybrid Sutton replacement were the team to take our recommendation and move on from him as well.

We have a lot of fixing to do. But we're on our way.