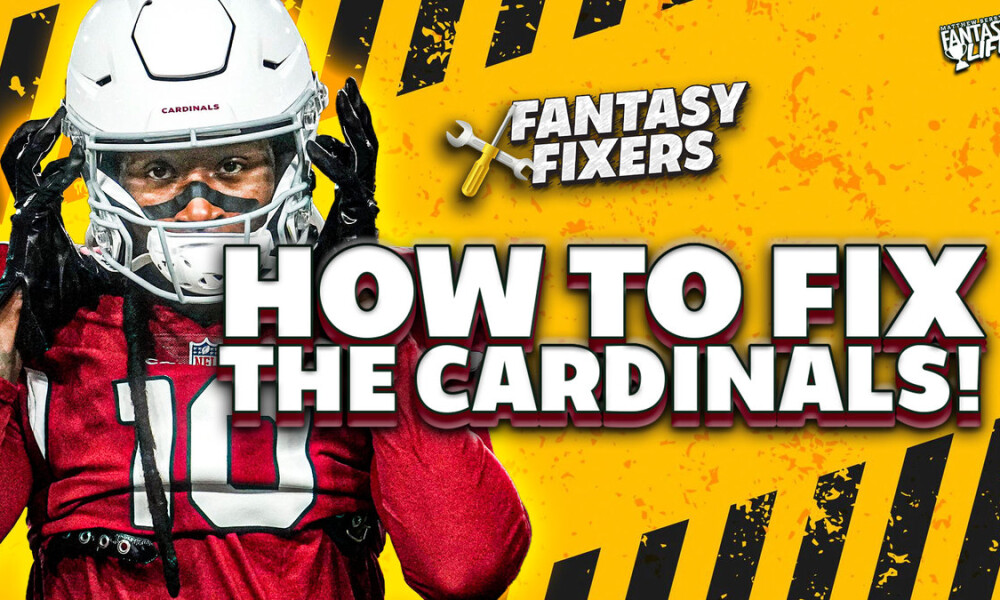 How To Fix The Cardinals

The NFL offseason will be in full swing before we know it, with coaching changes, free agency, and the NFL draft reshaping the 2023 fantasy football landscape. With that in mind, the Fantasy Life squad is breaking down every NFL team to determine what went wrong in 2022 and identify paths to improvement. Who knows, maybe an NFL GM will read this and realize those fantasy nerds aren’t so crazy after all – we all want the same thing, more points and more wins!!!

How To Fix The Cardinals

It’s safe to say that things didn’t exactly go right for the Cardinals in 2022-23. They won just four games, putting them in last place in the NFC West, and their former head coach is now on sabbatical in Thailand.

They were such a disappointment that Kliff Kingsbury literally had to flee the country.

That said, the cupboard in Arizona isn’t exactly bare. They have a potential franchise quarterback in Kyler Murray, and he has plenty of supporting talent around him. They won 11 games just one year ago, and after a 7-0 start, they were considered among the best teams in football. It’s not crazy to think they can turn things around quickly.

How can the Cardinals make that happen? Let’s take dive in.

Don't worry, we won't leave you hanging. Here are our 3 suggestions for the Cardinals' front office. Monti, if you need a hand, just let us know.

Get the Old Kyler Murray Back

This is the No. 1 priority for the Cardinals this offseason, and nothing else is even remotely close. Having a franchise quarterback covers up a lot of flaws, and prior to this season, the Cardinals appeared to have one with Murray.

He was arguably the best player in the NFL during the first seven weeks of the 2021-22 season. He led the team to a perfect record, and he ranked fourth among quarterbacks in Expected Points Added per play (EPA/play).

He averaged 286 passing yards per game with 17 passing touchdowns, and he added another three scores with his legs. The Cardinals’ offense scored at least 31 points in six of those contests, and everything appeared to be looking up in Arizona.

Injuries have been a big part of the diminutive quarterback’s career, and he suffered a torn ACL near the end of the 2022-23 season. He’s on track to return to the lineup before the start of the regular season, but for the first time since his rookie season, health isn’t the only question mark that Murray is facing.

The team rewarded Murray with a contract extension last offseason, and nothing has gone right since then. It all started with a clause in his contract that required the quarterback to study film during the week. If you think that sounds like the type of thing that shouldn’t need to be told to an NFL quarterback, you’re 100% right.

The clause ended up getting removed from Murray’s contract, but questions about the quarterback’s work ethic remain. Former teammate Patrick Peterson made headlines this season with some harsh criticism for Murray:

Peterson wasn’t alone, with an anonymous teammate recently telling Bally Sports’ Michael Silver that giving Murray an extension “created a monster.” He added that Murray felt less pressure to study the gameplan after getting paid and that the Cardinals’ collapse “felt predictable.”

Not everyone is going to have a Kobe Bryant-esque worth ethic, but the quarterback needs to be a leader in the NFL.

If he’s not putting in 100%, it is a major problem. Hopefully, this season served as a wake-up call for Kyler. If he’s not ready to put the work in next season, the Cardinals’ outlook suddenly looks very bleak.

Given the Cardinals’ 4-13 record, it makes sense that the team would consider rebuilding. Hopkins has emerged as an obvious trade candidate. He’s approaching the back nine of his career, and he’ll be 31 years old at the start of next season. He’s under contract for another two years, and with Hopkins still producing like a top receiver, the team could theoretically get a decent return.

Unlocking Murray’s potential is the easiest way for this franchise to return to relevance, and there’s no doubt that he’s been at his best when throwing to Hopkins. He was a huge part of the team’s 7-0 start two years ago, racking up seven touchdowns during that stretch. He missed the end of the year after getting suspended for PEDs, and when combined with Murray’s injury, the Cardinals’ offense wasn’t nearly as successful.

Hopkins returned from his suspension in Week 7 of the 2022-23 season, and he and Murray were immediately able to rekindle their connection. The two players combined for 8.7 receptions and 99.3 yards per game, and the duo added total touchdowns. The team took a massive step forward offensively in those contests, averaging 29.7 points per game.. Unfortunately, Murray went down with an injury in Week 9, so that was the most significant stretch that both players saw alongside each other.

The Cardinals do have a viable alternative to Hopkins in Marquise Brown, who was excellent in his own right while Hopkins was suspended. That said, we never really got to see how this duo would fare with Murray at quarterback. Brown went down with an injury right as Hopkins was ready to rejoin the lineup, and by the time Brown was ready to go, Kyler was operating at less than 100%. Ultimately, all three players were in the lineup for just two games together.

While it might be tempting for the Cardinals’ front office to view Brown as a Hopkins replacement, you need multiple receiving threats in the modern NFL.

Most of the best offenses in football have more than one pass-catcher that they can trust in big moments, and the Cardinals’ are pretty bare at receiver after Brown. A.J. Green is dust, and Rondale Moore and Greg Dortch profile more as No. 3 options.

With Hopkins and Brown both at full strength, the Cardinals could boast one of the best-receiving tandems in football. I think that’s an idea that’s at least worth exploring. If things don’t work out to start next season, they can still look to move Hopkins before the trade deadline.

The Cardinals have the No. 3 pick in the 2023 NFL Draft, and they should have their pick of the non-quarterbacks. There’s a chance that the Bears select a non-quarterback with the No. 1 pick, but I think the most likely scenario involves trading the pick to a QB-needy team like the Colts. The Texans will almost certainly select a quarterback at No. 2, so the Cardinals should be able to select their favorite from the rest of the prospects.

That should almost certainly be Anderson.

Anderson is considered by most to be the top prospect in draft after turning in two spectacular seasons at Alabama. He broke out as a true sophomore in 2021, racking up 101 tackles, 31.0 tackles for loss, and 17.5 sacks. He also had 81 pressures and 55 QB hurries, so he was a force rushing the passer.

Anderson wasn’t quite as dominant in his junior season, but he still racked up 10 sacks and 17 tackles for loss in 13 games played.

Anderson would fit like a glove on a Cardinals’ defense that sorely needs pass-rushing help. They ranked just 25th in adjusted sack rate, and they had the fourth-fewest sacks overall.

Making matter worse, the Cardinals will be losing their top pass-rusher to retirement. J.J. Watt might not be the same dominant force that he was in his prime, but he easily led the team with 56 pressures and 12.5 sacks this season. He earned the best pass-rush grade from Pro Football Focus among the Cardinals’ front seven, but Anderson could help fill that hole.

If, for some reason, the Bears do decide to take Anderson at No. 1, the Cardinals would arguably be in an even more advantageous position. It would open up a scenario where the team could trade their pick to a team looking to jump in front of the Colts for a quarterback, which would allow them to grab a few additional assets.

Things wouldn’t even be that bad if they had to stay put. The other top prospects in the class are also pass-rushers, with Jalen Carter and Myles Murphy both grading out well. Neither player is quite as impressive as Anderson, but the Cardinals should be able to walk out of the draft with a big addition on the defensive line. That would go a long way toward shoring up the rest of the defense, and the team could even double down with another defender with the 35th pick.

If they can bolster the defense through the draft and Murray bounces back in 2023, this team could make a return trip to the postseason.