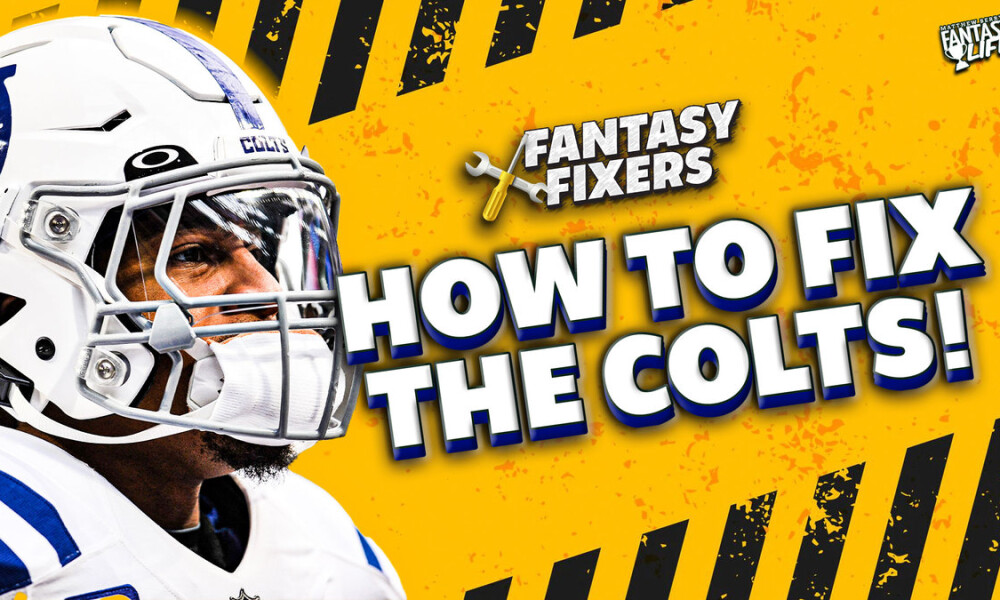 How To Fix The Colts

The NFL offseason will be in full swing before we know it, with coaching changes, free agency, and the NFL draft reshaping the 2023 fantasy football landscape. With that in mind, the Fantasy Life squad is breaking down every NFL team to determine what went wrong in 2022 and identify paths to improvement. Who knows, maybe an NFL GM will read this and realize those fantasy nerds aren’t so crazy after all – we all want the same thing, more points, and more wins!!!

How To Fix The Colts

It was a tough scene in Indianapolis this season, with Frank Reich fired in November and star RB Jonathan Taylor battling injuries throughout the season before shutting down for the final three games.

The Colts were outscored by an average of 8.1 points per game – which summarizes their 2022 campaign better than any other number. Over the previous two seasons, they finished inside the top eight, outscoring opponents by 5.1 points.

They were also a run-balanced offense during that time, opting to pass only 56% and 55% in the 2020 and 2021 seasons. The goal was to insulate their questionable QB situation by keeping defenses off-balance. However, that recipe imploded in 2022. With the team trailing by four-plus points third-most in the league (52% of the time), the team was forced to pass the ball on 62% of plays.

Whether focusing on traditional stats like yards and points or more advanced ones like expected points added per play (EPA) or PFF Grades, they all tell us the same story about the Colts’ offense: they were terrible.

Ryan’s performance deflated fantasy hopes for Michael Pittman Jr., who posted a solid 25% target share but couldn’t get much going at 9.3 yards per reception on a 7.7 ADOT.

Fortunately, the Colts can cut Ryan before March 17th and reduce his 2023 cap number from $35M to $18M, and they have the No. 4 pick in the NFL Draft, thanks to their Week 18 loss to the Texans.

Indianapolis has been on the Rent-A-QB plan since the unexpected retirement of Andrew Luck in 2019, but they finally have the chance to change that. This Colts offense could be a much more viable fantasy environment in 2023 with the right offseason decisions.

Don't worry, we won't leave you hanging. Here are our 3 suggestions for the Colts'' front office. Oh, and by the way Jim Irsay if you're looking for another friend to join the crew….

Be Ready to Trade Up for a QB

The Colts taking a QB early in the draft is a no-brainer. The question is whether they can get a top option at No. 4, or will they have to trade up to get their guy?

Speculation about the Bears trading out of the first pick is getting pretty frothy in NFL mock drafts and it makes sense, given how every team from pick No. 4 to pick No. 9 could be in the market:

The Cardinals could also consider trading out their pick at No. 3, assuming Kyler Murray’s contract extension means he is still their guy (and we think he should be). So, there is a scenario where if the Colts stand pat, they could miss out on the top-three options, with QB also making a ton of sense for Houston at No. 2.

The Colts have plenty of holes, so the preference would be holding at pick No. 4 and landing one of their favorite two QBs. However, they will need to ensure their competitive intel is tight to make the best decisions for their franchise.

Bryce Young, C.J. Stroud, and Will Levis are the consensus top-three options in mocks. If the Colts feel similarly about all three, they can likely hold tight and have one make it to them. However, if they see this as a one- or two-QB class, they should make a move.

With the addition of a high-end QB through the draft, the Colts won’t suddenly transform into a high-flying aerial attack. However, an upgrade to average QB play would stabilize the team and create an environment capable of supporting up to two mid-range receiving options with Jonathan Taylor still heavily involved.

My definition of QB-friendly is pretty simple.

Yeah, the Indianapolis QB room was terrible last season, but the offensive staff didn’t do them any favors, per PFF data.

Any one or two of these things don’t guarantee the success of an offense – talent is still the No. 1 factor. However, many of the best offenses incorporate these elements into their offense.

In the upgraded offense, Jared Goff rebounded from a career-low 6.4 YPA to 7.4.

Unfortunately, for other NFL teams, the big-brained OC re-committed to the Lions, giving him a substantial raise.

However, the template remains – the Colts must find an HC/OC combination that strives to provide their young QB with every advantage possible.

If the Colts trade up for the No. 1 overall pick, it will likely involve their second-rounder, which means they have to turn to free agency or inward to find new production in 2023. With Parris Campbell likely to hit free agency, Alec Pierce, Jelani Woods, and Kylen Granson are all candidates for more routes next season.

The question is whether they can earn more targets with the additional playing time. While all three players flashed at different points in 2022, Woods is the most interesting option for a couple reasons.

First, he delivered the second-highest PFF receiving grade (68.0) behind Pittman. He also had the second-highest YPRR (1.51) and TPRR (17%), which puts his rookie profile in the same neighborhood as Dallas Goedert and David Njoku but with less draft capital. Since 2011, the average low-end TE1 had a 19% TPRR and 1.59 YPRR, which is in range for Woods.

Second, it is easier to manufacture looks with TEs playing inside against linebackers and safeties in zone coverage than on the outside, like what Pierce faces. We have seen third- and fourth-rounders like Mark Andrews and Dalton Schultz emerge as viable fantasy options.

Woods doesn’t carry the same collegiate receiving resume, but the third-round pick stands 6’7” and ran an impressive 4.61 at the NFL combine, so there is a chance he could develop into a mismatch nightmare. In his only full-time game of the season in Week 12, he led the team with a 29% target share, leading to eight receptions for 98 yards.

In the Frank Reich era, the Colts deployed a maddening three-way TE committee that has left fantasy managers scratching their heads. However, the new coaching regime might not have the same tendencies, especially if Woods impresses throughout offseason workouts.

If Woods gets to 80% route participation in 2023, he could be a surprise mid-range TE1.