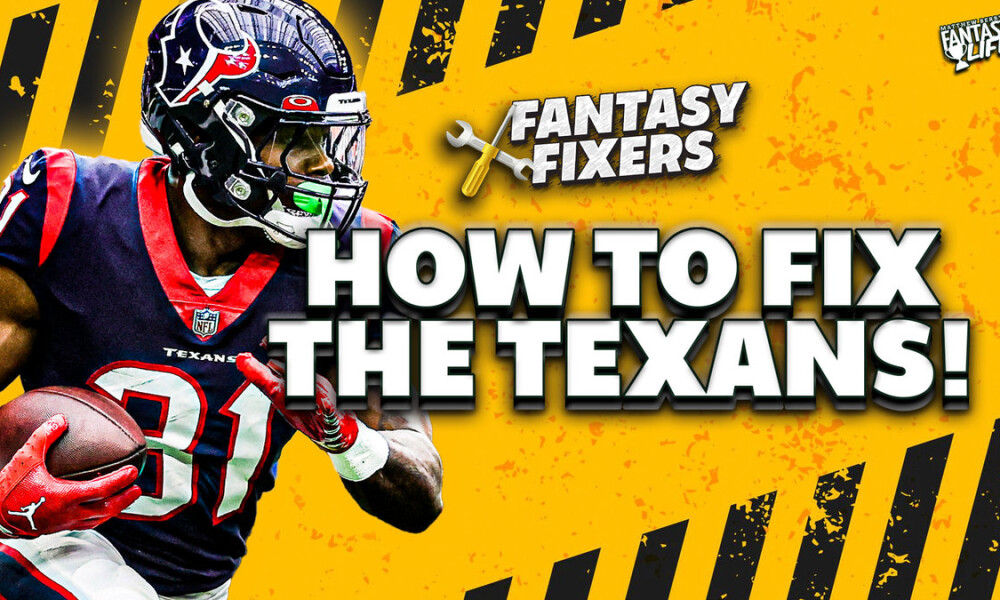 How To Fix The Texans

The NFL offseason will be in full swing before we know it, with coaching changes, free agency and the NFL draft reshaping the 2023 fantasy football landscape. With that in mind, the Fantasy Life squad is breaking down every NFL team to determine what went wrong in 2022 and identify paths to improvement.  Dwain is here to tackle the Texans...

How To Fix The Texans

Any way we slice the 2022 season for the Texans, things were bad. Really bad.

The team finished with a record of 3-13-1 and ranked at or near the bottom of the league across multiple key offensive and defensive statistics.

This team isn’t going to be a quick fix. We are likely looking at a multiple-year rebuild before the Texans compete at a high level. However, with the right coaching hire, they could surprise us similarly to Brian Daboll with an underperforming Giants roster.

Unfortunately, their win in Week 18 over Indianapolis knocked Houston down to the No. 2 selection in the NFL draft. Coincidingly, the Colts’ loss pushed them up to the No. 4 pick, putting the team in striking distance to trade up with Chicago to take a QB.

On the bright side, the Texans have five selections in the first three rounds, including an additional first-rounder (12th) and third-rounder (73rd) from the Browns in the Deshaun Watson trade.

They also have the eight-most estimated cap room at $40M, which could grow with their second-highest cap player – Brandin Cooks – making it known he would like to be traded this offseason.

From a fantasy perspective, we don’t have to wait for a complete rebuild to find value on the Texans' roster in 2023. We just need them to get a few things right this offseason to provide new paths to value.

Don't worry, we won't leave you hanging. Here are our 3 suggestions for the Texans' front office. Nick Caserio, if you want to chat, just let me know!

Just the hard-hitting type of analysis you were waiting for, huh? It doesn’t take a rocket scientist to understand that QB is the most crucial position in football, and Houston needs an upgrade.

Davis Mills ranked 25th out of 32 passers with at least 300 dropbacks in PFF passing grade (63.6) and 29th in QB rating (76.8). He also struggled to accurately target his receivers, with only 59% of his passes deemed catchable.

Alabama’s Bryce Young is the consensus top option across big boards and mock drafts, but C.J. Stroud from Ohio State follows closely behind. Will Levis out of Kentucky and Anthony Richardson aren’t as highly graded, but the position's value is pushing them inside the top 10 in mocks over the past two weeks.

Young and Stroud are highly decorated collegiate passers, while Levis and Richardson are projections based on their tools. The Texans might not get the top-rated QB on their board if another team trades up to No. 1, but they will have a shot at one of the top-two options.

While we won’t likely target the Texans’ rookie QB next season in fantasy drafts, the upgrade opens up possibilities elsewhere on offense – especially if the Texans can also secure a high-end receiver in the draft.

Avoid RB in the Draft

With so many needs, the Texans need to focus their picks on positions with more importance than RB in the first three rounds of the draft. Look, we love RBs here – we are a fantasy-first operation. However, the Texans already have a quality back on the team.

Dameon Pierce played at tremendous levels in his rookie season – it appears the Texans might have hit a home run with their fourth-round selection from the 2022 draft. Out of 43 RBs with at least 150 attempts, Pierce ranked highly across multiple metrics.

Pierce came in half of a percent lower than the NFL average of 10.5% in 10-plus yard attempts but overall enjoyed a very successful campaign. Remember, the Texans had a non-existent ground game in 2021 – ranking last in yards per game and yards per carry. Pierce drastically improved the RB room.

Pierce delivered an RB2-worthy TPRR of 19% but wasn’t fully unleashed on passing downs. His usage in the two-minute offense expanded as the season went on, but he only played 12% of long-down and distance situations. The Texans can get more out of him in this capacity – he deserves a shot to handle an every-down role, which would make him an RB1 candidate.

Of course, if the Texans ignore our advice and draft an RB in the first three rounds, it will be a dramatic hit to Pierce’s prospects. We have seen this play out over and over through the years (Michael Carter, James Robinson, etc.). A high-performing RB without draft capital is a fragile commodity.

The Texans are already linked to Quentin Johnston – who is earning high praise from many draft analysts – at the 12th pick in consensus mock drafts.

Whether or not they go for the TCU product is up for debate, but there are multiple high-end underclassmen available around that pick. USC’s Jordan Addison and Ohio State’s Jaxon Smith-Njibga are also electing to head to the NFL as 20-year-old prospects rather than playing their senior seasons. If they address a different need at pick 12, they should also have plenty of options with their early second-rounder.

If the Texans select a WR with any of their first three selections, they will likely be the lead candidate to operate as the No. 1 in the offense – assuming Brandin Cooks gets his wishes on a trade.

Speaking of Cooks, the Texans should find a way to get him to return because the WR free-agency class isn’t terrific in 2023. There aren’t any high-end target earners available, and many of the options profile as possession-type WRs.

Those types of players still have a place, but offenses need weapons that can make defenses pay for allowing short completions to take away deep passes. They also need options capable of the home run when defenses are sucked into the box by personnel, formations and a potent running game. Cooks can do both of these things.

If the Texans can draft a high-end WR and get Cooks to stay, they will have the makings of a solid corps, with Nico Collins and John Metchie vying for time as the third or fourth option. Even if the rookie QB plays below average, we could get two fantasy-viable options out of the Texans' passing game in 2023, and they likely won't carry high ADPs.