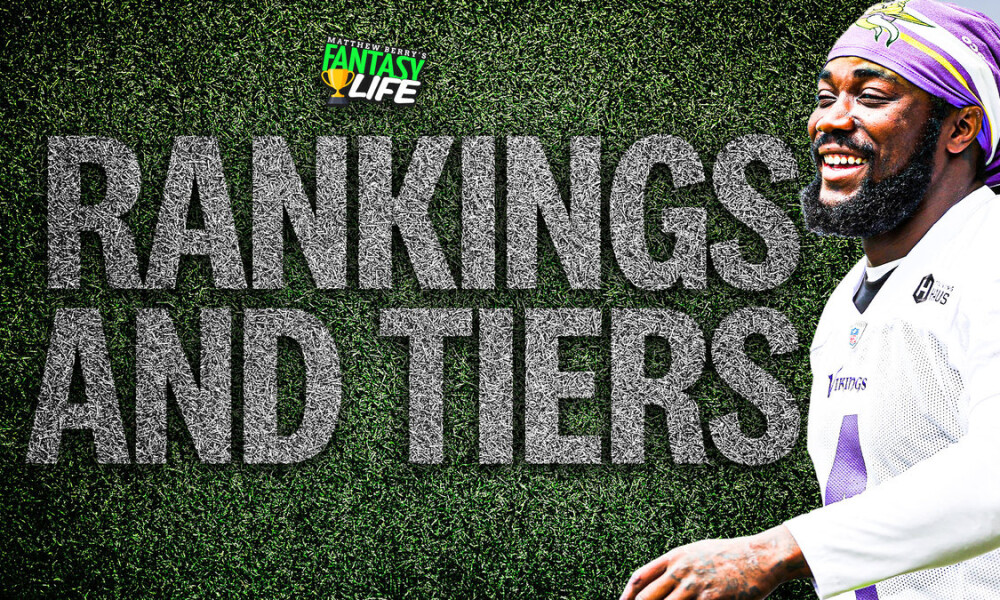 It is time to make those tough lineup decisions for Week 3, and Dwain has you covered with in-depth player tiers, rankings, and analysis.

It's time to make those tough lineup decisions for Week 3, and Dwain has you covered with in-depth player tiers, rankings, and analysis. Here are a few of his favorites for Week 3:

Find all of our positional rankings here.

It is time to make those tough lineup decisions for Week 3 of the fantasy football season.

Below you’ll find positional rankings, player analysis, betting totals, and implied points for every game on the slate.

Allen has the fourth-most regulation passing yards (614) and is tied for the most passing TDs at seven. The Dolphins are without Byron Jones (PUP), and Xavien Howard is questionable due to a groin injury.

Per PFF data, Miami continues to run the second-most man coverage (39%) despite their injuries. They also offer the second-highest zero-coverage rate (11%), which could leave Bills’ receivers in some great one-on-one matchups. The Dolphins have given up the eighth-most passing yards in regulation (531).

The Bills carry the No. 1 implied point total on the slate as six-point favorites but don’t expect them to let up in the passing game. They throw the ball the second-most in the NFL when leading by four or more points (68%).

Hurts faces off against a Commanders secondary that has allowed 531 yards (tied for eighth-most) and five TDs in regulation play. The Eagles’ QB has thrown for the seventh-most yards in regulation (576). He only has one passing touchdown, so there is room for more fantasy points.

Per PFF, no QB handles more designed rush attempts than Hurts (24.6%), and Washington has the fourth-lowest PFF run defense grade (47.3).

This is a good matchup for Hurts on both fronts, and the Commanders have played well enough to provide shootout potential. The Eagles possess a top-five implied point total.

Hurts is a SMASH play in Week 3.

The Bengals have a top-six implied point total in a matchup against a Jets unit with the fourth-worst EPA against the pass. Burrow & Co. have struggled early this season, but this game provides a great opportunity for the entire offense to get back on track.

Stafford matches up against a Cardinals defense that has allowed 594 yards (second-most) and seven TDs (tied for the most) through the air in regulation play. No other defense ranks lower in PFF pass defense (36.9).

The Rams have a top-five implied point total in a contest with the third-best game total. We could see an NFC West shootout.

Stafford is a SMASH play in Week 3.

Herbert (ribs) is questionable for a tilt against the Jaguars. The line has fallen 3.5 points, and the game total is down five points since the beginning of the week over at BetMGM.

The third-year QB is at risk of not playing in the late window and carries the risk of re-injury if he does suit up.

Saturday Update: He moves down to high-end QB2 territory, given the additional risk.

Brady won’t have Mike Evans (suspension), and the rest of his receiving corps is questionable for a matchup against Green Bay. The goat only has 402 yards and two TDs through the air in 2022, and the Packers’ pass defense sports a top-six EPA.

Saturday Update: Brady will be without Mike Evans and Chris Godwin. Russell Gage, Julio Jones, and Breshad Perriman are all questionable. Whoever manages to suit up likely won’t be 100% and could exit the game early.

Look elsewhere in Week 3 Brady drops to the bottom of Tier 5 and is a FADE.

Cook is only averaging 13.8 points per game, but his utilization profile remains top-six.

The Vikings are tied for the No. 1 implied points on the slate in a game at home against the Lions, where they are six-point favorites.

If Minnesota can develop a lead, Cook could be very busy against a team that has allowed the seventh-highest yards (304) and the most TDs (five) on the ground. If they can’t, that’s okay; Cook possesses the fifth-best RB route participation (66%) in the NFL and a 13% target share (top-six).

Things rarely align this well, making Cook an absolute SMASH play as my No. 1 RB in Week 3.

I am four spots ahead of expert consensus on Swift. While opposing RBs don’t correlate well from a fantasy-points perspective, Swift has that receiving profile that can make it work. Only six other backs have higher route participation (62%) than the third-year RB.

He ranks fourth in the NFL with 200 rushing yards in regulation. He is crushing all of the talent-profile metrics you love to see, per PFF:

The Lions have a top-eight implied point total, and the Vikings offer the third-most-favorable EPA against the run.

Swift is a top-five RB option in Week 3.

Williams saw his snap share rise from 58% to 62% in the first two games, and he has been a pleasant surprise in the passing game. He has a 22% target share and is leading the Broncos’ backfield with a 56% route participation.

Given our limited data sample, we can’t be sure that his role is expanding, but if Williams takes over 65% of the work, it will be fun.

Williams profiles as a borderline RB1 in Week 3.

Kamara (ribs) practiced in a limited fashion all week and draws the Panthers, who have allowed the second-most rushing attempts in regulation (72).

Only the Titans and Bears have allowed more regulation rushing yards than Carolina (320).

If Kamara is healthy, he offers high-end RB2 upside this weekend.

Harris only has 74 regulation rushing yards (34th) in two games, and the Steelers are 4.5-point dogs at home against the Browns. Harris is well below the 10.5% NFL average in explosive rush rate with an uninspiring 4%. He is also underperforming league averages in missed tackles forced (0.08) and average yards after contact (2.44)

The Steelers carry the worst implied total on the Week 3 slate, and the Browns only allow 73 rushing yards per game in regulation (fourth-least).

As a result, Harris is a FADE in Week 3.

Saturday Update: Conner (ankle) is questionable after two limited practice sessions. If he can't go, Darrel Williams handled 56% of the snaps after Conner left the game in Week 2, including passing downs. He and Eno Benjamin are low-end RB3s if Conner is out.

The Raiders are using a committee in the backfield, but it isn’t near as bad as we expected under Josh McDaniels. Jacobs isn’t getting much passing-down work (44% of two-minute offense), but he is bogarting 81% of the rushing attempts.

The Raiders are slight favorites on the road against the Titans, who have given up the second-most regulation rushing yards (334).

Saturday Update: Jacobs (illness) didn’t travel with the team to Tennessee and is at risk of missing the game. If he can’t go, we could see Zamir White handle the early-down role with Brandon Bolden and Ameer Abdullah working in on passing downs. None should be trusted unless in deep league.

Kupp is my No. 1 rated player for the weekend. He leads the NFL with 29 targets and draws a matchup against PFF’s worst-graded pass defense in Arizona (36.9). The Cardinals have coughed up 594 yards (second-most) and seven TDs (tied for the most) through the air in regulation play.

The Rams and Cardinals tilt offers a top-three game total, and Los Angeles has a top-five implied point total.

No surprise here; Kupp is once again a SMASH play in Week 3.

Diggs will face off against the man-happy Dolphins secondary that could be without Xavien Howard. Miami has offered up the eighth-most yards (531) through the air in regulation, and Diggs has the second-most yards (370) and four TDs.

The Bills and Dolphins could shoot out in a game tied for the best game total on the slate. No other team carries a higher implied point total than Buffalo.

Diggs is a chalky SMASH play this weekend.

Chase and Higgins draw a matchup with PFF’s fourth-worst graded pass defense in the Jets. Chase ranks No. 9 in regulation receiving yards (183), and Higgins tied for the team target-share lead in Week 2 (27%).

The Bengals have a top-six implied point total, and their two lead WRs are SMASH options in Week 2.

Johnson is dominating the Steelers' passing attack with a 30% target share.

Unfortunately, Pittsburgh is dropping back to pass 32.5 times per game (28th). However, they get a plus matchup against the Browns, who struggled to contain the Jets and Garrett Wilson in Week 2. Cleveland has allowed 563 (fifth-most) regulation passing yards and five TDs (third-most).

The Washington coaching staff is going out of their way to design optimal looks for Samuel.

His targets are coming in a variety of ways, per PFF data:

The Commanders are moving him all over the formation, with 67% of routes coming from the slot and 5% from the backfield.

He has also handled 10% of their rushing attempts.

Samuel is a low-end WR2 as long as the team continues to scheme him up in such beneficial ways as a mismatch utility player.

Robinson (8.8) and Smith-Schuster (9.0) haven’t been able to take advantage of the high-flying offenses they call home. However, both get plus matchups in Week 3, along with large implied point totals, providing them another chance to get things right.

They are mid-range WR3s with a chance to SMASH.

Saturday Update: Allen (hamstring) missed practice on Friday along with several other Chargers, including Justin Herbert. Allen is only a high-end WR3 this week if Herbert plays due to the risk of re-injury to both players.

Jeudy didn’t practice on Wednesday and has one of the tougher matchups on the slate. The 49ers grade as PFF’s No. 1 coverage unit (82.9) in 2022, but they haven’t faced much competition from the Bears and Seahawks.

Vegas doesn’t expect big fireworks (44.5 game total) in a matchup where both offenses could look to slow things down and play keep-away.

Saturday Update: Jeudy (shoulder/ribs) missed practice Thursday and got in some light work on Friday. If he can’t play against the 49ers, Courtland Sutton moves into the top-10.

Jeudy gets a slight downgrade thanks to his injury and questionable matchup in Week 3.

Saturday Update: Waller moves into Tier 1 alongside Travis Kelce and Mark Andrews with Hunter Renfrow (concussion) ruled out. We could see 50 to 60% of the targets funnel towards Waller and Davante Adams this weekend against the Titans, who have allowed 505 yards and six touchdowns passing in regulation pay.

He gets help from the Seahawks, who rank last in EPA versus the pass, per PFF data.

The second-year tight end remains a high-end TE1 for Week 2.

Saturday Update: Kittle (groin) was removed from the injury report for the 49ers' Week 3 matchup against the Broncos. He climbs inside my top-six.

Deebo Samuel and Brandon Aiyuk will challenge for targets, but we should see a slight boost in pass attempts with fewer Trey Lance scrambles (11%) and designed-rush attempts (15%).

After an encouraging 74% route participation in Week 1, the Broncos went back to a three-way rotation at tight end in Week 2.

Okwuegbunam faces off against a 49ers unit with the second-best PFF coverage grade, making him a tough name to click on when making lineups.

Consider Okwuegbunam a FADE in Week 3.