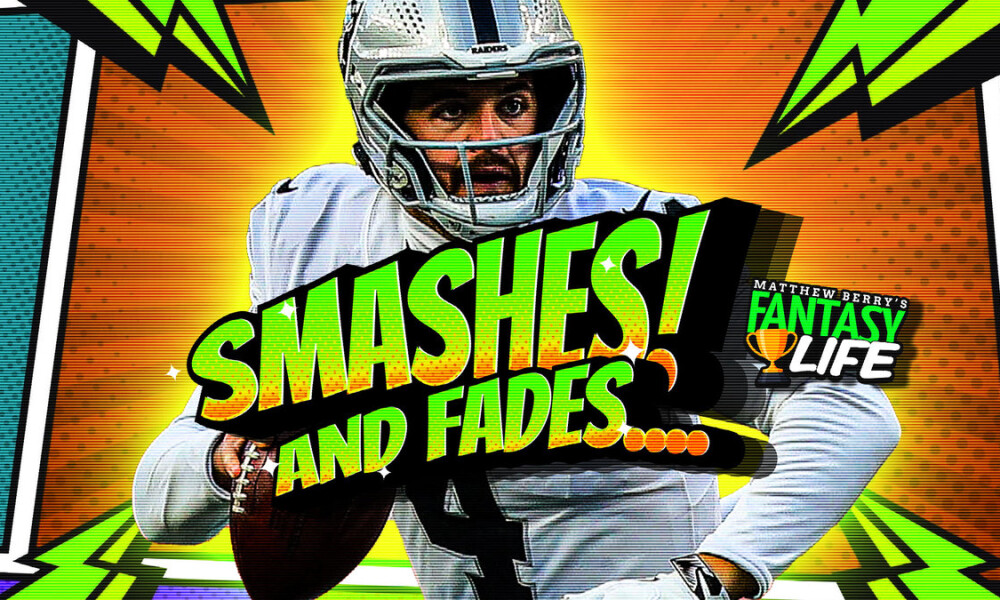 Each week a handful of players stick out based on factors like game totals, implied points, utilization, and positional matchups.

Each week a handful of players stick out based on factors like game totals, implied points, utilization, and positional matchups. Smashes are players where those factors align optimally. Fades are the opposite.

Often, these players climb or sink the most versus their normal standing in my weekly rankings.

Carr draws the No. 2 game total and implied points on this slate against a Cardinals defense that got smoked by Patrick Mahomes for 360 yards and five touchdowns passing.

No, Carr isn’t Patrick Mahomes, but Carr has three quality offensive targets, and the game script looks ripe for a blowup game. Early in 2021, before his receiving corps was decimated, he eclipsed 325 passing yards in four of the first six games. He threw two TDs in five of those contests.

Not many opponents can say they have Brady’s number over the last two seasons, but the Saints have been a difficult matchup for TB12 since joining the Buccaneers.

Tampa Bay is also incredibly banged up at wide receiver heading into Week 2:

This all adds up to a FADE recommendation in Week 2 for Brady.

Barkley is my No. 1 ranked skill position player for Week 2.

His Week 1 Utilization was LEGENDARY, and now he draws a matchup against the Panthers, who allowed 217 rushing yards to the Browns. He was one of only three backs to eclipse 80% of snaps with a 70% route participation.

The game doesn’t offer a high game total (43.5), but the point spread indicates a tight game where Barkley should be highly involved.

The RB that many were able to draft in Round 2 or 3 of fantasy drafts ascended to SMASH status in only one week of play. Yes, we love explosive pass-catching backs.

Mixon and the Bengals are 7.5-point favorites – the fourth-highest spread on the slate – which could lead to additional opportunities on the ground for the Bengals. In Week 1, no other RB accounted for more of their team’s rushing attempts (93%).

That pairs well with a matchup against the Cowboys, who were pushed around up front against the Buccaneers. Leonard Fournette & Co. totaled 152 yards on the ground in a game script that could look similar to Mixon’s.

If Dallas somehow makes the game competitive, Mixon picked up the two-minute offense last weekend – a development that could help protect him in pass-heavy game scripts. Against the Steelers, he totaled 21.5 PPR points despite the Bengals trailing by four or more points on 81% of plays.

Fire Mixon up with extreme confidence as a SMASH play this weekend.

Last Sunday, the Eagles ripped the Lions for 216 yards on the ground (126 to RBs). In a three-way backfield (plus a rushing QB), Miles Sanders posted 18.5 PPR points. The Commanders offensive line isn’t in the same league as the Eagles, but Gibson’s role is more extensive than Sanders, and he should see plenty of early-down opportunities.

J.D. McKissic remains the lead long-down-distance and two-minute back, but the Commanders opted to throw the ball more on all downs in Week 1. They led by four or more points on 56% of snaps but stayed true to the passing game in those situations, throwing the ball 12 percentage points above the NFL average. Gibson should see plenty of opportunities in the passing game.

The matchup surprisingly offers the fourth-highest game total on the slate, and Vegas expects a competitive game (2.5 spread).

The Bengals only allowed 30 yards on the ground to the Steelers RBs last weekend, including overtime. Elliot managed 52 yards on 11 carries against Tampa Bay, but Dallas had to abandon the run in a trailing game script – which could be the case again as 7.5 dogs.

Without Dak Prescott, the Cowboys carry the third-lowest implied points on the slate, and Tony Pollard is the better passing-down option.

It is tough to see a scenario where the Cowboys can effectively feed Zeke in Week 2, making him an easy fade in all formats.

St. Brown has seven consecutive games with a 30% target share or higher. The Lions provide the No. 5 implied points against the Commanders in a game with the fourth-highest game total.

The second-year WR is my WR10 this weekend and is an absolute SMASH play.

Brown and the Cardinals draw the second-highest game total (51.5) against the Raiders in another AFC/NFC West clash.

In Week 1, the Raiders gave up 271 yards and three TDs to the Chargers. According to PFF, Brown has the No. 2 WR/CB matchup on the slate, and we could see a target share funnel with Rondale Moore and Zach Ertz questionable for the contest.

Brown didn’t come through in a similar situation in Week 1, but he was on the field for 96% of pass plays and accounted for 45% of the Cardinals’ air yards on a 19% target share. Hollywood also led the way with 67% of the endzone targets.

We could easily see a 10-target weekend resulting in 100-plus yards and a TD or two.

Honestly, I never want to fade Moore – he is a fantastic player. However, the purpose of this column is to follow the data, and Moore has the worst WR/CB matchup per PFF.

If Cleveland gets their way, they will seek to control the clock with their running game, limiting opportunities for Moore.

Moore is still fine as a contrarian option in DFS thanks to his talent profile, but he should be the odd-man out in season-long lineup decisions in many cases this weekend.

Adams bogarted 45% of Derek Carr’s targets in Week 1, but Waller still managed an 18% target share. Adams won’t see an astronomical share every week, and this offense is condensed around three players: Adams, Waller, and Hunter Renfrow. That means his 18% could quickly transform into 25% when Adams is just good, not great.

The Cardinals gave up 78 yards to the Chargers’ TEs in Week 1. The matchup offers the second-most-favorable implied points on the slates. Look for Waller to get right in Week 2.