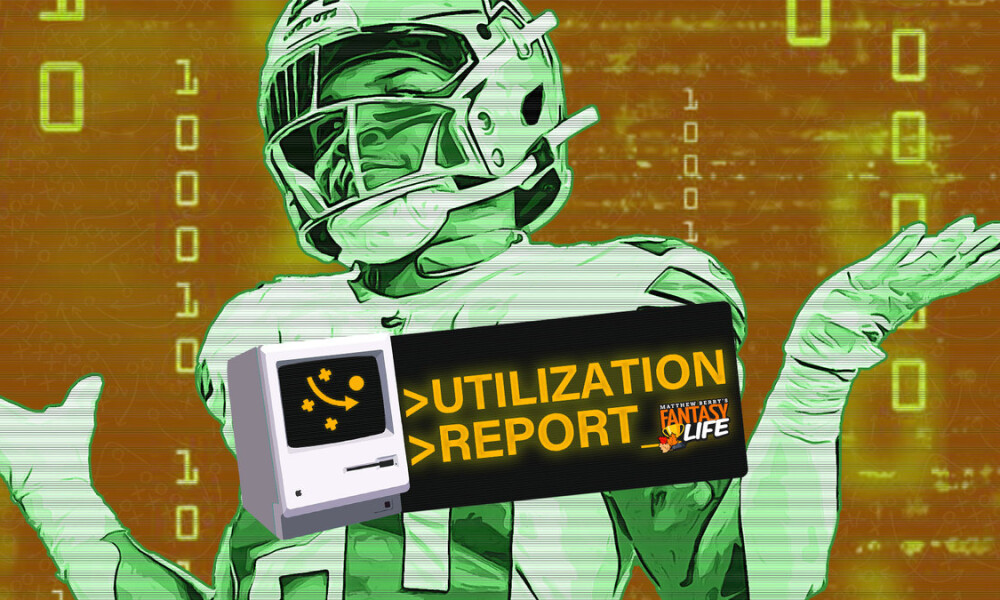 The Utilization Report. Everything you need for Fantasy Football in Week 12

To make the waiver wire section of this column, a player must be rostered less than 50% of the time in typical leagues like Yahoo! or ESPN. If players are trending upwards in utilization or performance and are over that threshold, they will be found under the upgrade or buy-low section.

Burks delivered eight receptions for 111 yards on eight targets in his second game back from IR. While he is battling with Nick Westbrook-Ikhine for routes (68%), the rookie demanded a target a whopping 38% of the time he was in a route. In six games, the rookie has three superstar-level TPRR performances.

It is hard to see Westbrook-Ikhine – a 10% TPRR player – holding off the rookie from a full-time role for much longer. Burks also leads the Titans in yards per route run (2.08) and is building a solid rapport with Ryan Tannehill, who looked for Burks a team-high 33% of the time on third or fourth down in Week 11.

Some might talk themselves out of Burks due to the run-heavy nature of the Titans’ offense. However, that sort of thinking would have caused us to miss on A.J. Brown as a rookie. Talent is the No. 1 factor for WRs, and the best way to understand talent is the ability to demand targets.

The first-round NFL draft pick leads the Titans in TPRR (23%) and doesn’t have much competition for targets. Burks could be an absolute league smasher down the stretch and should be the No. 1 priority on most waiver wires. He is available in 79% of Yahoo! Leagues.

Slayton doesn’t have the historical profile we want when considering veteran WRs off the waiver wire. He has never eclipsed the 17% TPRR threshold in a season. Because of this, he hasn’t made it into the Utilization Report free agent pool.

However, he has performed admirably since taking over a substantial role starting in Week 5. The fourth-year WR has four top-24 performances and only one dud (WR74) in his last six games. In that span, he has a respectable 22% target share and a WR1-worthy 2.48 YPRR.

With Wan’Dale Robinson (knee) out for the season, the competition for targets in the Giants offense is meager. Last weekend, Slayton posted a season-high 87% route participation and 48% in slot routes.

The Giants want to win via ball control and minimizing mistakes, but Slayton could come through as a solid WR3 with sneaky upside if New York gives him a full-time role and schemes up more easy looks. Slayton is available in half of Yahoo! Leagues.

Melvin Gordon III was released on Monday, and Chase Edmonds has a high-ankle sprain. That leaves Murray and Marlon Mack as the last two RBs standing in Denver.

The nine-year veteran could be in for a significant utilization bump. However, what type of production we will see is unknown. The Broncos’ offense ranks 32nd in TD drives (11%), and Murray has been inefficient, averaging 3.6 yards per carry. His 2.20 yards after contact is over a half-yard below the three-year NFL average of 2.93.

Murray is a low-end RB2 moving forward and is available in 74% of Yahoo! Leagues.

Williams was designated to return from the PUP on Monday, opening the door for him to return in the next three weeks. The first-round selection is recovering from an ACL injury he suffered in the national championship game.

The Lions could take it slow with Williams, but the rookie makes a great stash play for the final weeks of the fantasy playoffs. He has the pedigree and high-end playmaking upside we covet. The Lions are on a three-game winning streak and could push for a Wild Card berth if they can keep it up.

Williams is available in 78% of leagues and will be an upside WR3 when he returns.

Pierce posted his second-highest route participation rate of the season (89%) and led the team with eight targets (27%) against the Eagles.

The rookie was showing promise early in the season before the Sam Ehlinger experiment. Pierce is available in most leagues, and with Matt Ryan back under center, he could surprise down the stretch.

Chark returned from IR in Week 11 and posted a 19% route participation. The Lions are taking it slow, but the plan might have been for a light workload, given the quick turnaround against the Bills on Thanksgiving.

The former second-round NFL draft pick has big-play upside (19.1 aDOT), and the Lions' offense needs more playmakers with T.J. Hockenson gone and D’Andre Swift in the doghouse. He doesn’t have the same talent profile as Jameson Williams, but he could still be a constant in three-wide receiver sets for the rest of the season.

Jackson hasn't had a top-eight finish since Week 3. The Ravens’ receiving corps is decimated thanks to a Rashod Bateman injury and the loss of Marquise Brown via offseason trade, and Jackson has a career-low YPA (6.8).

However, he ranks second in designed-rushing attempts (26%) and ninth in scramble rate (6%) – which is a difficult combination to hold down for long in fantasy terms. The fifth-year QB averages 9.6 rushing attempts per game, putting him on pace for 163 total.

Remember how bad Justin Fields looked over the first month of the season? He had finishes of QB23, QB28, QB32, and QB25 before catching fire to post QB12, QB9, QB5, QB5, QB1, QB1, and QB7 performances. He hasn’t thrown for over 200 yards in six of those games – most of the value comes from his legs.

Unless we suddenly believe running QBs aren’t a cheat code or Jackson doesn’t have elite upside as a rusher, we should be buyers. He could win fantasy championships if he gets hot.

Prescott has three consecutive top-10 finishes. The Cowboys aren’t throwing as often, but they are winning with efficiency. The veteran QB has two-plus TDs and at least 250 yards in the last three contests.

Passing yardage and TDs are down across the NFL. Over the last three seasons, teams averaged 250 yards and 1.6 TDs per game. This year, it is down to 237 and 1.4.

That makes Prescott’s numbers suddenly strong in comparison to his peers.

Ezekiel Elliott returned to the lineup in Week 11 against the Vikings, which returned the Cowboys backfield to a rotation. However, an important development occurred, with Pollard posting a 59% route participation and gobbling up 100% of the two-minute offense.

The fourth-year RB has demonstrated a high-end receiving profile in the past, and it is showing up again this year with the fifth-best YPRR (1.71) of RBs with at least 100 routes.

Pollard and Elliott split the rushing workload evenly, including the work inside the five yard line. Elliott could regain the lead in those two areas as his knee gets stronger, but Pollard has outperformed Zeke in every efficiency metric.

Jerry Jones has remained steadfast in his belief that Dallas is a better team with Elliott playing, but the door has opened for Pollard.

If the fourth-year RB can hang onto 35-40% of the rushing attempts and 60-65% of the passing downs, he has RB1 potential the rest of the way in a surging Cowboys’ attack.

Pollard is a mid-range RB2 with upside moving forward.

Clyde Edwards-Helaire suffered a high-ankle sprain, opening the door for Pacheco to bogart most of the rushing attempts (63%) for a second-straight game.

The Chiefs are a pass-first offense, and Jerick McKinnon will handle most of the passing-down opportunities, but this is the No. 1 scoring offense in the NFL. That means the rookie RB has two-TD upside in any given game.

Pacheco is an upside RB2 while Edwards-Helaire recovers.

With Dallas Goedert out of action, the Eagles condensed their passing attack around Brown (30%) and Smith (39%).

The two WRs have already shown an ability to demand targets with 28% and 25% target shares on the season, so we could see Philadelphia continue to channel 60%-plus of their targets through the duo until Goedert returns – similar to how the Dolphins handle their passing attack.

Hockenson came up small in the Week 11 box score thanks to a terrible day for the offense, but he had another stellar utilization outing with a 29% target share. Kirk Cousins looked to his new tight end on 100% of end zone targets and 67% of third and fourth-down opportunities.

Over his first three games in Minnesota, the former first-round TE has a gaudy 83% route participation and 26% target share. He has surpassed a fading Adam Thielen as the clear No. 2 option in a pass-first attack seeking a division title.

Hockenson is challenging for the No. 3 TE spot behind Travis Kelce and Mark Andrews. He is a mid-range TE1 with high-end TE1 potential the rest of the way.

Higbee started the 2022 campaign on fire, with three top-eight finishes in the first five games.

Unfortunately, the Rams' offensive line woes put an end to that starting in Week 6 as the veteran TE was asked to pass block more often. Although his TPRR remained great, the change in role created a four-game stretch where he posted TE50, TE35, TE55, and TE5 finishes.

With Cooper Kupp out of the lineup in Week 11, the Rams threw caution to the wind, cutting Higbee loose for an 89% route participation – his second-highest of the season. Of course, a top-10 finish followed, and he now has eight targets in back-to-back weeks.

The Rams don’t have much target competition, creating an opportunity for Higbee to reestablish himself as a mid-range TE1.