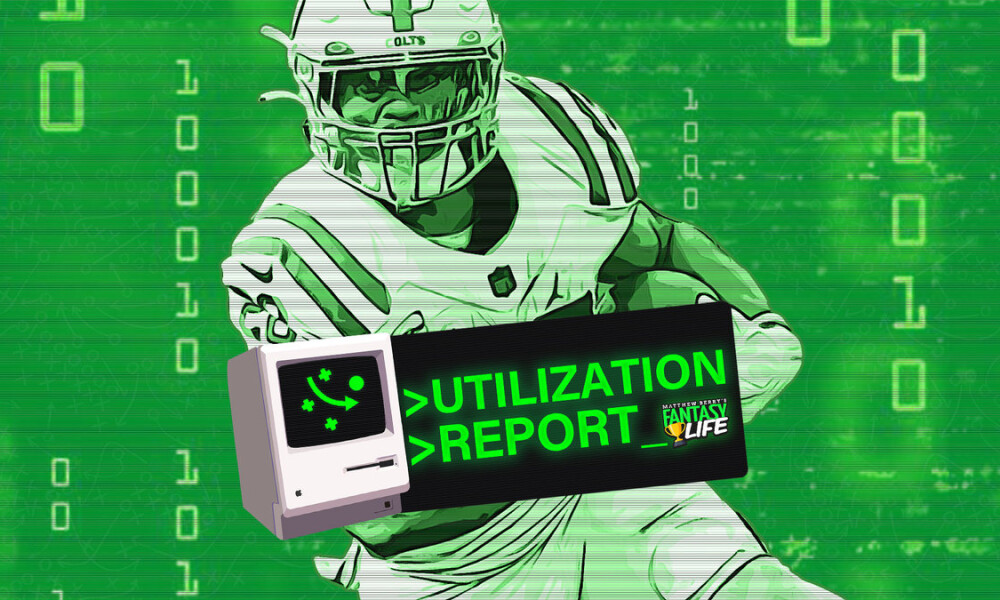 The Utilization Report. Everything you need for Fantasy Football in Week 11

To make the waiver wire section of this column, a player must be rostered less than 50% of the time in typical leagues like Yahoo! or ESPN. If players are trending upwards in utilization or performance and are over that threshold, they will be found under the upgrade or buy-low section.

Watson had only played on 17% of the Packers’ passing plays coming into Week 10, battling a litany of injuries that started with a knee injury that landed him on the PUP in camp.

However, in Week 10, the No. 34 selection from the NFL Draft saw his first full-time duty with an 84% route participation that paid off with a whopping 42% target share. Watson bogarted 74% of the air yards and 100% of the end zone targets on his way to 32.7 fantasy points.

Some will argue that Watson only succeeded due to Romeo Doubs’ injury and can’t repeat this performance. Both statements are factual, and you shouldn’t care – because things change quickly in the NFL. Like Doubs received his chance with Watson hurt in camp, Watson has demonstrated the big-play skillset the offense has been missing.

Rarely do we have the opportunity to add a player with so many things aligning perfectly in Week 11 of a fantasy season:

Watson is available in 92% of Yahoo! Leagues, and you cannot be shy. The bidding will be intensified this week. The game was in a late afternoon slate with everyone watching, and Cooper Kupp is headed to IR. Do not be shy about Watson, make a big bet to win your league.

If you don’t have a top-six QB option, Watson is the only option available on waivers that could provide you with the firepower to offset the top tier.

He won’t play until Week 13, but fantasy managers have been slowly adding him over the last two waiver periods. He is still available in 63% of Yahoo! Leagues, but this is your last chance.

The drumbeat around Pacheco has been building since Andy Reid named him the starter before the bye week. Since then, he has received more rushing attempts than Clyde Edwards-Helaire in every game, but the splits were still close.

That all changed in Week 10, with Pacheco taking control of 73% of attempts, which led to 16 rushing attempts for 82 yards.

Edwards-Helaire didn’t receive a carry and only played 6% of snaps, and Jerick McKinnon remained the lead option on passing downs.

The Chiefs are a pass-heavy operation, which limits Pacheco’s volume upside. However, he can easily offset that by playing in an offense that runs the seventh-most plays per game and leads the NFL in converting drives to TDs (37%). The rookie has weekly two-TD upside.

He has moved into high-end RB3 territory because we only have one data point. However, we don’t always have the luxury of waiting – that often means missing out, and we are too late in the season to wait.

Pacheco could be the equivalent of Dameon Pierce playing on an elite offense – treat him like a high-upside RB2 when considering your FAB allocation. He is available in 76% of leagues. Get the chips in the middle, y’all.

Burks returned from the IR in Week 10 and posted a 75% route participation and 18% target share. He didn’t come up big in the box score with only 5.4 fantasy points, but the first-round NFL draft pick could get things going down the stretch for many of the same reasons as Christian Watson:

The Titans are a run-first team, which is the first argument the naysayers will throw out, but again we must zoom out and see the big picture. How many players remaining on waivers have a first-round talent profile like Burks and a reasonable path to targets? The list is very short.

Burks will need to win on efficiency, but he has the skill set to create huge plays after the catch off of play action. The Titans' offense is centered around big plays and efficiency in the passing game, and the rookie is the best option to fulfill that need.

Burks won’t take as much FAB because he hasn’t done it yet, but don’t underbid him. If you have him as your backup bid to Christian Watson, you can consider upping the percentage versus what I have below.

Campbell was released in most leagues over the past two games, with Sam Ehlinger deflating the entire offense of the Colts. Enter Jeff Saturday, who made a move to go back to Matt Ryan in Week 11.

Over the last three games with Matt Ryan, Campbell has looked more like the athlete Indianapolis selected out of Ohio State in the second round of the 2019 NFL Draft.

Over the three-game span, Campbell has 29 targets (25%), 24 receptions, 203 yards, and three receiving TDs – leading to 20.8 fantasy points per game. With Nyheim Hines gone, the slot WR (78%) is the lead underneath option (5.2 aDOT) for the Colts' offense and is seeing career-high route participation at 89% for the season.

Campbell is available in 82% of leagues and could be a key ingredient to your championship run.

Zach Ertz is out for the season due to a knee injury, which puts McBride in line for a huge opportunity. In Week 10, the second-round pick registered a 76% route participation.

He didn’t come through in the target department (3%), but that could change quickly. Many regarded McBride as the top pass-catching TE threat in the draft and the Cardinals agreed by making him the first TE off the board by a full round.

Mostert came through in the box score with 18.8 fantasy points, but his utilization took a dramatic downturn. He was limited to 28% of snaps, 24% of rushing attempts, and 25% route participation – all his lowest marks since Week 1.

We have seen Mike McDaniel make a switch at RB twice this season, so there is no guarantee things don’t swing back to the veteran at some point. However, for right now, Jeff Wilson Jr. appears to be the flavor of choice.

Mostert will be tempting after the bye week with a juicy matchup against Detroit, but fantasy managers will need to be realistic about expectations. You are betting on a TD if you are starting him in fantasy.

Freiermuth posted a 27% target share in the first game without Chase Claypool. The second-year TE has missed some time with injury, but his 23% TPRR is in top-three territory versus historical rates.

He is a talented young player in an offense that ranks seventh in close-game pass rate in non-overtime play.

Freiermuth has all the necessary ingredients for a strong finish and is a mid-range TE1 moving forward.

Taylor returned to the lineup and delivered 147 yards and a TD on 22 rushing attempts, and added two receptions for 25 yards and a TD.

Yet, the bigger news is his takeover of all the passing-down work, with 100% of the LDD and two-minute snaps with Nyheim Hines traded to the Bills.

This development does two crucial things for Taylor’s fantasy outlook:

Deon Jackson missed Week 10 but shouldn’t be much of a threat to Taylor upon his return. Jackson was a practice squad player and rates miles behind Taylor (even the injured version) in every efficiency metric.

Hines was an elite passing-down option that was better than Taylor for that specific task. Jackson isn’t superior to Taylor in any facet – he will help keep the superstar fresh, but this won’t be a timeshare.

Taylor is back in the high-end RB1 conversation and has RB1 overall potential in his new role.

Conner took over the Cardinals’ backfield in Week 10, and Eno Benjamin was released on Monday.

The sixth-year RB bogarted 96% of the snaps, 81% of rushing attempts, and posted a hearty 60% route participation. Between rushes and targets, he tallied 24 opportunities, doubling his efforts from Week 9.

Arizona’s offense hasn’t lived up to expectations, but they are an average unit, which is good enough to support more outings like the one against the Rams for 23.6 points if this utilization sticks.

Conner is a high-end RB2 that will move into the RB1 conversation next week if his role holds.

Wilson Jr. jumped to the top of the Dolphins’ pecking order in his second game with a 61% snap share, and led the way in attempts (52%) and route participation (53%).

The recently-acquired veteran also took more of the short-yardage and LDD snaps, while Raheem Mostert slightly edged him out in the two-minute offense. Wilson finished the day with 17 rushing attempts and five targets – a solid number in a high-powered offense.

The North Texas University product (Go Mean Green!!!) moves into low-end-RB2 territory and will climb again next week with another strong utilization performance.

McCaffrey saw a utilization reduction with Elijah Mitchell’s return to the lineup.

Mitchell handled 45% of the rushing attempts over the first three quarters and took over in the fourth quarter as the closer (69%). McCaffrey retained the passing downs, posting a pristine 73% route participation along with a 21% target share.

Kyle Shanahan also continues to show a steadfast commitment to the ground game despite all of his passing game weapons. The 49ers trailed by four-plus points on 56% of snaps in Week 10, yet they opted to run the ball on 58% of plays. The league average is 31%.

That type of commitment could keep Mitchell more involved than fantasy managers want, regardless of the game script. Of course, Shanahan could flip the script on us next week and leave Mitchell out of the game plan – he is a hard coach to predict.

If this utilization sticks, McCaffrey’s profile is similar to early-career Alvin Kamara and Austin Ekeler before they took over lead-rushing roles. That is still great and enough that CMC could finish as the No. 1 RB in fantasy.

However, this development dampens the league-crushing upside that put him on a pedestal.

McCaffrey is a mid-range RB1 with upside moving forward, but is no longer the instant RB1 choice on every slate.

In Patterson’s second game back from IR, the backfield remained entrenched in a three-way committee. The veteran registered a season-low 21% rush share and remained limited in the passing attack with a 36% route participation.

The elusive playmaker could still come through on efficiency and the run-heavy nature of the Falcons' attack, but it looks like Tyler Allgeier and Caleb Huntley will remain involved.

Patterson falls from RB2 territory to a high-end RB3 option.