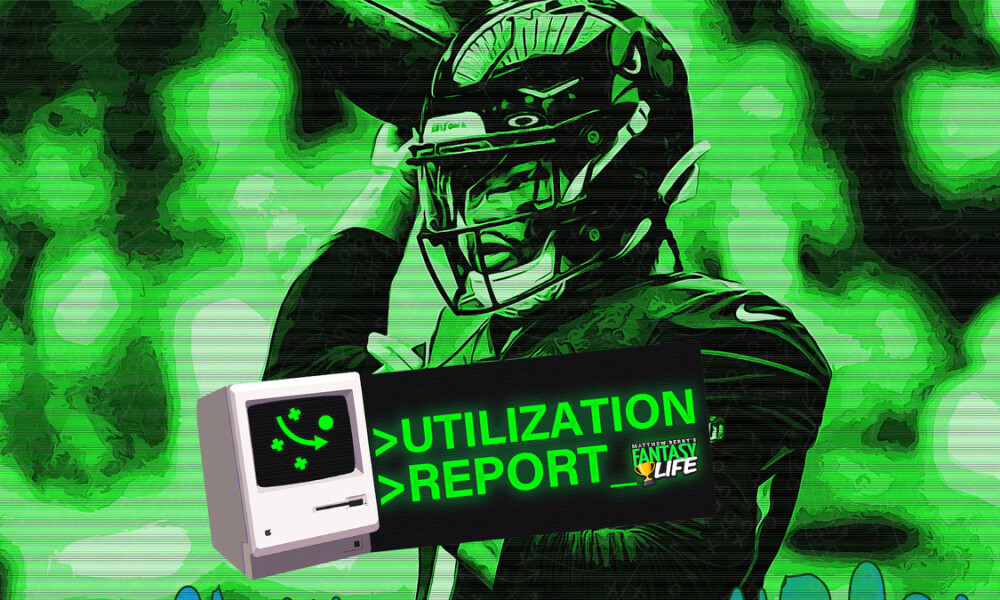 The Utilization Report. Everything you need for Fantasy Football in Week 3.

Volume is king in fantasy football and sports betting, and this report will help you understand which players are due more or less according to their roles. It is a great way to know who is overperforming (sell high) and underperforming (buy low) based on historical data tied to metrics we know drive volume.

For this season, Fantasy Life has partnered with PFF to collaborate on the Utilization Report. Unlock all the data tables and team-by-team analysis on PFF.

Mostert took over the early-down work for the Dolphins offense in Week 2, handling 61% of rushing attempts. Chase Edmonds remained the primary passing-down back but was out-snapped 55% to 51%.

Miami’s backfield could be maddening to figure out each week, but Mostert has big-play ability, and the Dolphins’ offensive arrow is pointed up. If the backfield tipped to one player, it would create a high-end RB2 scenario.

Mostert is available in roughly half of leagues and should be rostered.

Williams makes this list for the second consecutive week. He is the primary backup to D’Andre Swift and would carry high-end RB2 upside should he find himself the starter. Williams also brings some stand-alone as the No. 1 option inside the five-yard line, where he has 100% of the totes on the season.

The Lions’ offense is starting to form, and Williams is in a similar situation to James Conner at the beginning of 2021 – a quality touchdown-dependent back with significant contingent upside. He is available in over half of leagues.

Robinson took part in agility drills last week and has a shot at returning as soon as Week 5. Antonio Gibson has played well enough to make this a three-way committee once Robinson is ready, but the Commanders’ offense is scoring points, and a lot can happen health-wise in an NFL season.

Robinson could carve out a role as the short-down-distance option to create some immediate value in larger formats.

remains the clear-cut handcuff to Dalvin Cook, who has a history of missing time. The Vikings’ offense stumbled on Monday Night Football, but they have plenty of weapons and an offensive-minded head coach.

This team will get things back on track, and Mattison becomes a high-end RB2 if Cook suffers an injury. He is rostered in less than half of fantasy leagues.

Gallup has a chance of returning in Week 3 and is available in over half of leagues. He could start slow, and the Cowboys are without Dak Prescott, but there aren’t many receiver options on the wire. Gallup should be in the WR3 conversation by the time we see Prescott back on the field.

Robinson has bogarted 59% of the Jaguars’ rushing attempts in the first two games and has two top-12 finishes. However, he continues to leave the field in most passing-down situations, making him a game-script/touchdown-dependent option on an offense that could face more trailing scripts in the future.

Robinson isn’t someone to give away, but if someone is blinded by Week 1 and Week 2 finishes, see if you can sell high. His utilization profile is still that of a high-end RB3.

Cooper erupted with a 37% target share and 25.1 fantasy points in Week 2. Cooper has shown an ability to post these sorts of games in the past, but historically he has never been able to get over the 20-21% target share hurdle.

The Browns are quarterback challenged and want to run the ball as often as possible, creating a scenario where it is tough to see Cooper being more than a low-end to mid-range WR3. This is a great time to move Cooper if someone needs a WR.

I don’t remember a buy-low segment this juicy in my three years writing this column.

Cook handled 80% of the backfield snaps and registered a 73% route participation before the final drive of Monday night when the game was out of hand.

Cook is one of the few backs that possesses a high-end RB1 utilization profile. However, he now has RB20 and RB38 finishes, which could frustrate your local Cook manager. Now is the time to swoop in and buy low on Cook, who has big days ahead.

Lamb has 26% and 34% target shares in his first two games. Some doubted Lamb could demand that type of target share, but he is off to a hot start.

If Lamb can stay in that range, he will be a high-end WR1 once Dak Prescott returns. Michael Gallup will demand some looks but profiles as a secondary or tertiary option from a talent perspective, and the Cowboys are willing to pump up the play volume when healthy.

Moore has gotten off to a rough start with two finishes outside the top-48 receivers. However, he leads the team with a 91% route participation and possesses a high-end talent profile.

As a rookie, he rattled off six top-36 finishes – including three top-10 marks – over seven weeks. His 1.75 YPRR mirrored Jaylen Waddle, and he just missed the 75.0-plus PFF receiving grade. Pounce now.

McLaurin has underperformed with WR29 and WR38 finishes in the first two games. However, the fourth-year WR has adjusted target shares of 22%, 23%, and 23% over his first three seasons.

He has more target competition than ever, but those results are still in reach, and that is also the profile that could still take a big step forward. Big days will come soon for McLaurin in the new pass-happy Commanders offense.

Pitts isn’t performing up to his lofty ADP, but his 91% route participation is a step in the right direction.

Kirk was expected to lead the Jaguars in targets this season, but he and Trevor Lawrence are simpatico. Kirk has WR19 and WR7 finishes to start the season, and his utilization looks strong, with a 24% target share. The Jaguars are protecting him in the slot (84%), and defenses are struggling to contain the playmaker.

The Falcons’ offense is a run-first attack which is the only thing keeping London from a move to top-24 status. However, if he registers another monster target share like Week 2 (46%), he will join that group soon. For now, he is a must-start WR3 in most formats.

The Jets might prefer Corey Davis as a blocker in heavy personnel groupings, but the Jets are best served to operate from three-wide receiver sets. Wilson could crest 80% route participation with fewer routes from Braxton Berrios.

Wilson is only available in 30% of ESPN leagues, but that number should be 0% unless your team is stacked. He is an upside WR3 moving forward.

Olave barely missed a massive day in the fantasy box score in Week 2. He led in targets (33%) and air yards with a mind-numbing 320 yards (63%). He was on the field for more routes (84%) than Jarvis Landry and was Winston’s favorite target on third downs (56%).

Landry and Thomas will challenge for targets, but Olave looks like the primary deep threat and carries upside as a high-end WR4 moving forward.

Mooney is the WR126 after two weeks of fantasy football. The Bears’ offense has dealt with some inclement weather to start the season, but 20 dropbacks per game are still absolutely horrifying in any conditions. This team doesn’t seem to want to throw the ball. Even when trailing by four or more points, they opt to pass 24 percentage points below (46%) the average NFL team. Mooney is a low-end WR4 the rest of the way.

Etienne isn’t involved much in the running game (21% of attempts) but is the lead option on passing downs. Unfortunately, his role mirrors Nyheim Hines more than a player like Alvin Kamara, making him a downgrade this week.

He depends on trailing game scripts to give him a chance, and that isn’t coming to fruition right now in Jacksonville. Etienne is a low-end RB3 moving forward.

For the full Utilization Report, with all data and charts, sign up for PFF+