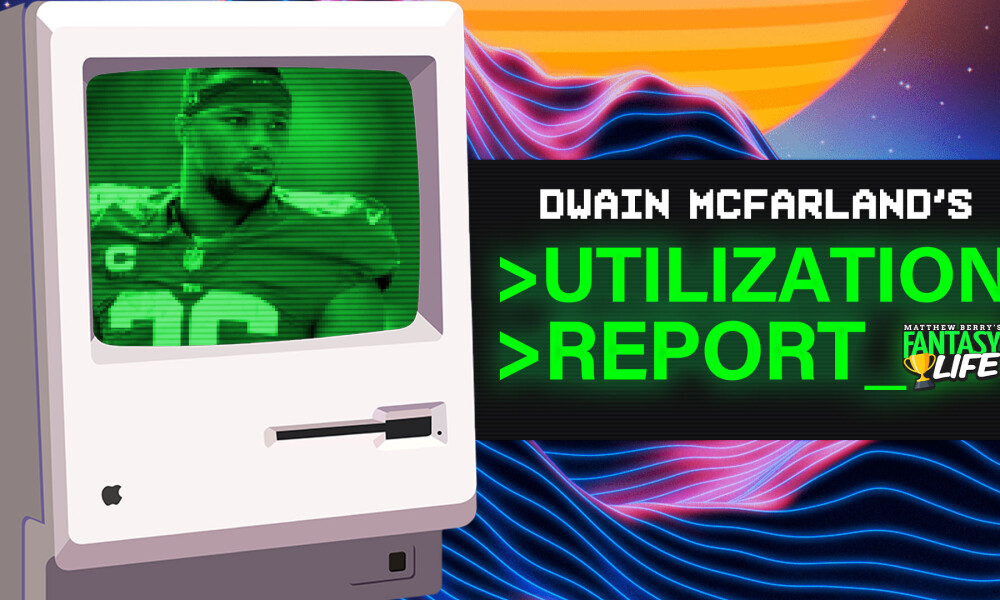 The Utilization Report. Everything you need for Fantasy Football in Week 2.

Volume is king in fantasy football and sports betting, and this report will help you understand which players are due more or less according to their roles. It is a great way to know who is overperforming (sell high) and underperforming (buy low) based on historical data tied to metrics we know drive volume.

QB – Carson Wentz is surrounded by explosive playmakers, and the Commanders could be a pass-first offense in 2022. Scott Turner dialed up a pass on 70% of plays with the score within three points, which was 10 percentage points above the NFL average.

When Washington led by four or more, they continued to jam the accelerator, throwing the ball on 63% of plays (+12%). The former first-rounder is a high-end QB2 with upside heading into Week 2.

QB – Justin Fields got involved in the designed rushing attack with 21% of the Bears’ attempts in Week 1. The second-year quarterback was also active as a scrambler (17%), which makes him a prime breakout candidate despite his lackluster QB21 performance in Week 1. Since 2015, 14 of 16 quarterbacks to eclipse a 15% designed-rush share have finished as a top-10 option or higher.

RB – Jeff Wilson Jr. handled all the running back duties after Elijah Mitchell left the game with a knee injury. Mitchell (MCL) could miss the next eight games, opening the door for Wilson to serve as a high-end RB3.

WR – Julio Jones tied Mike Evans for the highest route participation (76%) on the Buccaneers and was second in target share (19%). With Chris Godwin likely to miss multiple games due to a hamstring, the door is open for the veteran to establish himself as a critical component of Tom Brady’s attack. At a minimum, Jones is a mid-range WR2 while Godwin is out.

WR – Curtis Samuel dominated with a 26% target share on his way to 21.2 fantasy points. He moved all over the field and got involved on the ground with a 16% rush share. The former Buckeye was a big-ticket free agent in 2021 after he popped in multiple breakout metrics in 2019 and 2020.

With the Commanders looking like a pass-heavy attack this season, the arrow is pointing up for the explosive receiver. He is available in 90% of ESPN leagues.

WR – Robbie Anderson led the Panthers with a 32% target share in Week 1. Mayfield was willing to target him downfield (21.2 ADOT) as the veteran receiver gobbled 53% of Carolina’s air yards. Anderson has two top-20 PPR finishes in the last five seasons, so we know he is capable.

He is available in over 60% of ESPN leagues.

WR – Gabriel Davis’ most-likely path to fantasy relevance in 2022 was higher route participation, and he reached an eye-popping 100% in Week 1.

Even if he doesn’t take a step forward in target share, he can payoff ADP in the Bills’ pass-happy offense. However, if someone in your league values him as a WR1, don’t be afraid to make a deal – especially in dynasty formats.

RB – Antonio Gibson delivered in a big way in Week 1 with a top-10 finish at running back. The Commanders faced the fourth-least LDD situations in Week 1, which meant more snaps and routes for Gibson.

McKissic still gobbled up all of the LDD and two-minute work, so we won’t see route participation over 50% every week. Brian Robinson could return as soon as Week 5, making Gibson a sell-high candidate.

He also handled most of the LDD work. Edmonds utilization profiles as a mid-range RB2 option, and he has a history of producing explosive plays and delivering in the passing game.

WR – CeeDee Lamb will be without Dak Prescott for eight weeks, but he set a career-high in route participation (98%) – a 21 percentage point leap versus 2021.

He led the team with a 26% target share, and 30% of his looks came on play-action. Lamb managed 17 points in Cooper Rush’s lone start in Week 8 of 2021. He should still provide WR3 value with WR2 upside while Prescott recovers, but that should bump back to a WR1 status for the fantasy playoffs, where he could be a top-six option.

RB – Saquon Barkley is a top-three running back the rest of the way.

Barkley averaged 6.8 yards after contact and registered an explosive rush (10-plus yards) on 22% of his touches.

RB – Leonard Fournette registered a solid 15.7 points in Week 1 and might only be getting started. He bogarted 76% of snaps, 65% of rushing attempts and was in a route on 76% of pass plays.

The Buccaneer is a mid-range RB1 moving forward.

RB – Darrell Henderson took on a near-every-down role with 82% of snaps, 81% of rushing attempts, and 78% route participation.

That is elite RB1 utilization.

We could see Akers eventually work his way back into the fold, but for now, Henderson is an RB2 with RB1 upside if the Rams can get their offensive line issues worked out.

WR – Michael Thomas posted 22.7 points in his return despite battling a lingering hamstring issue last week. His route participation (83%) and target share (26%) tied for the team lead, and he gobbled up 67% of the targets in the end zone. The 29-year-old vet moves up to a mid-range WR2 after a great Week 1, and we could be looking at a WR1 once he is fully healthy.

RB – Cam Akers only played 18% of snaps and handled 13% of the rushing attempts serving as a backup to Henderson.

He is worth holding onto, but he shouldn’t be near starting lineups. He is a stash RB option.

RB – James Cook worked behind Devin Singletary and Zack Moss in Week 1. He could still carve out a role as the passing-down option as the season progresses, but for now. Cook should remain on benches and can be cut in shallow formats.

For the full Utilization Report, with all data and charts, sign up for PFF+