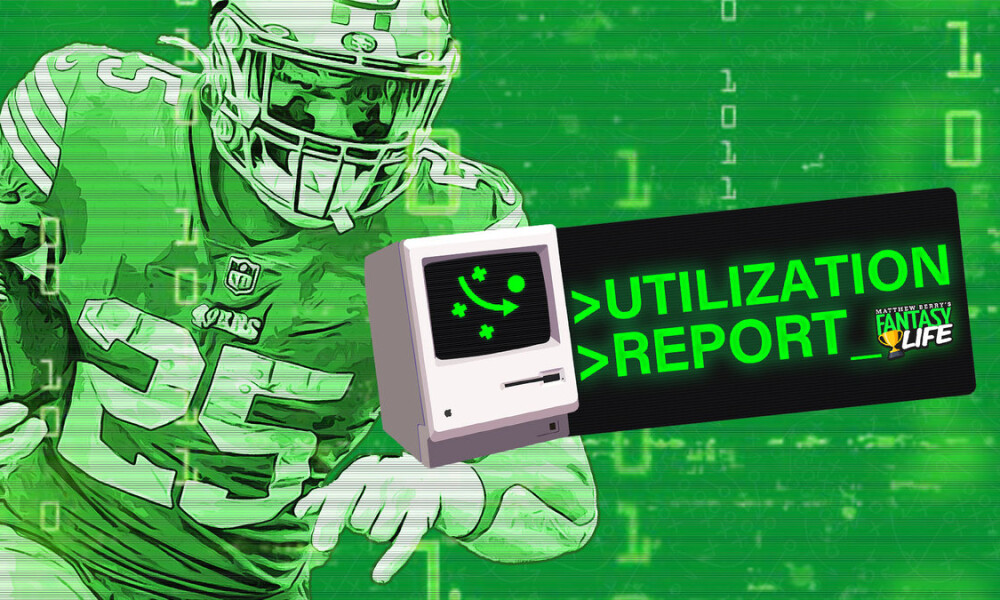 The Utilization Report. Everything you need for the Conference Championship

Smith pulled even with A.J. Brown in target share (28%) thanks to a dominant 43% outing against the Giants. He secured six of 10 targets for 61 yards and a TD in a game where the Eagles didn’t need to throw much.

The former first-rounder averages 20.9 points per game over the last four outings. Smith hasn’t let playing opposite a high-end WR1 keep him from demanding elite-level targets, which bodes extremely well for his long-term outlook.

Smith is a low-end WR1 with high-end WR1 upside.

Travis Kelce posted a massive 35.8 fantasy points on the back of an astounding 17 targets (50%). Despite still being limited in route participation (30%), Toney had the second-most targets at six.

The second-year WR demonstrated an elite ability to demand targets as a rookie on limited routes, and that trend has continued in year two with an elite 26% TPRR. Target rates on limited route participation can be tricky, especially when players see a large portion of their targets come on screens and trick or gadget plays around the line of scrimmage.

While Toney benefits from those looks, he has a 22% TPRR over the last two seasons on non-screen/trick play routes. Additionally, he has a 23% TPRR against man coverage, where 92 of 99 routes have been non-gadget plays. Our sample size is small, but the data suggests Toney is more than a gadget player.

Deebo Samuel has made a living off low-ADOT targets as a yards-after-catch threat. Like Samuel, Toney can contribute to the run game. While he doesn’t have the same lower body build as Samuel, the shifty playmaker has eight carries for 96 yards and a TD.

The biggest red flag for the former first-rounder is that he couldn’t carve out a larger role despite the Chiefs’ lack of target-earners behind Kelce. Typically, coaches want their best playmakers on the field and for Justin Watson to take reps ahead of Toney is troubling. However, if that is the case, Toney still has time to correct those issues, and his ceiling is a WR1 if everything clicks into place.

One thing is for certain; Toney is a polarizing player where opinions typically fall to one side or the other.

For now, Toney is a boom-bust WR3 with WR2 upside.

Hurst has 17 targets over the last three contests. Ja’Marr Chase has led the team in each of those games, but the rest of the targets have been distributed fairly evenly across Hurst, Tee Higgins (17), and Tyler Boyd (12).

With Higgins struggling to take a step forward over the second half of the season, the tertiary Bengals options have added appeal.

Hurst has a low-end TE1 profile.

McCaffrey continues to register sub-50% rush-share outings when Elijah Mitchell is active. CMC averages only 34% of attempts in six games with Mitchell versus 58% in contests without.

The stud RB has averaged 25.8 points in San Francisco during games without Mitchell, but that drops to 16.7 points in games where the second-year RB is active.

CMC is the top RB option heading into the Conference Championship Weekend, but he isn’t the every-down back we have grown used to over the years.

Brandin Cooks, JuJu Smith-Schuster, and Corey Davis are Higgins’ closest career arch comps since the 2011 NFL Draft. Each demonstrated a similar ability to demand targets over the first two seasons, but leveled off in Year 3 below 20%.

Cooks has enjoyed multiple seasons averaging 15-plus points per game as a high-end WR2, which would be a nice outcome for Higgins. At the other end of the spectrum, Davis hasn’t played on as many quality offenses or in situations without much target competition as Cooks. Those factors have kept him outside of the WR3 conversation in recent seasons. Higgins could land anywhere in this range depending on how things shake out in his final contract year in 2023.

Higgins drops to low-end WR2 territory and is toeing the WR3 line.

Smith-Schuster hasn’t eclipsed a 9% target share in the last three games. The veteran still has upside thanks to the offense, but with Patrick Mahomes battling a high-ankle sprain, the offense could look average.

The move to Kansas City ignited new intrigue around Smith-Schuster this offseason, sparking the age-old debate of target-earning ability versus playing in a high-quality offensive environment. However in this case, Smith-Schuster’s target-earning profile didn’t suddenly mutate in 2022 due to Mahomes, a great lesson to remember as free-agent WRs find new landing spots. While the quality of a target can certainly go up in a better offense, we can’t project players to suddenly become better at beating coverage to earn more looks.

The sixth-year slot receiver profiles as a high-end WR3 thanks to the offense, but his talent profile is in the low-end WR3 range.

The Chiefs split the rushing workload evenly between McKinnon (39%) and Isiah Pacheco (43%) despite a season-high snap share for McKinnon (65%).

The veteran RB might be the Chiefs’ preferred option in crunch time, but he didn’t have a target after averaging 5.2 since the Week 8 bye.

We could see Kansas City design more looks for McKinnon next weekend to help out a hobbled Mahomes. However, Mahomes’ inability to move around could allow the defense to play underneath coverage more aggressively.

The second-year back is hardly in a high-end utilization role, but San Francisco ranks fifth in rushing attempts in non-overtime, and runs the ball above the NFL average in trailing, close, and leading game scripts.

This commitment to the ground game and the 49ers’ ability to get into scoring position regularly boosts Mitchell’s outlook despite a limited role. San Francisco’s offense converts 44% of their drives into scores, the second-most in the NFL.

Mitchell is a boom-bust RB2.

The Eagles smashed the Giants’ run defense for 268 yards and three TDs. Kenneth Gainwell accounted for a season-high 28% of the rushing attempts, but much of it came in the fourth quarter, where he handled 69% of the RB rushing attempts.

Goedert delivered 16.8 fantasy points in his fourth game back from injury. He has target shares of 9%, 19%, 23%, and 22% since returning, and has bested an 85% route participation in each game.

Pascal surpassed Quez Watkins in route participation (41%), which wasn’t due to blowout conditions. Pascal registered 44% in the first half, while Watkins was at 22%.